I can confirm when I went into Google Pay it still had the warning, but tapped the “check software” button and it pops up to say everything is ready to use. Perfect!!

They could easily have included the March patches, too. But good to see that at least something is happening at Fairphone (or its outsourced software development partner in Greater China). 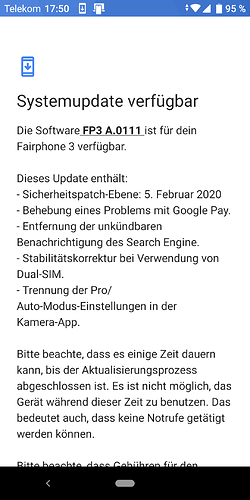 On my FP3 it says there is no update? How did you guys update?

It might not be available to every FP3 user immediately. Try again later or tomorrow.

It might also be an issue with your telecom provider. Especially Vodafone customers recently reported not getting the updates.

What has my provider to do with it? I bought the phone free from my provider.

Would be my first guess, too, but several users have reported it (read the following replies there as well):

Has anybody received the latest security update yet? Fairphone 3

Hello, I have the same problem here: still on security level December. Bought mine from memo AG in Germany in October last year. I had since then two updates (or maybe only one - sorry, can’t remember yet) without problems. I contacted the support today. I hope, they have an answer.

Surprisingly, they all bought their FP3 it without a contract and not from their telecom provider.

Thank you for the answer. That can’t be it. I bought the phone direct from the Fairphone website. But I will wait. Until then I’ll use my old phone for Netflix.
Just a thought: could it be a language thing? My system language is Dutch.

Android updates are distributed in a staged manner. So if you’re not seeing it right now, try again later tonight or tomorrow morning.

No, the language should not matter at all here.

That can’t be it. I bought the phone direct from the Fairphone

That’s exactly what Urs is saying and people reported in the topic he linked: even if they did not buy from the provider (but directly in the Fairphone shop or other reseller) they were - supposedly - affected by the provider’s alleged settings/restrictions.

Since installing this update, I get random crashes on some apps (at least 2 games so far). App freezes, phone reboots. I think I’ve never had this behaviour on the FP3 before, and the system was generally very stable within the last months.

I deactivated SIM1 with Vodafone and switched off WIFI, the update was immediately available via Telekom SIM2.
just for info…

I would use a second sim, if I had one, but I don’t… And removing the sim card doesn’t help, so I don’t know how to get that Update (or the one before

So how can I get the update with only a Vodafone sim card? And why is the ability to update an operating system dependent from my provider? I dont get it.

And why is the ability to update an operating system dependent from my provider? I dont get it.

Hi. My guess is that it happens with providers who also sell FP3’s (Vodaphone in UK, Orange in France…). These are probably configured to update via their servers (probably in order to add or maintain a bit of bloatware…).
The FP3’s bought directly on the Fairphone website are identified by these providers as FP3s. I guess there is then some kind of configuration problem, maybe with Fairphone’s servers : they identify an update request emanating from a FP3 using a Vodaphone or Orange SIM and this request is blocked because there is probably some kind of rule specifying that all FP3’s using thses SIMs should update via Orange servers. The guy who put in that rule probably forgot about all the owners who didn’t purchase their FP3 via the provider…
I’m no tech or network expert, so my guess might not be accurate technically but it looks like something like that.

I’m still on the December patch… Got my Fairphone in December from Belsimpel, but I do use a Vodafone sim. It’s strange, though, because Vodafone doesn’t sell Fairphones in the Netherlands.

I bought the Phone directly from FP. But I remember that after first start two Vodafone apps were installed. So did anyone wrote a ticket to FP? So they know about this issue or not? They should be able to call Vodafone so that they can fix things.
Still dont get the sense why I need the permission from my provider for doing a OS-update. I mean wtf.