I’m on FPOS 19.11.2 and when I used the phone for navigation recently again I noticed that sometimes the GPS performance was not sufficient (couldn’t get position). Osmand reported around 32 possible satellites and usually used 6-7. Long time ago when the phone was new I can remember that the phone got the fix much quicker and also used more satellites. So I checked with SatStat and my assumption was right: The phone sees many, many satellites but only uses the GPS ones (see the colour). 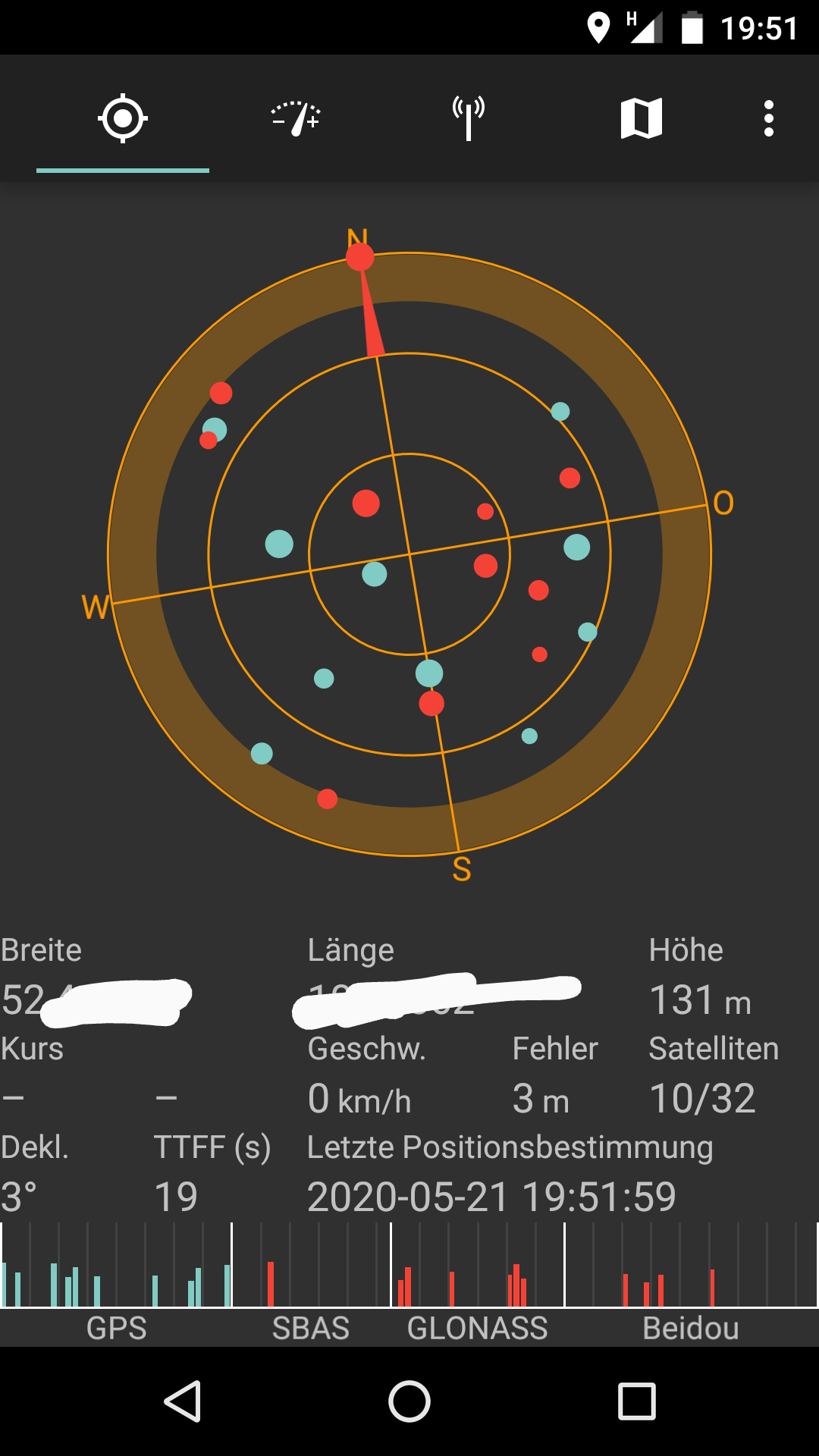 I even found a bug report in the bug tracker from last year but with the current update frequency I’m not too optimistic about any improvements here. How about FP Open or Lineage OS? Does the problem exist there, too? Does anyone of you not have the issue on the last FPOS?
I’m a little bit annoyed that something that used to work well in the past got corrupted by a software update :-/

Fix of 6-7 satellites are quite sufficient to experience a good localisation. Usually the device fixes only some, especially the ones on the horizon doesn’t make too much sense to include when some more or less in the zenith are available.

With LineageOS 16.0 on FP2 I found “GPS” Fix very fast. Currently you get the Android 10 version LineageOS 17.1 and about this version I heard different point of views on “GPS” fix speed.

Just to cross-check, you could use GPSTest (Play Store / F-Droid).
You can change the sorting of the satellite list there to list first which satellites are being used for the current fix (Flags include “U” then).

Nope, the GPS satellites are red first, too, but turn blue once they are shown as used, too. I’ve done an experiment with a Garmin GPS device for reference. There I can turn off Glonass so that it uses only GPS. And under the same conditions it then used +/- the same number of satellites as the FP2. As a next reference I used an Unfairphone with Osmand and within no time at the same spot it used twice as many satellites - just like the Garmin after switching on Glonass again.

I agree for a simple localization but it sucks when approaching a complex crossroad with difficult reception conditions by car where Osmand tells me “GPS reception lost”. That is how I actually noticed that there must be something wrong. It wasn’t that way with Android 5 or 6 as far as I remember.
My screenshots are taken after standing still or only moving slowly for some minutes without any bigger obstacles for satellite reception to allow as many satellites to sync as possible.

GPSTest (Play Store / F-Droid).
You can change the sorting of the satellite liste

That confirms what I’m saying: 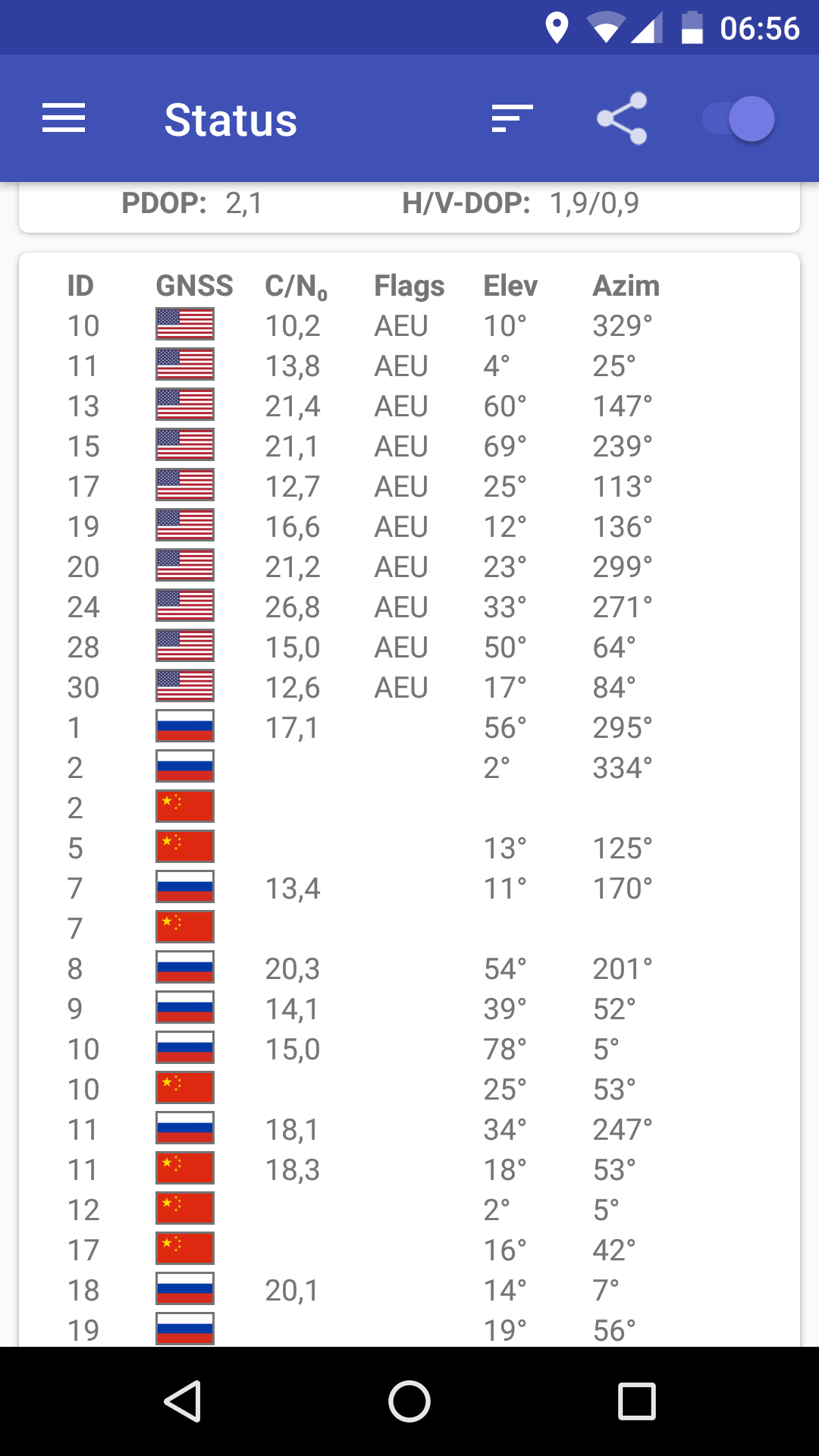 What is the output there for the other OSes?

From my research it seems that such issues can happen when updating to Android 7:
https://support.google.com/nexus/forum/AAAANseOu18xb838rmYT_4/?hl=en&gpf=d/topic/nexus/xb838rmYT_4

What is the output there for the other OSes?

Does anyone know whether this utilisation of satellites sits in the #modemfiles?
(In which case an older version of them might help, but perhaps reintroduce other stuff which was fixed in the current version?)

Update: Just tested this again with the latest LOS 17.1 build and this time the phone happily uses GPS and GLONASS satellites. Unfortunately I cannot say for sure which change brought this back but given the fact that the modem files weren’t changed for quite a while it looks like they are not responsible for this.
In the LOS changes for the next build however there’s an entry saying gnss-legacy: Bring back Beidou. We’ll see if with this change the phone will use even more satellites because as you can see in the screenshots above it does see them already. And that also gives me hope that Android 9 for the FP2 could have a better location performance again.

Update (2): I installed LOS from today with the change mentioned in the change list and indeed, now the FP2 states that it is even using Beidou: 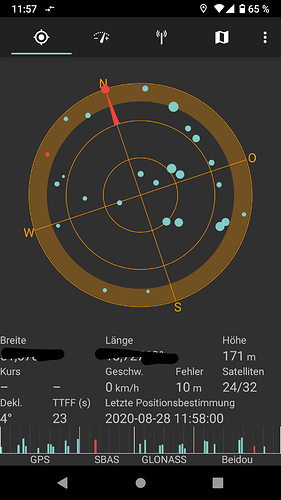 Update (3), I thought it wasn’t needed but today under the clear sky I discovered that the phone picks up more and more satellites until the overall number is 24, then it falls back to GPS only, no GLONASS, no Beidou. As long as the number of satellites is low enough (did my previous tests at the window, not exactly outside) this doesn’t happen and it uses all three services.
I will keep on testing this from time to time again to see if it changes in any way…