I’m not sure, because usually I am too impatient to wait for it to switch on again (mostly because it happens when I am in the middle of something), but there have been times that after frantically pressing the power button a million times, the screen turned on again and the software worked fine. Not sure whether the clicking actually worked, more some psychological response to feel like I have some sort of control I suppose.
Also when my phone crashes, it reboots automatically. Yes, also this happens a couple of times a day, but since basically everyone here has that issue, I gave up on that problem to get fixed.

Yeah I still have the problem too. But Recalibration worked a bit. So not as often as it used to be. yay…never buying something from FP again

No need to be drastic, just really hope there is a fix for it. Anyone?

when I call, the screen gets dark and I can’t hang up . Is there a solution or a parameter to change or is it a default of the fairphone ?

@Chairr22: If your phone crashes, you are in the wrong topic. This one is just about the black screen during calls.

A post was merged into an existing topic: FP2 proximity sensor not reliably turning off screen during calls - See first Post for Workarounds

though the proximity tool app is installed.

Can’t you just open the proximity tool app directly? On my phone, this is possible…

It does not appear in my “All Apps” list.

It does appear in Google Play as an installed App, but the is no means to"Open" it.

That’s weird… it just appears in my “all apps” list. Can you remove it and install again? Maybe that could work?

Edit… After looking at your screenshot, it seems like I have an other app!
I have this one installed: https://play.google.com/store/apps/details?id=com.mobiledirection.proximitysensorreset

the Fairphone proximity sensor app is located under Settings/Maintenance, along with the checkup and the hiccup ones.

That is quite a different app. It is by a third party.

It does attempt to do the same thing, but always to fail. I shall try again after rebooting.

“there is no maintenance section in my settings men”

What language is your phone set in? Maybe it’s not very clearly translated?
For me (in Dutch), it’s under “Onderhoud” 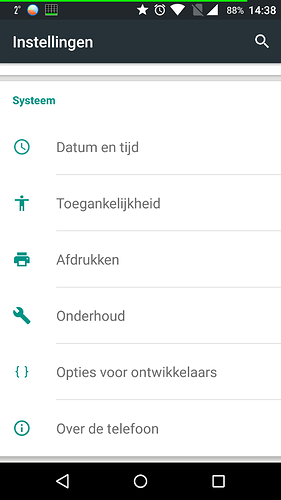 The problem is now solved.

I could not find the “Maintenance” section if “Settings” because it is
masked UNLESS you are running as “Owner”. I was running as a “User”.

Your third-party tool probably failed for me for the same reason.
Unfortunately, it’s failure is silent, either because if its own design it
because the OS is not supplying a useful failure code.

Logged in as “Owner”, I reinstalled 1.10, selected “Settings | Maintenance
| Proximity” and successfully recalibrated the proximity sensor.

Can i ask if there is any fix to the proximity sensor problem. I have had a FP2 for almost a year now and then after a couple of weeks the screen went blank during a call and did not reactivate when finishing making it impossible to end the call yourself. I know the work arounds which I have used. Make the power button disconnect the call which is easier than removing the battery! and cleaning the sensor which works for a couple of days before it gets dirty again. The most annoying part is not being able to press numbers during a call when calling a company and you are confronted by a menu system requiring choices.
The problem clearly stems from the proximity sensor not being protected enough from dust etc. which is a physical error with the design of the case I guess.
Is there any hope of a fix. One possibility is to change software to be able to ignore the sensor during calls and add a lock button to the screen to prevent other buttons being pressed (default is on but can be pressed and held to release the screen).

There has been a fix implemented a few updates ago.
Just update to the latest software version and go to settings, maintenance.
There you can recalibrate your sensor.

Thanks. It is working again!

Also clean your display properly in advance for recalibration and keep it clean as well specifically the top area where the sensor is located. These were my startup troubles until I knew better.

but since basically everyone here has that issue

I can tell you for sure, mine does not.
Maybe an app crashes sometimes, but the task manager / exception handler usually knows how to take care of the situation to not have the entire OS crashing.