To avoid issues with the proximity sensor when the screen has moved a bit down (can see this because front camera isn’t centred), I pushed the screen into the right place by pushing the phone against a table at its front corners. But, every time the phone is hit at this place, it suddenly restarts. Seems like a hardware problem - the screen is not properly attached?

Seems like a hardware problem - the screen is not properly attached?

Sounds like it. Try disassembling and putting it back together again.

Will try that, but can a faulty connection to the screen cause the phone to reboot? I would have expected just screen issues in that case.

You’re right, maybe you should take out the other modules too, there could be a connectivity issue anywhere within the hardware…

I had the same issue and it was getting worse to a point where the “shocks” from jogging triggered a reboot.
I figured it was the battery contact. So I attached a silicone stripe to the bottom of the battery. The battery sits now tighter and is pressed towards the contacts. I had no accidental reboots eversince…

I had the same issue and it was getting worse to a point where the “shocks” from jogging triggered a reboot.I figured it was the battery contact. So I attached a silicone stripe to the bottom of the battery. The battery sits now tighter and is pressed towards the contacts. I had no accidental reboots eversince…

My battery also feels a bit “loose” so that sounds like a plausible explanation. The phone did not reboot when it fell flat on the street yesterday (screen down, nothing broken), so it’s apparently shocks in vertical direction which trigger it.
At this point I don’t want to break the phone accidentally by trying to take it apart, I need it for gps when hiking in Norway this summer. After that I’ll perhaps take it apart to see if I can fix any of the minor issues I’m experiencing with the phone.

FP2 was designed to be opened by anybody without risk of breaking anything by accident (and without loosing warranty).

I had no more reboots after I pulled a bit on the battery contacts at the frame. Be careful, do not break them.

I started to get problems with the phone rebooting after taking very minor hits or being “shaken” after just a few months with it. I had never taken any of the modules apart, I had just taken the battery and SIM-card in and out. But after applying some Blu-Tack between the battery and the back shell I haven’t had the problem.

As a lot of people coud have this problem I encountered, I decided to write this poste.

My problems I had:

I tried different cables and nothing changed.

Then I analysed the contacts and the battery and I noticed the following:

The battery was moving a littlebit when it was inserted into the phone. I started the phone and moved the battery. It did restart like it woud do with the shaking.

As a result my phone charges normally and it does not restart anymore. If you have a Faiphone 2 i would recomend everyone to check if the battery is inserted thight! realy tight! No moving! Nothing! Contact problems can cause a lot of issues like blow up when it charges not correct, wrong measured voltages of the phone and as a result wrong charging and therfore a shorter liftime of the battery. Contact is everithing in electronics!

I moved your post here, since this issue + sulotion was already discussed here.

Yep, it’s the right place to use them. Also, why don’t add one one or two “thumb-nail” screws to add some extra stability and connect it? I they go the extra (IMO unnecessary) mile to create their own battery, make one that is better.

niveIn gave an interesting hint in the discussion about FP2 random reboots: He/She fixed the phone’s battery with a piece of paper.
I also got some - not too often - reboots with the two FP2s we have at home.
The last one happened just when I put down the phone on the table - very gentle. It rebooted instantly but showed a very unstable battery charge level afterwards, “shooting down” from about 60% to 19%, 2%, 1%. After pressing on the back of the phone it went up to 20% where it stayed constantly.
After playing around a bit I managed to reproduce the “scenery”.
The battery usage diagram both times showed a short blank space, the charging level was remarkably lower after the reboot: 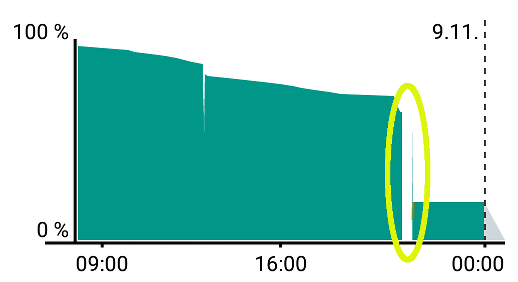 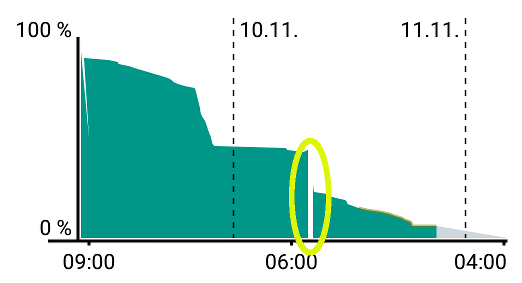 To me it looks like the battery moved a little bit which led to short-circuiting something, an immediate switch-off (loosing the latest battery stats/charge-level-data) and draining a lot of energy from the battery.

I also fixed the battery with a little piece of paper so that it won’t move any more - and had no reboots any more.

Anyone else experiencing reboots with “drop-outs” in charge-levels?

I had the same problem, and solved it the same way.

Since then, I dropped my FP2 quite often but it didn’t reboot!

Hey guys, it's been a long time since my last post in here. Have had my FP2 since February and I'm still a proud owner. However the phone has become more and more annoying to me in the last weeks: Apart from occasional screen freezes (which have been discussed on this forum already but I haven't had the time and patience to mess with the suggested workarounds yet) my phone tends to reboot on slight bending pressure. Even when I just get the phone out of my jeans' pockets or when I sit down w…