They will send me a replacement cover, hopefully that solves the problem.

Did they explain why they believe a new cover will solve the issue? It doesn’t make sense to me unless the new (slim) covers somehow stabilize the battery.

Thanks for your message, we’re sorry to hear that the back cover of your
Fairphone 2 has a factory fault. We are currently investigating why
this is happening in order to improve the production process of our back
covers.

We will be able to solve the problem you are experiencing by replacing your back cover.

It makes sense to me in a way as the problem did not appear before I had the deformation of the back cover around the volume buttons and maybe the cover is deformed in other ways, too.[quote=“paulakreuzer, post:21, topic:23010”]
It doesn’t make sense to me unless the new (slim) covers somehow stabilize the battery.
[/quote]
They are going to send me one of the standard covers so I won’t know if slim covers work any better.

unbelievable but true! It works 100% I have lived the last 48 hours without crash, so far it was so that I had at least three crashes a day! After I have tried the total of the paper. Nothing, no matter what I try the Fairphone 2 reboots not! Mega Why study when it is so easy!

easy play easy win! If only it were always so! Now it is a really great product !!!

I read manytimes about this “Paper-Solution” and then i seen something waht can be the issue for this problem. I have more than one accu, one of them i usually never used befor so it is still like i became it. There i see a problem … some part was missing! It was a smal black piece on the other Side of the contakts. I found it in my pocket and i could repair it but if this were my only akku i wouldn´t seen any diference. After the missing part is back the accu fits much better. I show you this part in pictures:

the other sinde marked

Maybe this could help to geht the Problem fixed. If the accu do not look like this pic please try to contact the support and get maybe a new accu.

Mine does exactly look as your picture, but I had the problem and fixed it with some layers of paper.

But it’s a nice finding! Maybe some more people do not have the black piece and reboots due to that.

A post was merged into an existing topic: Slim Case - Reboots and Button-Issues

Having the slim cover for a few weeks now, I can confirm the “trouser pocket reboots” caused by pressure on or bending of the phone.
I will of course try the fix with paper.
On the other - hand in my opinion - that solution can not be considered a “standard”.

I guess some constructive matters should be taken into account.
Maybe something like a magnesium frame (like in cameras) integrated into the back cover for stability reasons, which of course would result in a bit more weight and a higher price tag.
Another idea might be a screw as near to the center of the back as possible. Opening and closing for changing the battery or other modules would take some more time and a tool and the mainfraim of the phone would need reconstruction, if possible at all. Most likely it would be more difficult to construct a screw or a kind of lever that could be released more easily (e.g. with a coin or the fingernail).

Just a few ideas that came to my mind, after my phone did reboot for the third time today (being offline in my trousers for a long time without me being aware of it). The battery-status is erronous as well. Dropped after the last reboot from 31 to 19 and then within 10 minutes to 1 percent, where it is at since more than 4.5 hours.

Freaky, but funny as well.

I haven’t contacted support on this issue, as I decided to be able to cope with a phone havving a life of it’s own…

The status reports for the battery are mostly back to normal since I did a kickstart.
The reboots happen ever once in a while. When they happen, than it’s regularly a few reboots in succession. But there are days without any reboots; I just check the phone more often now.

Got my FP2 in mid October. I noticed the first reboot maybe 1-2 weeks ago, since then it sometimes reboots when I put down on a table (not throwing it

but not being extra careful either) or when it’s in the pocket of my jeans. Noticed some weird drops in the battery stats, too, but didn’t connect the dots until I read this thread.

edit: I just remembered that I experienced something weird a while ago - during loading via USB connected to my laptop, it actually didn’t load but somehow the battery got drained to a point where the indicator led was blinking red and the phone wouldn’t boot. After I got it running again, the battery stats stated that during the time of the drain the torch light was active (even though I didn’t notice that and I think I would have)?
I think that was before the first reboot happened, not sure if it’s connected though.

Very interesting, please report back your findings, many thanks in advance! 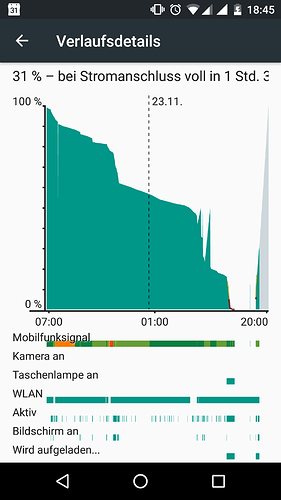 This shows both the drops/peaks in the battery stats and the weird “Taschenlampe an” (torch light active) thing. (Sorry if the latter is OT).

@matze74 have you tried the paper workaround (2nd post is marked as solution).