FP2 not rebooting after updating to 21 / Android 9

Thanks for trying to help! But I kind of cannot use your information. I have a “bin-darwin” a “bin-msys” and an “images” folder. ok, so I open the images (?), with 11 files (boot.img, … tz.mbn) in there. but what is the partition and the {partition name}, what the {partition file}? I try to do all that in the images-folder with the promt-windows-power-shell-surface?

(while trying it with “flash-for-windows.bat” it fails always with the big files 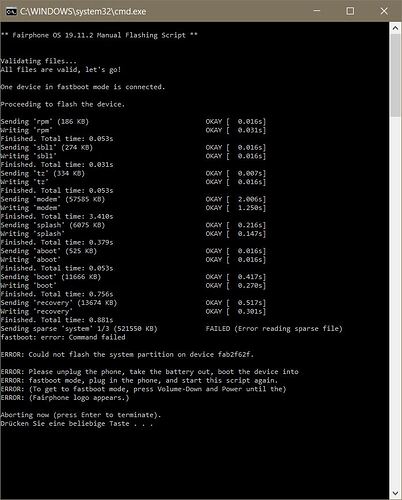 Thanks a lot for trying to help…!

Although I did not get completely your second phrase (to abstract to follow…), I tried the first part. Didn’t work to flash TWPR… while flashing… information an the FP2 (I did choose the last FP2-TWRP.img):
…
verifying update package …
E:footer is wrong
…
E:Signature verification failed
E:error: 21
Installation aborted

(I tried it several times, always the same…)

(Kind of (mega) frustrated in the meanwhile from FP; no real help & support from the FP-company; most probably, I will change the company)

Last time I saw such symptoms was on a briccked phone, I do hope it’s not your case.

Hi, hoping someone can help. I have the same error as Axel S posted yesterday: “ERROR: Could not flash the system partition on device.”

The update didn’t work via the Updater app earlier today - my phone got stuck on the ‘Fairphone’ start screen. So I tried to manually install 21.03.0 but it didn’t work. Here’s a photo: 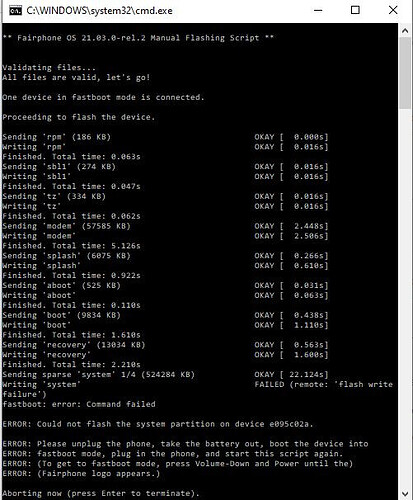 I also tried 19.11.2 but that gets an error immediately: “The system cannot find the path specified. ERROR: Checksums do not match, try to download the manual update again” 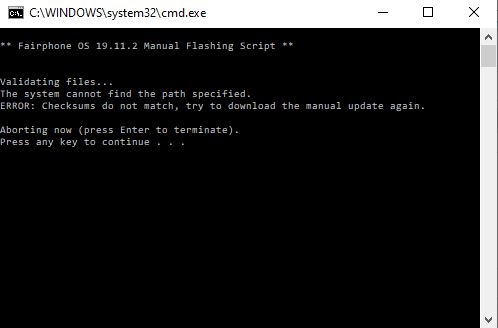 I have tried two laptops. My newer laptop seems to have a problem with the driver. Actually I have never connected the phone to that laptop as I’ve only had the laptop a few weeks.

I am stuck and not sure what to do next, I have spent hours trying things. I read the messages above, but I am not very techy so not sure what ‘flashing each image manually’ means, for example?

I would really appreciate some advice with this

I think the relevant error message is “The system cannot find the path specified”!
Did you extract all files from the zip before starting the batch file (which you should do) - or did you start it from within a window showing the content of the zip file?

Hi Volker, thanks for your message. Yes I extracted all the files from the zip when trying both the updates.

I also tried 19.11.2 but that gets an error immediately: “The system cannot find the path specified.

19.11.2 makes no difference according to the screenshot of @AxelS above.

Else … The error message you got usually is a sign for trying to run the flash-for-windows.bat inside the ZIP file (as Windows can treat it as a folder you can operate in), you would have to unzip the ZIP file first.
I hope you have a backup of all your important data before you perhaps successfully run this. It may be a downgrade at this point, and if it even works, it may require a factory reset to boot successfully.

I would really appreciate some advice with this

To play it safe I would advise to contact support … https://support.fairphone.com/hc/en-us … but that is not a fast option, unfortunately. Calling them might get faster results, but not on a weekend.

I thought about what I would try in this situation … but I have a backup of my stuff before any update, so I can be intrusive and accept the loss of my data on the phone … anyway, things to try …

Out of further ideas for the moment.

Files extracted from zip sounds good. Still there must be a reason for the “system cannot find path path specified” message. It must have a logic reason. Something must have been done differently during the attempts to install 21.03.0 and 19.11.2 as this is still a windows/batch execution problem and unrelated to the FP2 device…

Thanks for the messages.

I have downloaded again but still the same error message. I deleted the previous 19.11.2 files and downloaded them again (from here: Manually install Fairphone OS for the Fairphone 2 – Support ) I extracted all from the Zip. So I am not sure why I get the ‘cannot find file path’ error.

I will see if I can try AnotherElks’s ideas, thanks.

To answer your question I downloaded the 21.03.0 files here: Manually update Fairphone OS using Windows – Support, but I guess it’s not the correct thing, thanks for letting me know! Though I was hopeful when I got further than my 19.11.2 manual attempt.

To answer your question I downloaded the 21.03.0 files here: Manually update Fairphone OS using Windows – Support, but I guess it’s not the correct thing, thanks for letting me know!

Actually, that looks legitimate, I just didn’t look there. The offered downloads could use some consistency across the pages, I guess.
I edited my earlier post accordingly.

So do you mind highlighting which tips above should I follow from your post if it fails with “ERROR: Could not flash the system partition on device” again?

I’m not in logical territory here (as what’s failing for you should work from a logical point of view, I think), so you can try all of them, even if I just compared the manual install file with the manual switcher file and fastboot.exe and system.img are the same, so I have not much hope for that one making any difference.

it finally worked out and I could manually install the previous version. I don’t know why it succeeded this time, I already gave up one week ago and gave it one last try. Seems like my data are still there. Many thanks to all of you!

Hi - Good news, I tried the Android 7 19.11.2 manual update again this weekend, and after around 10 attempts it worked. So I have a working phone at least!

I did try the Android 9 21.03.0 manual update again, before trying the Android 7 update. It didn’t work, though it failed at a later stage this time:

It previously only got to 1/4.

I tried loads of times. I took the battery out and put the phone back into bootloader mode each time, but the update just didn’t work. I also changed usb cables.

Thanks to you and Volker for your messages last week

@scribe, @urs_lesse: Again thank you very much for your help back in April! My fairphone worked again

Still I have to update manually to the new version of Android. Best

Thanks for the help; sorry, that I did not respond so far. I cancelled all tries to fix the FP2; soft-brick (?); took me too much time and energy; also decrypting what really to try & do next is for non-professionals quite difficult

; anyhow thanks for your advices! because the remaining data were anyhow lost, I decided to get a FP3+ (and still hope, it will work better…); after ordering it on May 11th, I got it finally yesterday