I have one with a broken mic, not sure it’s completely dead. Can test, however, not sure that I really understand what you’re doing. You put the cable in normally and then you give a bit pressure with the cable upwards? Just wondering if this is a good advice for a daily use, as I‘m wondering if this would not break the UŚB port faster. How long/often are you doing this?

It makes sense that this could temporarily resolve the issue, much like twisting and squeezing the phone - by deforming the module you’re improving contact between those pads and the shield. You’re probably not doing the module any favours though, like @yvmuell suggests.

Hello
I read your words here and I am also one of these FP2 owners with problems with the bottom module. Its now for the third time… I cannot telefone and often not send spoken messanges. I made the updates, opened it 2 times, not really better.
Also to load it is diccicult, only in the complicated positions.
But anyway, you may have one more bottom module to sell?
Thank you very much
alessandra

You put the cable in normally and then you give a bit pressure with the cable upwards?

No worries, it’s the module I have built in my beta FP2 that I rarely use for recording, I just noticed that once. Btw., if I’m not mistaken, that’s also the module whose USB port I resoldered some time ago, so I’m wondering if this isn’t the real problem.

Also, this way I discovered that the app Simple Recorder on F-Droid can also record with the secondary mic, which isn’t the case of any other I tested, if that can help someone.

I’m finding that this solution doesn’t last - the solder balls push the shield outward over time and the problem reoccurs - this has happened to one of the two repaired modules that have been tested.

I’m looking at spring contacts now, so instead of a ball of solder I solder on little springy fingers that will keep contact with the shield.

So this may take a little while longer, alas.

Edit: just ordered two different leaf spring contacts, we’ll find out how well they work in a couple of days. I just scavenged some spring contacts from an unsalvageable bottom module and soldered them to a broken one, and they seem to do the trick.

Edit: they finally shipped them, I hope I can try it out tomorrow or Wednesday.

I am in the process of trying to repair two bottom modules. One with the USB problem and one with the microphone problem.

I started with the one with the USB problem. Since I have the module apart anyway, I figure I will be proactive and try fixing the microphone before it breaks.

Due to your experience, I had a few questions regarding the fix. I would appreciate it if you could be of assistance.

Question 1: How did you get the PCB out of the shell? I attempted to pry it out from the top, but I get the feeling it will break or get damaged if I pry too hard. I was thinking of heating it up to loosen the glue and then trying to pry it out.

I was going to put some solder on the three golden contacts as you describe above. However, in your last post you say this fix does not last.

Question 2: Would it make sense to just put a very small amount of solder on the golden contacts? From your picture and description it looks like the balls are large and push out the shield. If you just add a very thin layer of fairly flat solder (not a ball) to the contact, could this maybe make the solution last?

Question 3: You said you used some spring contacts from an old bottom module. Which ones do you mean here? Could you post a photograph of them?

I went ahead and repaired the first module. Now I am able to answer my own questions.

The answers will hopefully help anyone else who might attempt this repair.

Question 1 answer: I pried the PCB out of the shell. This was done by starting at the top and using something flat (e.g. a small screwdriver) to minimally dislodge the circuit board.

Once the upper edge or a corner is “free” enough you can just get underneath it, take a heat gun (a hair dryer will also work) and heat the PCB up to loosen the glue. The photo below shows the backside of the PCB. I drew a red line to show the areas that have glue.

This lets you know where you can move the prying tool in order to dislodge the glue, and also keep from hitting any connections or components. 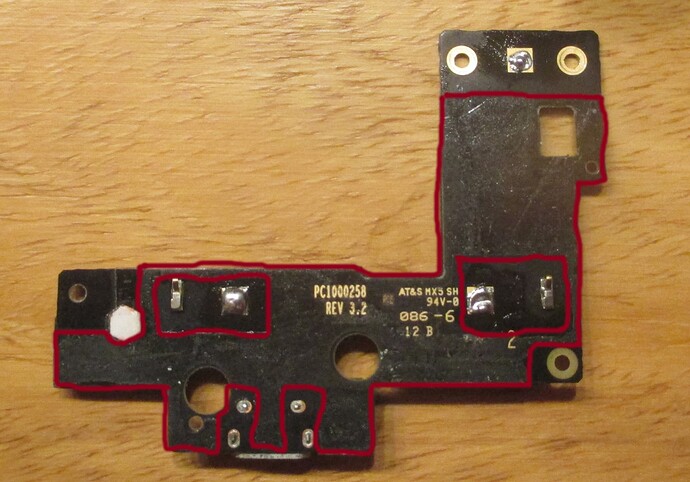 Question 2 answer: As you can also see from the photograph above, I put a small amount of solder on the golden contacts.

The golden contact at the left looks like it has a big ball, but it is in fact almost flat. The two golden contacts at the right have a very thin layer of fairly flat solder (not a ball) on the contact.

The microphone works. But it is too early to say if this solution will last any longer than the one from robert.f using the balls of solder.

Hope that helps someone out there!

Cool! Hope it lasts. I’ve tested two so far, the first one stopped working properly and the second still works right now. I’ve ordered some of those tiny leaf springs so I’ll test those right when I get them and report back here. I’m hoping I can get to a stable, reliable fix.

Just to link another post reg soldering broken mic, in case it somehow helps (I’m lost with all this, so apologies if you were aware or this actually the same repair)

Hi, I also want to share my experience with repairing the microphone. From one day to the next my microphone didn’t want to work anymore. This was not the first time but now, I can’t buy a new bottom module… I read a few times that the pcb tracks are maybe cracked. So I opend my bottom module, heated it up to soften the glue and the solder and removed the microphone from the pcb. And the result was: All three tracks are broken (now)

(see picture below)… The solderpads of the pcb were …

Update: I received the leaf springs, they were a little too high but they were easily cut down to fit the available space. I soldered three into a module and it works perfectly - I’ll be testing it for the next week.

And if it keeps working, I hope to finally be able to start fixing modules on a larger scale.

Pretty cool. I just did my first teardown, and went a bit too strong on the two metal springs, which I sheered off with my guitar pick…
Wouldn’t it have been easier to take away the metal sheet instead of pulling off the PBC plate?
Well, now I have some more soldering to do…
Where did you get the leaf springs?

Yeah now I’m thinking I can just remove the shield, clear out the sponges, make the holes in the plastic a bit bigger and then solder in the springs.

Contact is still not that reliable, though. Sound always comes through, but it often takes some tapping and flexing to get rid of background noise.

I think I can connect all three squares with some coated wrapping wire that I then connect to the shield (or some more convenient grounding point if there is one)… That way, all contacts are soldered, so you’re no longer relying on friction. It would still necessitate a full disassembly, but it would be a solid, reliable fix at last.

I got the springs from Otronic, they’re pretty cheap. They’re small but I still needed to carve out the holes in the plastic, and they’re too high so I had to cut off part of the springs to make them depress further. But like I said, this is still not a reliable fix. I’ll try out the wire idea tomorrow and report back.

I soldered in a wire. It runs from square to square to square and then to one of the screw holes next to the big module connector - and it works! It still took a tap to the phone to get all the noise to go so it isn’t perfect, but that probably has more to do with the amount of experimentation this particular module has been subjected to.

I’ll be testing this mod for a week, again. Hope it keeps working, but I don’t foresee any way this could fail. No longer dependent on friction, not sensitive to deformation of the module.

Protip: cheapest way to get thin coated wire is to take apart an old appliance with a transformer, or an old transistor radio with a bunch of wire wrapped inside.

Woah, that’s great! I will do that! Can you post a picture so that is clearer to me? But I think I got it anyway. I’ll try that!

and to solder also a wire as @robbert.f described. Well, it didn’t work for me. Hmm. Why that? Any ideas?
(I got the wire from an old telephone cable.)

I think that as long as you have those points all connected to each other and the wire connected to ground, it has to work unless something else broke. The mic is just barely surface mounted on there, I’ve knocked one loose before.

But here’s an enhanced picture of a revised setup. 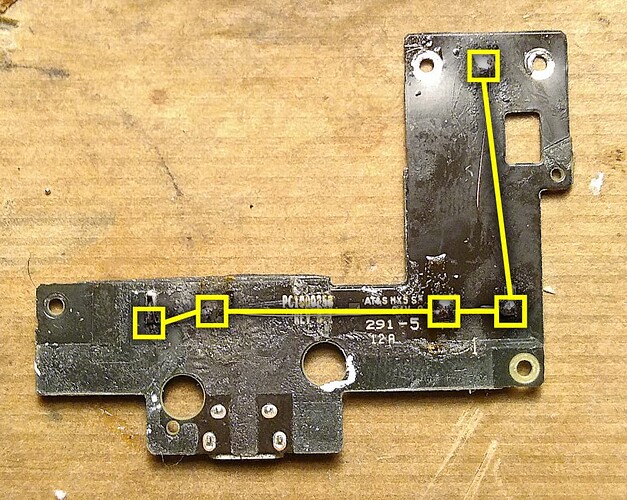 Don’t mind the battle scars - this module has been through a lot of experimentation and to its credit, still works.

The wire goes from one spring to the pad, to the next pad, to the other spring, and then to the final pad.This wire is quite thin so I may try replacing it with something thicker but honestly it shouldn’t make a difference. Sounds great!

Oh, great! You give me new hope! Your module looks horrible, and it still works… I will get mine to work, too!

I am back to my soldering iron, too!

Hello robbert.f,
here is ale6 one more time, I wrote a time ago, in december. My english is not so good. But I wanted to ask you: can you repair the bottom module (microphone) from the FP2? Or do you have one? Mine is broken and fairphone does not send them anymore. I´m sad about this. It would be great to become an answer if there would be a possibility that can help me.
best regards

Not necessarily what you’re looking for, but did you consider this possibility?

From the bottom module page: For all Fairphone 2 users whose device is not covered by the manufacturing warranty anymore, we are also able to offer you a refurbished replacement bottom module via a repair by us, however we don’t cover these costs. I didn’t remember having seen this before, the web archive tells me it wasn’t here on Oct 7th, but Google Webcache tells me it was here 4 days ago. Has anyone contacted Fairphone and actually asked for this repair?

Hello Alex,
are you german? So we can write in german.
I´m waiting for an answer from fairphone for the possibility to send my FP2 to repair it but they didn´t answer yet. It is always during a lot of days…
I hope they will try to repair, I think it is what you mean?
best regards
alessandra