FP2 encryption does not work anymore

I have been using encryption on my devices since years.
Worked fine on my FP2 (but still not able to encrypt the external storage)

New issue:
Phone says it’s encrypted. But it does not prompt for decryption password anymore when booting!

Unable to “decrypt” it, nothing happens in the security setup menu

It is possible that it is still encrypted but the second layer (your pw) got lost. I have read before that this can happen, sometimes together with os update ( can’t find it right now).

Have also a look at this:

There are two layers to encrypt the /data partition, one that is built into the hardware, and one is the password or pin you enter, and they are supposed to work together/be combined. So it should be possible theoretically that the encryption is in place without your password, by only using the hardware key. I also experienced that already a few times during updates or OS changes that encryption seemed to be in place though I didn’t get asked for my pw, which is not the behaviour I expect or w…

Phone says it’s encrypted. But it does not prompt for decryption password anymore when booting! 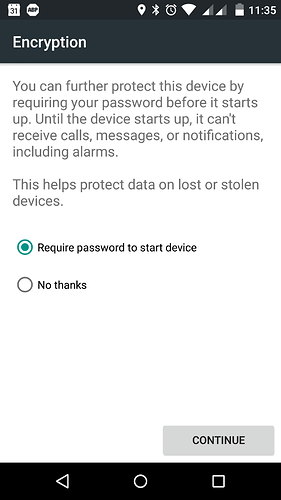