Well, finally I managed to upgrade my old FP1U to Android 4.4.4, thanks to the great work of all the guys in Kitkat for FP1. I was hesitating to do so, since flashing a device wasn’t something I dared to do… especially with my everyday-use-phone! (If I had had an FP1 lying around which wouldn’t serve for anything, I would have done it earlier!)
Luckily Urs wrote a nice guide, and I “just” followed it… I run in some difficulties. But now it works.

But I wanted to put Xposed and GravityBox on it, like on my 4.2.2. before - there are some nice tweaks! So I found here the right installer Xposed for Android 4.4.4. I tried first an 2.7.1 version, but I run into a bootloop.
Then I downloaded GravityBox (In the first post you have the explanations, in the second the .zip), and installed it after having made a backup with CWM. And… it works! So now I can nicely tweak Android, and first of all hide this ugly big “3G” symbol!

So far I am happy, with a new launcher and the Frost Icon pack.

Just two questions: after having made the backup with CWM, each time my FP1 reboots it says: System UIDs Inconsistent - UIDs on the system are inconsistent, you need to wipe your data partition or your device will be unstable. What does this mean? How can I turn that off?

And when I start Titanium Backup, it says that The SU-file is corrupted, and I should use SuperSU or Magisk. I looked this programs up, but what the hack shall I do with that??

Thanks to all FP1-Enthousiasts! Let’s keep it going! 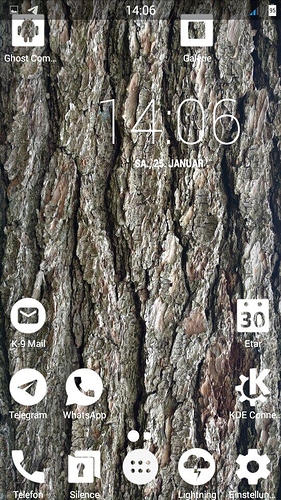 Does anyone have any ideas for my two issues described above?
Thanks!