Maybe we can make a list of apps that I can remove from our package? Which ones do you think are superfluous?

Is it possible to have a first package with just playstore? and then imagine that we can download everything else needed? just as pico or nano of openGapps?

Ok, I’ll send the output of adb bugreport along. After dumping the data I told my phone to reboot into recovery using adb reboot recovery. I saw a faint (because of the screen issue) boot animation and then the android droid with “Kein Befehl” under it. The whole time the screen was getting darker and darker.

[quote=“jftr, post:271, topic:19450”]
Before turning off your phone, make sure to have backed up any data that is important for you.
[/quote]That’s no problem, important data is mirrored across other devices.

If I’m not mistaken this is solved with gravity box…

Is it possible to have a first package with just playstore? and then imagine that we can download everything else needed? just as pico or nano of openGapps?

That’s certainly possible. I just wonder what’s most useful for most users … I believe most users expect to get at least some basic apps when installing GApps. I don’t know what the sweet spot is. I’ll think about it.

Easier to install apps we want than to get rid of apps we don’t!

There is a different xPosed module that provides the functionality, but I thought it would be better if the solution is native.

I posted the link above, but here it is again: Emoticons - Convert SMS to MMS at a price! (one post further down).

@jftr I have no idea, what the warning means, but you might want to look into this: 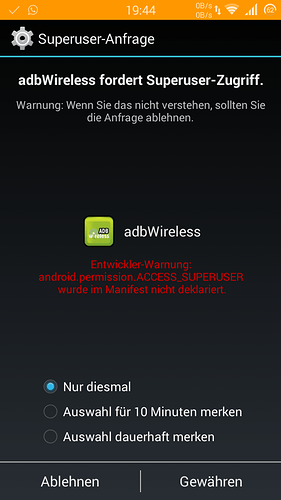 The red writing could look a bit off-putting to people…

This is normal behavior of Superuser. There might be a setting of Superuser (Settings > # Superuser > … menu > Settings).

Edit: It essentially means that the app tries to get root privileges without declaring so in its manifest.

Last time I read about it, ACCESS_SUPERUSER was deprecated. See also here:

According to the link you sent, it is deprecated in Android 5.0. It is still relevant on Android 4.2, so whichever app isn’t cooperating could probably still declare it on Android 4.2, but doesn’t (see a discussion about removing and reinstating the permission for example here). As for updating the superuser app: SuperSU, for example, completely ignores it, which would have the same effect as disabling the check which you’ve already figured out how to do. So essentially the bug is the pres…

Oh, so the warning is referring to the app’s manifest. Ok never mind then!

A post was merged into an existing topic: Battery level drops in FP1(U) alpha

@jftr just reporting back, had my device set aside (not booted up) for a while again and had no visible flickering until I’ve unlocked the simcard but then it started again and is getting worse but seams to take longer this time. I still hope it’s not the hardware as new Display looks hard to come by - and the fp2 is a bit to big for my taste.

While the preinstalled (gapps) version of “Google News & Weather” can’t connect to the servers (maybe too old version), updating to a newer version and starting it results in an error message, saying that my device isn’t compatible (but it was working on Android 4.2). Is there a way to fix this please?

I still hope it’s not the hardware

Unfortunately I could not find any cause for this. It really looks like it is a hardware issue. One thing that you could do to verify: Go back to the stable version 1.8.7 and see if that changes anything.

While the preinstalled (gapps) version of “Google News & Weather” can’t connect to the servers (maybe too old version), updating to a newer version and starting it results in an error message, saying that my device isn’t compatible (but it was working on Android 4.2). Is there a way to fix this please?

Thanks for reporting this. Apparently there is some incompatibility with the GApps package. I see whether we can fix that.

Can you please give some details:

I figure, you have GApps installed.
Do you have any non-standard configurations (XPosed, etc.)?

In general this sounds like some battery optimization setting is too aggressive. Did you enable anything along this line?

Edit: One standard way that could help solve this issue:

The complete update is FAR from being released, it’s not just some bluetooth problems, I installed the software-update, also gapps, did all updates and now, when I boot the phone it starts with:

and the worst of all: I try to go back using the instructions, but this results in : Error: System property does not match Installation aborted.