thanks very much, i’ve done what it says there, and now i get this: 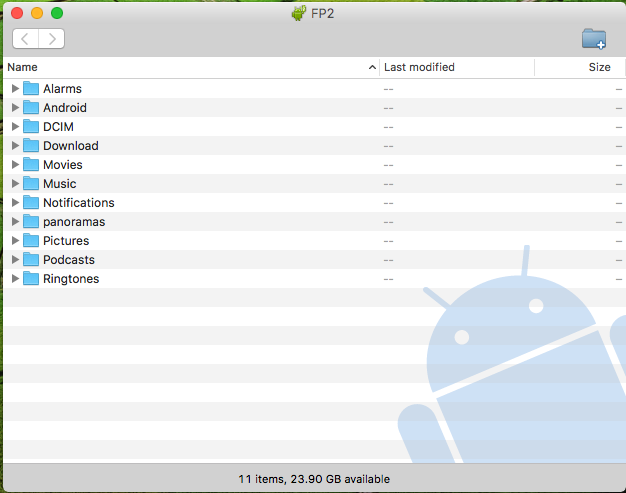 but don’t know what to do with it next. i need to transfer a csv file so that i can put it in my contacts, and i don’t want it in Google’s cloud, only on my phone. where should i drag it to, please?

i didn’t even know about the dragging of the notification bar, or even that that’s what it’s called. i’ve tried to find a tutorial for Fairphone, but all it does is tell me how to send texts and make phone calls. are there any more, that perhaps go into a bit more detail?

and i’d love to stop the vibrating every time i type a character, but i can’t find that in Settings either! but that’s quite minor!

You can send .vcf from Mac to Fairphone 2 via Bluetooth, go to Phone and tap three vertical dots at top right of screen > Import/Export > Import from .vcf file.

To disable haptic feedback, go to Settings > Sound & notification > scroll down to Other sounds > disable “Vibrate on touch”.

transfer a csv file so that i can put it in my contacts, and i don’t want it in Google’s cloud

I’m not sure how this currently works. (I’m still on a much older device). If I recall correctly, @werner_noebauer set up something like this a while ago (hopefully he’ll notice the mention and enlighten us).

Most of Fairphone OS is pure Android 6 (at the moment). I wouldn’t know which guide to recommend, but there should be plenty of general Android tutorials out there (though disappointingly, Google appears to have removed most of the help sections relating to Android 6).

i’d love to stop the vibrating every time i type a character, but i can’t find that in Settings either!

Apparently, it’s either under:

or the place mentioned in the post above. As said, I can’t check.

thanks. but i don’t have a .vcf file, i don’t even know what one is. what i have is a .csv file. also, i don’t have three little dots at the top of the screen, i have what is apparently called the notification bar.

that setting IS disabled, but it’s still happening.

and my battery, which was full a few hours ago, is now at 58%, and all i’ve done is take a few photos. like i said, i really want to be able to love this phone, but, it’s really not easy so far!

thanks. switched off the vibrate thing now, which is great.

started a tutorial for Android, as everything for Android 6 assumes you already know about Android, which is pretty rubbish. and the first thing it said was i need a Google account. but i don’t want one. i have no interest in Google’s cloud, any more than i did Apple’s! i just want to back my phone up to my computer, not have all my private information out there for anyone to see, i just don’t trust it.

but is it even possible to use an Android phone without a Google account? if i’d known that i’d have never bought the thing in the first place! help!

and i still can’t get my contacts onto my phone, something i would have thought/hoped would be fairly straight forward.

but is it even possible to use an Android phone without a Google account?

Absolutely.
Fairphone even provides you with its own fully supported Fairphone Open OS, which comes without the Google Mobile Services and thus without any Google Apps, so you don’t need a Google account.
Here’s a topic for you to investigate …

This is a #wiki. Feel free to contribute. To meta-discuss this wiki click here, if you need help following the wiki click here. :information_source: This guide assumes you have FP Open OS installed, compiled it yourself or got rid of Google Apps and Services on FP OS.
to see how to get rid of Google click here
###1. Install your first Apps For a general guide on how to install apps on FP Open OS click here. F-Droid. It is a store that provides free and open source applications. Apps are clean (no malware, spyware or ads) and you …

And perhaps you want to switch over to Open OS before importing contacts into an App which perhaps isn’t present on the Open variant.

And here is some more reading material …

thanks very much. unfortunately the first sentence got me:

“This guide assumes you have FP Open OS installed, compiled it yourself or got rid of Google Apps and Services on FP OS.”

I have no idea if it’s installed, I’m afraid, nor how to do it myself.

and i’m afraid i didn’t understand this either:

“And perhaps you want to switch over to Open OS before importing contacts into an App which perhaps isn’t present on the Open variant.”

if i haven’t got an app, how could i import contacts into it anyway?

I have no idea if it’s installed, I’m afraid, nor how to do it myself.

In general, if you encounter text looking blue like the FP Open OS bit in the wiki, these are links you can follow to get to know more.

With that in mind …

if i haven’t got an app, how could i import contacts into it anyway?

thanks very much. yes, i am aware of hypertext. and also, i am a native English speaker. but the link doesn’t tell me if i have it installed already, which is what i was querying.

i’m absolutely not having a go at anyone here, but i’m so p*ssed off at the Fairphone people for not making a device that’s easy to use out of the box if you want to do something as obviously nonstandard and horrendously complicated as getting the contacts off of your computer and onto your phone.

i am very disappointed with this phone. i had an iPhone before, and grew to hate Apple’s iOS through it. i already hate this thing at least as much.

so i got a Fairphone. but everything is so, so difficult. why?! i haven’t even been able to get the contacts on my phone at all, which is why i was here in the first place, but that discussion seems to have ended prematurely.

and the battery doesn’t last five minutes. and i haven’t got the phone number sorted out yet. it was supposed to take an hour to port over, but it hasn’t happened at all. so this phone is of absolutely no use to me at all apart from as a camera, but i can’t even do anything with the pictures once i’ve got them! and i’m having to live without a working phone, which i need. (i know that’s down to the Phone Coop, but still it’s part of the overall phone experience.)

had such high hopes for this phone, so sad it’s not what it claimed.

feeling really let down, and wishing i hadn’t bothered. i need my phone to work now, not in several weeks when i’ve read everything, and tried seventeen things that don’t work because there is no definitive answer, just people’s ideas, before having to reset the phone to factory settings and being in exactly the same position as i am now.

sorry this is all so negative, really wish i had something positive to say.

… and still really hoping that someone can turn my Fairphone experience round and make it positive.

Anyway, maybe you could try a client to sync mac to android phone. Something like SyncMate. I have no experience with that kind of software so I can’t provide any help (maybe someone here?). But it seems to be simple to use and close to your needs, isn’t it?

I used Macs in my old job regularly, we do have some iMacs in my new job and I could ask my colleages if I can try something.
What do you want to do exactly?

Personally I do not like Apple so much, in my opinion this stuff is only extremly expensive and overrated and since Snow Leopard (10.6) the OSX versions are getting more and more buggy…

Thanks for the reply - the question was more secondary to getting the interaction with the Mac to work: @colmosiris was looking at storing contacts outside of the Google cloud, and I recall you tried a couple of setups for that. Apologies if I’m mistaken on that account!

for saving contacts I mainy used “MyPhone Explorer” which is Windows based.
I will check if how I synced my contacts on Macs.

thanks very much, yes, i’ll give that a try.

i’m really glad you’ve had a good experience with it, hope i still can.

thanks. i’ve been using Macs for over thirty years, and i have a lot more problems with the last few OSes than i ever used to. i could write pages about it! but especially with the phone. apparently (as yet unverified) the latest update will kill the phone if you’ve had the screen replaced by a non-authorised person. this may be why my iPhone is now dead.

and they slow down old iPhones “to save the battery”, so why does the phone always go back to full power mode after charging, when i always select low power mode? this is Apple wanting me to buy a new battery! or preferably a new phone!

so what i actually want to do is firstly, use the phone without a Google account (which i’ve been shown documentation about), as i didn’t even know i “needed” one, and then to load my contacts and calendar (haven’t even thought about the calendar yet!) onto it from my computer. i hope that isn’t asking too much!

also, i’d like to be able to synchronise the phone and the computer, if that’s possible, once it’s all set up?

My apologies for confusing you further as had assumed that you knew about Fairphone Open OS when mentioning wanting to avoid “Google”; the instructions that I gave appertain to Fairphone Open OS not standard one. It is Mac OS which introduces further issue as would need to purchase software to convert .csv to .vcf format such as https://www.systoolsgroup.com/csv-to-vcard-for-mac/how-it-works.html
When there is advice to calibrate new battery and configure proximity sensor just when you want to start using device it can seem daunting.

thanks, and no worries! this is a bit like being let loose in an ocean in a tin bath

i can create vcards out of Apple’s Contacts app, but AFAIK, only one card at a time. i will investigate.

advice about calibrating the new battery and configuring the proximity sensor (didn’t even know there was one!)? i’ve not seen it. there’s nothing about it in the User Guide.

re avoiding Google, i don’t want a Google account, and i want my contacts and calendar to be only on my phone, not in the cloud. (and on my computer, if possible, but i’m not assuming anything any more!)

With regards calibrating proximity sensor tool can be found in the settings. Scroll down to the very bottom and select “Maintainance”. Then choose “Proximity sensor”.
Battery first charge, see here: https://support.fairphone.com/hc/en-us/articles/207891033-How-can-I-charge-my-Fairphone-2-
If device discharging quickly see here: https://forum.fairphone.com/t/pencil2-a-little-guide-to-fairphones-batteries-fp1-fp2/5618
Extending battery life: https://support.fairphone.com/hc/en-us/articles/115001847943-Extend-the-battery-life-of-your-Fairphone
You could look at ContactSync: http://ntbab.dyndns.org/apache2-default/seite/contactsync.html and CalendarSync:http://ntbab.dyndns.org/apache2-default/seite/icalparseandroid.html which can be used independently of Google.