I had my Fairphone 2 for so many years now, so the recent announcement that software support would stop in March was saddening. I am afraid I am not technical versed enough to venture over to Lineage 0S as suggested, the only way to keep using it thereafter safely…

Thus with a heavy heart, since I recently replaced camera and battery, I wondered what the community advise is:

I had my laptop for close to 10 years before swapping it out. So I am hoping to do another “cost-per-wear/use” investment into a smartphone for longer again.

Thanks for any pointers and experiences with either. Particularly I’d appreciate a prediction from Fairphone itself. 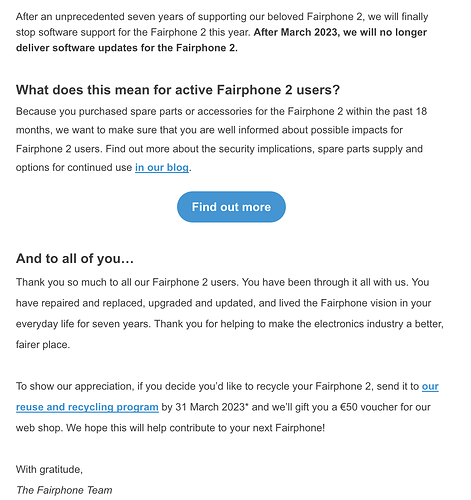 The Fairphone 3+ is our sustainable allrounder. Made with care for people and the planet, with all the perks of a modern smartphone - and so much more. How about a replaceable battery, or a trusty 3.5mm headphone jack? The Fairphone 3+ does it all....

You might still be able to find it at third party dealers or used though.

I am afraid I am not technical versed enough to venture over to Lineage 0S as suggested, the only way to keep using it thereafter safely…

If you happen to have #fairphoneangels in the vicinity (<- see #angelsmap), you could ask them whether they might be able to help get you up and running with LineageOS or /e/OS.

before I left to Germany/Austria/Switzerland

If in Germany by chance, you could also look for something like this …

And I bet initiatives to help install alternative Android OSes are active in other countries, too.

So I am hoping to do another “cost-per-wear/use” investment into a smartphone for longer again.

My philosophy is the same: Buy something that I can keep for very long. To do this this needs to be up to date at the time of buying it so that after some time it is still decent. That makes the FP3 the wrong candidate unfortunately. The FP4 is on the market for somewhat more than a year. That’s still okay in terms of up-to-dateness, however I personally speculate on a FP5 late this year or early next year which hopefully will be a good successor for the good old FP2.
Until then there are two options: Either switch to an alternative OS (have someone help you to do that, but for instance with the Lineage OS manual it was pretty straight forward) or be aware that your phone might have some smaller or even bigger security issues and continue using it. I don’t say this is perfectly safe, however when looking at non-Fairphones there are so many people who use their phones with extremely outdated software without any issues. I know this is not great and some of the forum’s security experts will not applaud to this recommendation but then we should have left the FP2 already when Qcom didn’t provide updates for the SoC anymore. When Fairphone switched Android versions there used to be a longer break between updates already and I doubt that many people didn’t use the phone for security reasons at that time. A FP2 on its last update will probably still be a safer phone than a Sony Xperia XZ 1 Compact (example taken from my family) which was released later, can still be a daily driver but is stuck on Android 8 with the last update years ago already.
If you plan to squeeze as much lifetime out of your FP2 as possible I’d go for an alternative OS. If it is only to bridge the gap towards the next phone I’d take the risk to stay on the stock OS for a few months.

Thank you for asking this - I find myself in a similar situation - and the three very interesting answers. I fear that unless the FP5 is a usefully smaller size I will not be a Fairphone user again. Reading the responses the temptation to just keep on using the old thing and not worry is almost overwhelming.

Thanks indeed, gives me food for thought

Is there anyone from Fairphone itself on this forum who could shed more light on the plans for any upcoming FP5?

It would really help to know more so I can find solutions inbetween if needed.
Thanks indeed!

No, not on a regular basis, it’s jut a user forum only hosted by Fairphone. And even if there would be someone, in the past there was never a premature announcement of a new phone or an estimated time schedule.

That’s not true. For the FP1 and the FP2, there were infos about the phones and their development status months in advance. Only with the FP3 they switched to the “Apple secret” strategy, which imo was a very bad move.

That was, when the crowd funding phase started, and the phone could be ordered. No schedule that in 12 months from now the release of a new phone will be presented.

Sorry, but two months isn’t premature. I don’t expect a FP5 in March ;).

Only with the FP3 they switched to the “Apple secret” strategy, which imo was a very bad move.

People always want to have the latest and greatest sh*t. So if they know something is coming in x months this will most probably cannibalize the sales figures of the current product. That doesn’t mean that we have to like this - I’d be interested in how far I definitely want to stretch the lifetime of my FP2, too. But in the end, FP is a business and needs to make such considerations.

So if they know something is coming in x months

This will lead people who are interested in a Fairphone who don’t care about the latest model just buying it anyway while thos who do prefer to buy the newest generation to keep their current phones for a little longer to wait for the new model.
On the contrary, if they don’t announce it, some people who want the newest model will feel frustrated that it was just around the corner when they bought the older one, which might lead them to upgrade sooner.

Not announcing the launch in advance is pushing people into throwing away their current phones earlier than necessary, which is completely against FP’s mission. I don’t understand why they seem to not care about this at all.

On the contrary, if they don’t announce it, some people who want the newest model will feel frustrated that it was just around the corner when they bought the older one, which might lead them to upgrade sooner.

One can find arguments for both directions: One thing is for sure: If I buy a FP right after its release it is very unlikely that the next day a new phone will be released. If I buy a FP4 let’s say in October 2023 I was either in a need for a new device (and then I couldn’t have waited for a new release) or just impatient.

thos who do prefer to buy the newest generation to keep their current phones for a little longer to wait for the new model.

As stated above: If you don’t need a new phone right now you can (and should) do exactly this with or without announcement, that doesn’t make any difference. An announcement might just feed one’s impatience a little bit. If your old phone dies while waiting for a new one to be released it’s a completely different story. Then it depends on how much you depend on having a phone if a release date being announced let’s say a half year in advance makes it easier or not. Last but not least such announcements put the pressure of expectations onto the FP team which is completely against FP’s mission. I understand why they seem to care about this all.

Not announcing the launch in advance is pushing people into throwing away their current phones earlier than necessary,

Really I don’t get that, but then clearly I’m not people and the people I know are also not people according to that statement.

No one is pushing anyone to buy, exchange or to throw away a phone

Hey both, thanks for both your comments. I didnt mean to stir a heated debate.

I am actually coming from a whole differrent perspective. I don’t care to have the latest shit, if I wanted to, I wouldnt have hold onto my FP2 for so long, and my laptop for 10 years. All the while people asking me why i would keep a phone that doesnt properly charge at times, discharges without warning and takes comparatively worse pictures. I had my friend call it a plastic brick, but I dont mind. I was ok to live with this inconvenience and continue too.

Now that I realise how difficult it is to keep up FP2 / Android running for users like me, who have great respect for alternative OS that they dont feel comfortable of using given the lack of knowledge around it – makes you feel as uncomfortable as continuining with a security-risky FP2 from March. My question is not about the latest shit or FP business model.

I want to make a choice, that I buy the model that will last me the longest in terms of replacement accessories (FP premise) and software updates. So as someone said above, it would make sense to try and get the very last model (ideally). If I can use a dumb phone inbetween for calls/texts, I am happy to do that. Obviously, waiting 12 months is not a way to bridge this.

I think there is no golden solution for this here… but since FP is not apple/smartphone, and their business model is to create a “fairer” phone then they could at least support android until they give us customers the latest model to exchange it too… now i feel dumbfonded having to find solutions like that and bother you guys here to make a good choice.

Well they already released two successors to the FP2, that are still supported with software updates.

but since FP is not apple/smartphone, and their business model is to create a “fairer” phone then they could at least support android until they give us customers the latest model to exchange it too

The Fairphone 2 was the only phone with the Qualcomm Snapdragon 801 chipset to get an official, Google certified Android 7 back then, thanks to stubborn commitment by Fairphone. Other phone vendors just waved good-bye to supporting their 801 devices after Qualcomm didn’t continue supporting it on Android 7. There’s a reason the vendor patch level in the Settings is reported as April 2018, as opposed to the recent security patch level.

The Fairphone 2 is now on an official, Google certified Android 10. Fairphone really already went to improbable lengths here, disregarding industry standard practice for such “old” devices.
Google will stop releasing security patches for Android 10 very soon, if previous Android versions are any indication.
Developers can try to backport the patches for newer Android versions to older Android versions not officially supported anymore, but I guess over time it becomes increasingly unfeasible. Which might have played a role in the decision.

The odds to work against grew ever more unfavourable over the years. Official support had to end somewhen. So it does, sadly.

Just my take on it, of course.