Just saw that the “Fairphone” selection in the user profile is currently missing the Fairphone 3 and any combination of it with Fairphones 1(U) and 2.

(As well as perhaps “I have a Fairphone, but don’t know or care which one.”.) 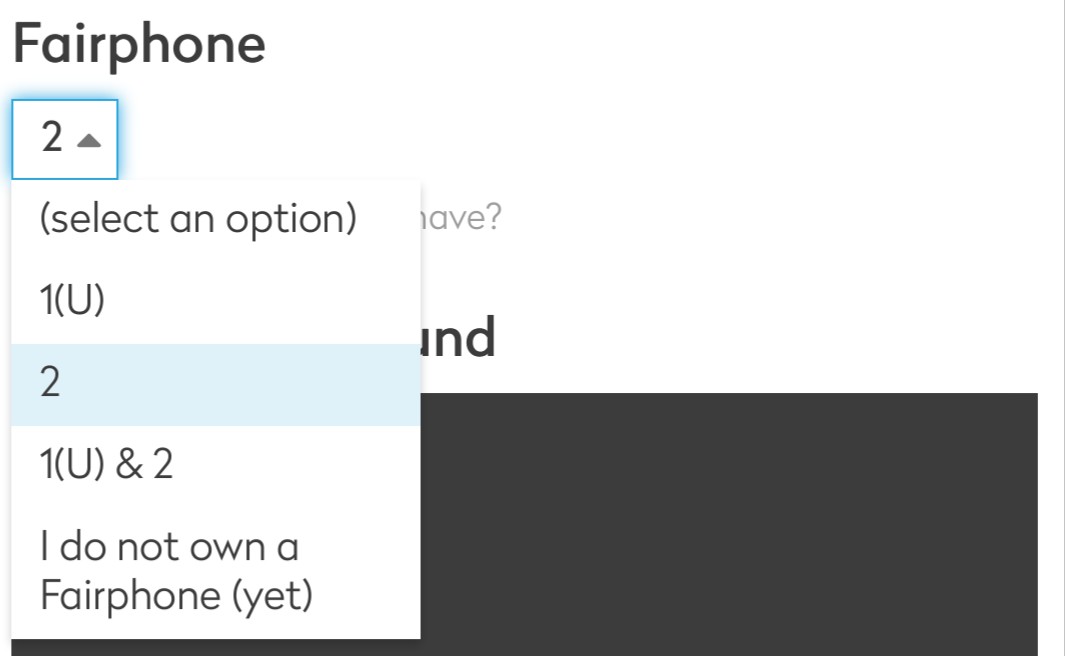 I think we could also consider to just drop the U from “1(U)”. By now, the frequency of FP1 users needing a storage upgrade seems to near the number 1 per year in my experience

Thanks for reporting. This is a known issue.

I’d rather say, it’s no issue at all. Why not just leave it the way it is.
From my point of view, the FP1(U) still is correct.
The FP1 here is still no (U), as it works just fine and I never got round to making a backup and changing the storage configuration.

It’s rather support @AnotherElk , that FP3 is missing (as posted in another thread as well already) and that it maybe should be decided what options o present, as there are now 6 possibilities. I have no idea, if all should be offered to chose from:

My 2 cents: I think all 6 posibilitites should be selectable (by the time an FP4 comes out we could think of removing the FP1 to stay at 6 choices). And I’m slightly in favor or removing the “(U)”. I think it doesn’t really add valuable information and is likely to confuse new people coming in who started with an FP3 and are not familiar with/interested in the early history of Fairphone.

I have a Fairphone 3 now and there is still no menu entry for it. If the list does not get toooooooo long, you should keep every model that has been released.

It is still a known issue.

Fairphone 3 is now an option in the profile.

Fairphone 3 is now an option in the profile

Ok, but why are there no combinations with other Fairphones?

Probably because this topic was closed before a consensus was found about the combination options.

Why not just doing checkboxes for each FP?
Don’t know if possible or needs a lot of work though.

Don’t know if possible or needs a lot of work though.

I can imagine the forum software can more easily display the one choice out of a drop-down menu, but I have no insight here.

Anyway, I don’t see any logic in how the choice of Fairphones is set up now, even without a consensus here. There’s a choice of 1(U) & 2 already, so why not have all 7 possible combinations? Who would complain?

I set this back to “(select an option)” for me now, at least that’s still possible.