After many months of waiting I recently received my Fairphone 2. Now the ownership message that is displayed on the lock-screen shows that the device is apparently in use for more than 5 months. How is this possible? Did I receive a second hand phone when I payed for a new one?

The ownership widget shows the time since the production date of the main board (Interactive Clock).

It’s possible that the main board of your FP2 was indeed produced in Dec. 2016, but other components hadn’t been produced then, causing the delay.

My Ownership shows today 2 months and one day… I got my phone on January, 30. So the mainboard was produced, when I had the phone?
(written on April, 15.)

I am so glad I can finally join the Fairphone community !
For the record, I tried a research but couldn’t find any answer so here is my story. And forgive me if the answer is out there. <3

I bought a second hand Fairphone 2 yesterday. I am very (very very) happy about it and didn’t face any issue (despite 1 or 2 random reboot

). The previous owner told me she received the phone in january (she was an early buyer with an august invoice) and in fact the phone does not even show any of the blue marks on the inside (it’s just written “one of the first” and a number). So I do believe her.
But, the screen showing the ownership shows “5 months 2 weeks 6 days”. First of all I thought it was weird, since we’re not in june, but hey, who really cares.

And then I wandered if there is any way to reset this info ? Does anyone know if we can reset it ?
Of course, I already made a hard reset of the phone. But since it is supposed to come from the motherboard, it didn’t change anything.

Again it does not really bother me, I can live with that. But if there is a way, I’ll be a little bit more pleased

Anyhow, wish you all a very nice day,

Afaik there’s currently no option to manually reset this. According to the following thread the phone was reset after an update to OS version 1.2.8:

Hi Keith, I guess (in this post) with OS version 1.2.8 the start date for the counter was reset (from originally 01.01.1970) to some day in October 2015, probably the date of production start. You might get the (almost) correct ownership date by entering a SIM card (so the phone can connect to a network and get the current date) and then doing a hard reset - if you think it’s worth the effort.

You might try a hard reset with a SIM card inserted, then the phone should get the correct date and time (from the mobile network) and hopefully reset the ownership timer.
Lauralina April 17, 2016, 2:10pm #6

Thank you for the comment, might want to try that then ! I’ll let you know if I go this way.

(and thank you for moving my post, sorry about the inconvenience)

Hello, for some reason my fairphone seems to think I’ve had it for over 6 months, it has only been around a week. Any ideas on how to reset the counter on the lock screen widget? 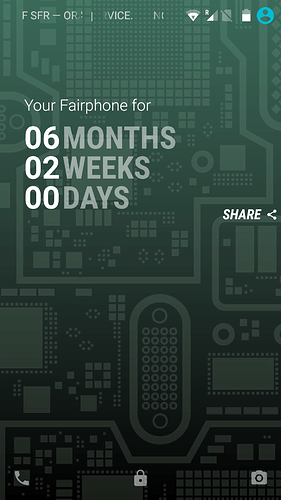 That’s a new trick of the industry: you lost your warranty already …

My phone has the same problem…
I think it would be nice if there was someone from Fairphone who addressed the problem!
I think it is a really nice feature but it fades if it does not work properly!

the age of my Fairphone is not true, it is yet to be 6 months old? and it is only 2 weeks old. would jolt set the factory settings help? or how can I fix it? 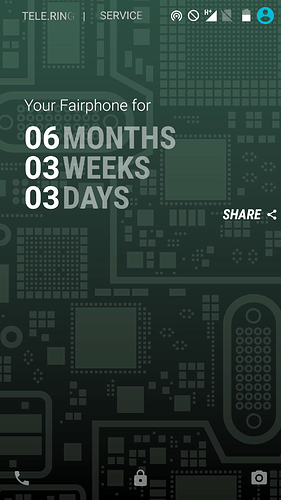 Same here. Not a big issue but a bit of a nuisance since it can’t be reset. Can I opt for a lockscreen without it I wonder?

Has anyone here bothered to read my post above?

The ownership widget shows the time since the production date of the main board (Interactive Clock). It’s possible that the main board of your FP2 was indeed produced in Dec. 2016, but other components hadn’t been produced then, causing the delay.