Fairphone Open 17.02.0 has been released. You can get it through the updater, or by downloading in the download section code.fairphone.com.

If your updating a modified Open OS (OpenGAPPS, Xposed, …) make sure you follow the forum’s update guide to avoid bootloops.

Installed without problems over 16.12.

As far as I can see at the moment the proximity sensor wakelock (battery drain) is still there.

Thanks for this update and for the bug fixes

The following bug is still not solved: Display brightness takes up to 7 seconds to adjust to a readable level outside. Problem seems to be the same on 1.12.0. And I don’t see this problem mentioned within the Fairphone 2 software issue report.

No problems with the update.

17.02 installed over 17.01 without any problem. I’m just wondering, does the updater app work for open OS. I’m just using it to check the firmware after sn update. But it allways recoments to “upgrade” to Fairphone Open 16.11. 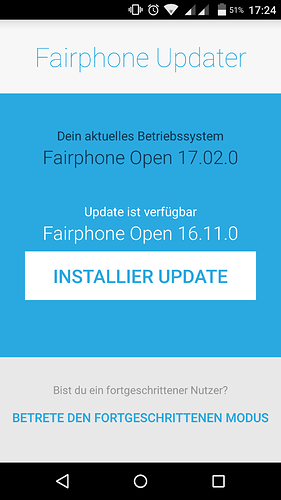 My fault. I deleted all data in “Fairphone Updater” now it works. I should have done this before asking you ;-]. Anyway question solved.

Yaaay it worked within the first trial!

However, some personal settings were lost, like the Apps that have been idle for some time and the favourites panel (the apps you get when sliding from the right). Where is this info stored?

I had no problem to upgrade via TWRP. No Xposed or GSuite installed.

at first some facts:

Now the correct/new build number of the installed version is shown (17.01.) under “About phone” menu.
The phone encryption is somehow gone. I absolutly have no idea how this works but currently I will not be aked to type in the encrytion code after turning my phone on and off.

How can I ensure that everything is fine now? I read some threads about that TWRP port for the FP2 is not working with encrypted phone but what would be the best way to proceed and go on installing 17.02.0 now?

Thanks for any advise.

If your device is modified (you flashed anything e.g. Xposed and/or encrypted) the updater usually doesn’t work. Instead you have to download the .zip and install it via TWRP (not via the updater) and re-flash all modifications in TWRP in one go before rebooting.

A more detailed description can be found in the #updateguide for modified Open OS.

Thanks. This seems to be the way I have to go ✏ Update Guide for a modified FP Open OS (with Gapps, Xposed and more)
(including installing TWRP Community Port in advance because of the encryption)

I will let you know if everything went fine.

Currently my phone is hanging when I try to boot into TWRP (but I’m still able to boot into the OS). I hope I will be able to somehow start or install the community port of a newer TWRP release using adb/fastboot.

Installed the update via the updater, during following reboot rebooted into TWRP and installed GApps and XPosed. Worked fine with unencrypted FP2.

Perfectly up and running, 17.02 with Xposed, I flashed the zip and in the same session within TWRP also xposed v87, rebooted and it works seamlessly

Update went smooth - thanks a lot!

I updated from 16.12 with encrypted data and XPosed, but only flashed XPosed after the update (i.e. within an extra TWRP session). However, I haven’t experienced any bootloop (as I expected from other’s reports with similar setups concerning 17.01)!