I have very similar questions as in this thread: Is it possible to solder the internal microphones away?

However I would like to physically remove / deactivate both microphones from the Fairphone 3, not 2. I also wanted to know, whether I would really need a heat gun / soldering iron.

This teardown seems to have the most detailed pictures regarding the inside of the phone: Fairphone 3 Teardown - iFixit

The top and bottom modules contain each one microphone. From the pictures alone, I cannot tell which components exactly are the microphones and how they are fixated. But I really am no expert, hence why I would prefer a solution without soldering iron etc. I do not care, whether the microphones survive the procedure

I am aware that there are the Pinephone and the Librephone with dedicated hardware switches, but from what I have read those are aimed at early adopters.

I wonder why you want to remove them? If you don’t care about damage maybe you could just damage them so they don’t work?

You may just be able to push a small piece of wood in the mic holes ??

But I really am no expert

How much are you not an expert? I think I won’t teach you this can be really dangerous.
I believe in any case you will need heat. I can’t tell you how to solder them away, I never managed (I tried once on my FP2).

What I can tell you from the picture of the top module is that the microphone is located here: 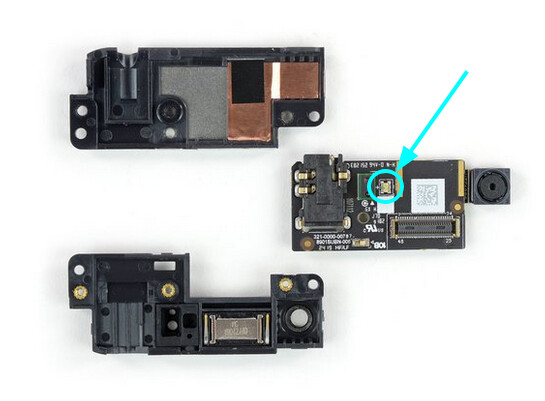 I don’t know for the bottom module. It should have a similar shape though.

I believe in any case you will need heat.

Since the integrity of the mic is unimportant.
Perhaps a sharp wire cutter/nipper might do the job as well?
Something like this (also available in an ESD version).
Don’t be irritated; the page the link leads to is an english version.

Thank you all very much for the fast responses.

As probably for the creator of the linked old thread the reason for me is a more “guaranteed” privacy. For phone calls I would simply connect an external microphone.

Well, I am no handyman and normally do not do any stuff like this. If the only solution is via soldering iron or something similar, I probably won’t do it, despite the availability of videos of how to do this for other smartphones.

Actually yes, I would prefer an easy method like snipping the microphone off. Do any of you have an educated guess whether this would completely break the smartphone or work as intended?

Not a problem, I also speak German

An option may be to get another top module with the older camera and test out disabaling.

Fairphone 3 top module and camera module to give away Giveaway

What product(s) are you giving away? Fairphhone 3 camera module and top modules (Once you have given away your product, please add [GIVEN AWAY] in front of the topic name or ask one of the #communitymoderators to do it for you) From where would you be shipping (country or city)? London - happy for someone to collect from SE15 Photo(s) of the product(s) (if it is a phone, please include a photo of the phone switched on displaying the current date): Other, remarks: NB: If you are interested…

For phone calls I would simply connect an external microphone.

I think Alex has correctly marked the position of the primary microphone. However, it is not clear if the microphone has already been removed from its position in the photo (looks a bit too flat for a microphone). iFixit’s teardown (step 8) photo might provide more clues (also on the bottom module).

I have marked all spots RED that seem relevant to me here (double-click for detail view): 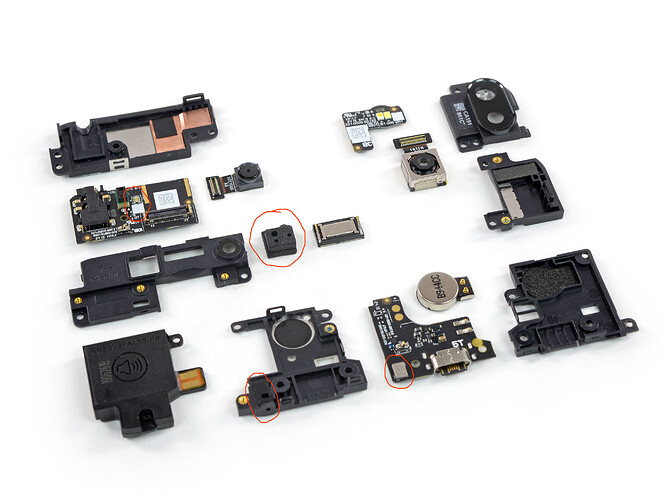 nDtPWTJIm5JAanI63918×2939 929 KB
Just my guess: The primary microphone might be sitting in the little square-sized black housing in my biggest red circle. The secondary microphone (on the bottom module) might be the little “silver box” in my most right-hand red circle – looks harder to remove without damage.

Before no one mentions it: To open the top and bottom module, you will need a Torx T5 screwdriver and probably something (“opening pick”) to pry open the module once the Torx screws are out. Opening the modules themselves is not covered by Fairphone’s warranty.

It was the microphone if the top module I was indicating.

However, it is not clear if the microphone has already been removed from its position in the photo (looks a bit too flat for a microphone).

I don’t think they would have removed the microphone, iFixit teardowns rarely solder away components.
Also, it doesn’t seem too flat, the microphones on the FP2 are about the same size.

Just my guess: The primary microphone might be sitting in the little square-sized black housing in my biggest red circle. The secondary microphone (on the bottom module) might be the little “silver box” in my most right-hand red circle – looks harder to remove without damage.

No, I doesn’t seem to me. I would tend to say the primary microphone is the silver flat little box on the right and the secondary the golden box, as indicated on this image: 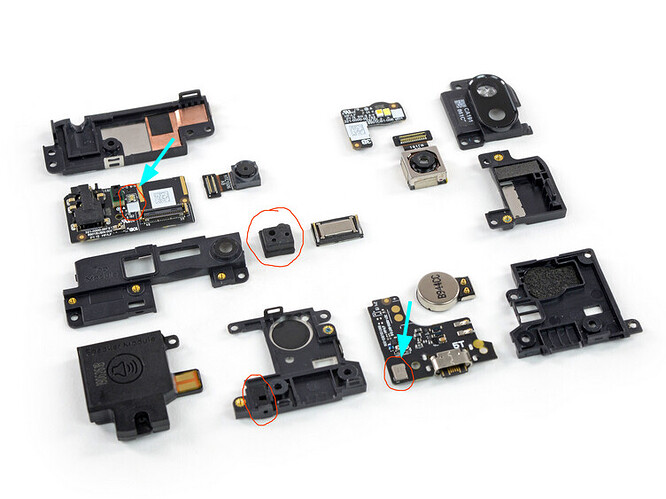 I also looked at the position of the little holes outside of the modules and the little black protective cases located here in the top module:

and here in the bottom module: 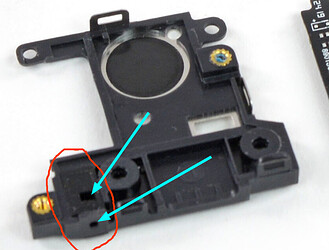 If you check the shape of each module casing, this is how it fits the best.

I’m keeping that mistake in my text though to avoid too much need of change in your (Alex) reply etc.

Again thanks for the input.

Luckily ifixit lists the tools they used for the teardown and from what I gather the Mako driver kit is not even necessary.

I guess the best starting point is then to try to find the two modules in the giveaway section and order an appriopriate ESD nipper / pincers.

Sadly don’t have time for it right now, maybe late in the evening.

Yes open for six months unless you ask to close it. Have fun

Luckily ifixit lists the tools they used for the teardown

Yes, but they don’t solder away the microphones, so…

Yes, but it can be reopened on demand, you just have to ask

You can always use a Bluetooth headset to provide this functionality.

I disassembled the Fairphone 3, which was staggeringly easy even down to the bare circuitry of the top and bottom modules (except for a handful stubborn Phillips screws). I have not done anything further yet, because I was a bit surprised when inspecting the bare top module with the secondary microphone. If one flips the bare top module, one can see a silver box which looks a lot like the one on the bottom module. The silver box on the top module is “pretty much exactly” positioned on the other side of the golden chip, which Alex.A marked as secondary microphone.

What do you think:
• Are both these components part of the secondary microphone?
• Only one of them? And which one then? ^^

I assembled the FP3 again and await your feedback

By the way: I intend to test the microphones after the “operation” with the integrated check up tool in the developer options, which I found via this thread:

CHECKUP diagnosis on the FP3 – and its future FP3

For the sake of completeness the FP3 comes with a service test tool preinstalled. The tool can be helpful to track down all sorts of hardware problems. Seems to have a similiar purpose as the Fairphone “Checkup tool”: This suggestion is implemented

For me the mic tests so far had no feedback, probably because it is improved as was suggested in that very thread.

Are both these components part of the secondary microphone?

Probably, yes, if the two silver boxes are very similar

Update: The “operation” seems to have been successful. Both microphone checks via the integrated check up tool failed (as intended ^^). Only a single slight “pop” sound is played back at the beginning and nothing else. I opted for both silver boxes, which actually were covers, as you can see on these pictures. I was not able to put the covers back on. 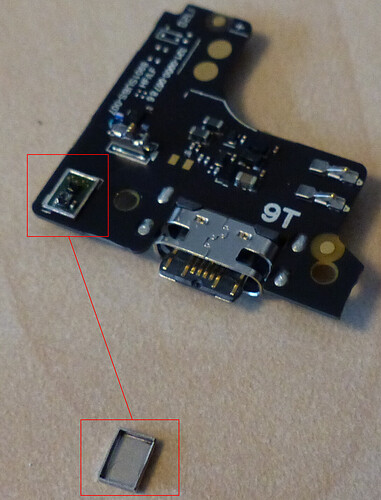 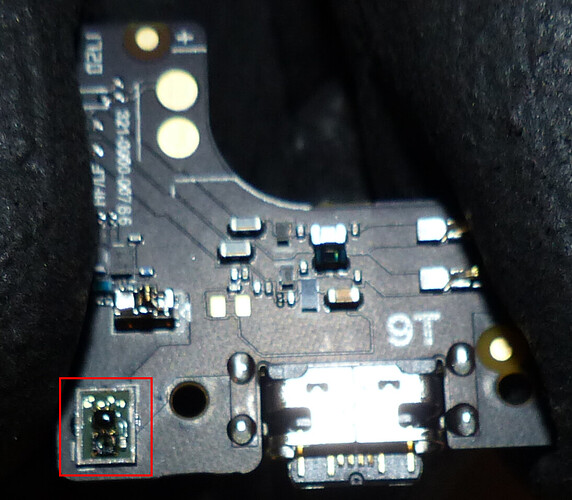 I simply cut off the most protruding elements and then scratched off less prominent features, until I no longer dared for fear of damage to the whole board. I do not think it would have been possible to cut off the whole component without major risk of damage to the rest of the board. I was wearing protective gear and was inside a well ventilated space.

I am using the phone now for two weeks, mainly with a Bluetooth headset. When called, I simply take out my headset, activate it (/connect it if using the wired headset) and it automatically connects. Of course this takes a few seconds but I find it acceptable.

Thanks again for all the input.

Off topic question: There is not a thread like for the FP2 yet which lists compatible headsets, correct? (✏ List of compatible Headphones and Headsets for FP2) If not, I could start one in a form that not a single “maintainer” is needed, e. g.:

Confirmed to be compatible:

Confirmed to be partially compatible:

Confirmed to be incompatible:

Everyone could simply copy the list in the latest entry and add their own product in the alphabetically sorted list as a new post. Disadvantages would be the length of the thread, that one would always have to skip to the end for the newest list and of course human error / malice

But there would be no need for a single person to do all the work. Do you think this is feasible and reasonable?

If not, I could start one in a form that not a single “maintainer” is needed, e. g.

AFAIK there is indeed none, so please feel free to create it, and then tell me or another moderator when it’s done so that I/they can make it a wiki.

Opening the modules themselves is not covered by Fairphone’s warranty.