Fairphone 3 loses charge while plugged in

Hey, I have a problem charging my Fairphone 3. Though connected and indicating it’s charging, it actually loses power. Yesterday evening I plugged in at ~30%, today I woke up to ~20%.

I have tried restarting the phone, and switched cable and power supply - to no avail.
Battery manager doesn’t show any apps misbehaving.

I have 17% left, approaching death of the phone although plugged in

Any ideas what I could do?

My best guess is that it’s either the cable or the charger. Have you tried a known good one? Else it could just be the same problem with both you tried. The FP3 seems to be a bit picky regarding chargers, unfortunately.
Does the phone say anything about charging speed when plugged in? Slow or fast?

I have tried restarting the phone, and switched cable and power supply - to no avail.
Battery manager doesn’t show any apps misbehaving.

I have 17% left, approaching death of the phone although plugged in

Cleary put the phone in Aeroplane mode so it doesn’t run the battery down whilst a solution is sought. Ensure NFC etc, are OFF

Can you try and charge the battery elsewhere, as it is problematic charging a really dead battery.

The next thing, is to put the battery in safe mode to ensure there are no background custom apps drawing power.

Then plug in a cable to a computer’s USB A port. On a modern computer that has USB 3 protocol it will provide 900mA enough to charge the battery in four hours.

Check at regular intervals to measure the discharge, 10m, 20m, 30m to see if you still have the problem.

I note you have an FP3 not an FP3+ so do you have a valid warranty, if so please contact support officially.

Try and find either another person or a #fairphoneangel who can help elimate in the following order, the battery, charging gear, bottom module.

You may also like to buy a bottom module as at only €20 it a cheap option to eliminate it.

I have been using cables, that have worked perfectly before with the Fairphone. It would be a great coincidence if they both started to malfunction at the same time.

I use one charger with fast charging and one with slow charging. (Doing that on purpose though, in order to preserve the battery. And slow charging was enough up until it started to behave like today)

Thanks for the thorough reply. I have tried safe mode already, it had no effect.
The battery status check looks good.

“Unfortunately”, the problem dissappeared again now, so the battery is nearly fully charged. Without any changes on my side. I will monitor this further and come back if I get anything interesting out of it.

Unfortunately, I’,m out of warranty already.

Then the next logical place to check is the bottom module containing the USB-C port. Have you already tried turning the cable connector 180 degrees? Sometimes it works better one way than the other.
If you have the chance it would be a good idea to swap bottom modules with someone who does not have that problem to pin down the faulty component. Maybe there is a Fairphone Angel nearby? Have a look at https://map.fairphone.community/ for that.

If the phone’s been used intensively the battery might be on the way out. Though I note that you very properly prefer slow charging.

By intensively I mean charging to 100% at least once a day.

Make sure that the USB port is clean (carefully)

If the phone’s been used intensively the battery might be on the way out.

I think this is unlikely as the diagnostics don’t seem to complain and the phone does not seem to show any other error message about it either. From my experience symptoms of a broken battery look differently.

Make sure that the USB port is clean (carefully)

Certainly one more thing to check before replacing any parts. But USB ports wear out and there might be a contact problem that can only be fixed with a new part.

My Fairphone 3 (FP3) has also recently, suddenly, and unexpectedly developed a similar-ish problem. It seems to have occurred in five phases:

Phase I: The phone was purchased shortly after FP3 was released, and so is quite old; the battery is the original. It has been “intensively used” (charged daily(-ish)) all these years, so I presume the battery is nearing EoL (End-of-Life); indeed, a fully-charged battery does not seem to last as long now as it did originally, albeit I also use the phone much more nowadays (mostly due to the pandemic).

Phase II: Several weeks ago ago — before the upgrade to Android 11 — the battery began draining fairly rapidly, barely lasting “a day”. In addition, whilst previously the phone would auto-shutdown at c.1% remaining charge, it began shutting down at c.20% remaining charge.

Phase III: Shutdowns now happen at c.80%(!) remaining charge. However, if connected to an external power source (battery pack or A/C mains), worked fine. Obviously not correct, so disassembled the phone, checked for dirt, etc., found nothing, reassembled, and the phone seemed to start working “normally” (see Phase I, above). (This was the first disassembly since installing the FP3+ Camera modules at about the start of the pandemic; i.e., in about three years.)

Phase IV, “Catastrophic failure”: Again, shutdowns at c.80%, but this time an external power source was not a work-around, the phone was oscillating every few seconds between charging and discharging! Disassembled the phone again, and almost found nothing — no dirty contacts, etc. But I did notice the phone came apart much more easily than it should have, suggesting it was not firmly reassembled during Phase IV; this time, pressed everything back together again very tightly.

Phase V (current situation): Seems to be ”Ok” (i.e., back to Phase I), albeit insufficient time, etc., has passed to conclude this definitely.

Conclusion? Puzzled. My current best guess is the battery is ageing (“failing”) and then became “loose” (poor contacts).

Other than obtaining a new (replacement) battery, any suggestions?

Thanks for any constructive advice!

Thanks for the details!

- Glad you managed to get things more or less back to normal, that’s great! Good internal contacts are essential of course and I agree with your analysis.
So, I think you’d be right to get a new battery. Here’s my thinking:

Have you checked the battery status?

Maybe you can calibrate/kickstart the battery

Yes, nothing obviously abnormal to report.

Interesting idea! I will give that a try this evening.

In a sense, I did try a “battery kickstart” during Phase IV, when I left the battery out of the disassembled phone for maybe 30 minutes. That was to let it cool down despite it not being hot or very warm. No specific procedure was followed, and the charge after reassembly and reboot was the same as when shutdown (manually, due to the weird “oscillating” behaviour).

Thanks for the heads-up on battery care!

I (now) have no recollection a not-100% but 20–80% “rule”, albeit searching (now) does find such suggestions. Normally, the phone is recharged each evening, either by a generic recharger or via my laptop, so the percentage at-time-of-recharging is rather variable. Sometimes (Phase I) is has dropped to so low it auto-shutdowns, but that is rare.

I do have an external powerpack, and in fact it’s currently about the only way to keep the phone running for any period of time (especially when in-use) — sadly, it is now back to Phase III behaviour, tending to shutdown at 80%.

Actually ordering a new battery is going to be awkward for unrelated (not financial) reasons… Murphy’s Law and all that!

Yes, nothing obviously abnormal to report.

So it reads as [GOOD]

Can you find someone, maybe a #fairphoneangel nearby that can swap batteries ?

Yes, the battery test (as well as the Device Info HW app) both consistently say “Good”.

I tried the “Battery Kickstart” first method (twice), then the second method. In all three attempts, it seemed to make things worse, it began shutting down at over 90%, and would sometimes barely boot! (It would boot, but soon after entering my unlocking PIN, would auto-shutdown.) Later, after a considerable amount of time on the external powerpack, it settled down back into Phase III-like behaviour (shutdown at 60–80%), which is the current situation.

One thing I did notice is the back seems to be a bit warped. There is tiny gap between the main (top) and back cases underneath the power button (not the battery side). I use the protective “rubber” bumper, and as far as I can tell, no dirt or moisture has ever(?) entered the case. My phone is in one of Anna Treurniet’s beautiful cases, which not only protects it rather well, also makes it hard to tell how badly the back is warped (the phone is basically glued-into the case).

I am in the process of fixing the unrelated non-financial problems which are blocking me from ordering a replacement battery — hopefully, I’ll be able to make an order in about a week’s time. My (current) intent is to order both a battery and a new back case. In the meantime, I will look about for a local-ish Angel to check the failing-battery hypothesis. I don’t know anyone else who has a Fairphone, albeit I’ve met multiple people who are interested and like to see mine.

So you haven’t taken the battery out to see if it is warped ?

It could do with checking as it can be a hazzard.

You may want to check out

Every lithium-ion battery has a limited life. Your battery has reached the end of its life if: is not charging well or has an erratic battery behavior. has a poor battery life but you have tried e... 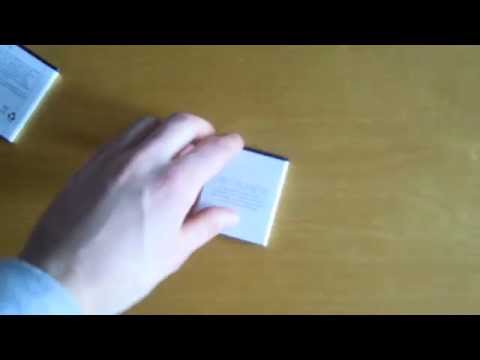 Bingo! You’ve found it. YES, the battery is swelling: It fails the “Spin Test”, I can visually see some swelling, and as a test, I reassembled the phone without the battery inside and the case snapped back together easily and without any gap. That swelling would also, of course, explain the seemingly random behaviours (the various Phases), as it presumably causes poor contact.

I’d never heard of the “Spin Test” before

, and since I was mostly inspecting the contacts

So the plan has changed: ASAP I will be ordering a new battery (but not a back case).

Sadly, this means I cannot use the phone at all — is that correct? — as a battery needs to be present to boot / operate (i.e., cannot use an external powerpack without the battery installed).

Yes the phone doesn’t work from the supply, that sadly only feeds the controller.
Long gone are the days when 5V was bascially connected to everything.