Hi Fairphone/owners, I would guess that most of us got a Fairphone, because of it’s promise of sustainability in various areas like materials, repairability, etc. Even though we had a Fairphone 2 now for almost four years, it was my wife using it. At the time I installed Fairphone Open OS with opengapps Pico. I myself was required to use an iPhone for business reasons. Now things have changed, we switched and I delved a bit into the depth of this phone. As some of the apps I needed were not running with Open OS, I reset the phone and switched to Fairphone 19.11.2. But this didn’t help either. So I decided to become a Beta tester and update the phone to 21.01…, i.e. Android 9. Now things started to look a lot better.
Looking at the roadmap of Android, version 9 (Pie) was published in August 2018. We are now beginning of 2021, i.e. 2 1/2 years later, and the Fairphone OS based on Android 9 is still in development, i.e. Beta. Meanwhile the current Android version is 11, published in September 2020.
To cut a long story short, the point i’m trying to make is, that if we want to talk about sustainability in the smartphone domain, then the OS is a key factor in how long i can actually and safely use it. It’s perfectly fine to ensure that materials come from sustainable sources, that production is fair, that parts can be replaced, etc., but if we don’t have a path to also use future versions of the OS, then we might have to replace a phone, not because it stops working, but because relevant apps don’t support the OS used anymore. Which is what actually happens with many other smartphones on the market.
I don’t know what Fairphone’s plans are to support future versions of Android on older models like the Fairphone 2, so I can’t say that the roadmap for Fairphone OS does not take sustainability into consideration, but I would hate to have to change my phone, just because the OS does not support new apps anymore, as this would put at least parts of the sustainability message into question.

I’m completely with you, and that was what I expected, when I bought a FP1. Software support, including updates for a looooong time.
But unfortunately that doesn’t lie in the hands of the phone manufacturer alone. For the FP1, Mediathek let them down and didn’t publish necessary driver for an upgrade to newer Android versions.

And for the FP2, it was released 2016, no other phone with a Snapdragon 801 has got more than Android 6 oficcialy, so this is already something special Fairphone has achieved. Bringing now Android 9 to it is a great success (hopefully it will come), although it is indeed a little late.

In addition, if you don’t need official Google certification and complete support by the manufacturer, there are alternative software releases, which are still updated.

Fairphone has been working on an upgrade to Android 9 for the FP2 for quite a while. This work is now in a stadium that makes Fairphone foreshadow “more news” on this “very soon” .

Progress can be followed here …

Users who want to test the beta version can do so …

In addition, if you don’t need official Google certification and complete support by the manufacturer, there are alternative software releases, which are still updated.

With LineageOS for instance, you can install the genuine Google Apps and services via Open GApps, and then there’s Google’s device registration for the use of Google Apps and services on non-certified Android OSes (to not endanger a Google account with violating TOS) … https://www.google.com/android/uncertified/.
Third party Apps might still not like to run on a Custom ROM, though, but that’s a different matter. Banking Apps with their multitude of security checks are a typical and notorious problem, but in the end those security checks are there for reasons.

LineageOS 17.1 on the Fairphone 2 is officially (in their terms) Android 10 currently, Android 11 seems to be coming up fairly soon as LineageOS 18.1.

Personally, I have a Fairphone 2 under LineageOS 17.1 and thus under AOSP 10. I use FDroid as applications store. As I don’t want to install OpenG, I also installed Aurora Store to be able to access some very rare apps normally accessible via the google App Store.But with OpenG (nano max) it is still possible to use the Google App Store.

All this to say that I have no compatibility problem.

And moreover, Fairphone 2 being one of the flagship phones of LineageOS, the developers not sparing their contributions to produce weekly updates, I think that for the moment, the FP2 still has a bright future ahead of it (and probably the hardware could die before the software).

And moreover, Fairphone 2 being one of the flagship phones of LineageOS, the developers not sparing their contributions to produce weekly updates

Small technical remark: LineageOS updates are produced automatically following a time schedule (weekly in this case), which means they are also being built when there are no changes. Recent example: lineage-17.1-20210305-nightly-FP2-signed.zip.

But it is clearly true that the developers are not sparing contributions even after all this time, so all praise to them.

Well, it depends. I guess a lot of people just want a working phone with a manufacturer supported firmware without the hassle to search on this store for app A and on that for app B. Testing different programms mimicking the Google Apps, if they are neccessary for their use case.
So I agree, that it is a realy good thing, that there are a lot of alternatives OS for those, who are willing and able to experiment. But I’m afraid, that’s not a mayority of the smartphone users. And Android 9 isn’t released yet for the FP2 by fairphone.

As some of the apps I needed were not running with Open OS, I reset the phone and switched to Fairphone 19.11.2. But this didn’t help either.

Out of curiosity: are you willing to share some examples?

I’m just asking because according to statistics from Google, having an app being incompatible with Android 7.1 based on the OS version alone would mean to shut out roughly 40% of active Android devices.

Edit: these statistics are no longer on Google’s web pages but can be shown in their software development kit: 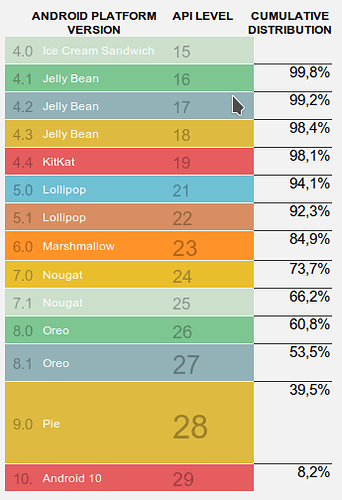 Android 11 isn’t even shown in the graphics. If explicitly selected for app compatibility you’ll get a warning that such an app will run on less than 1% of active devices.

AnotherElk
Small technical remark: LineageOS updates are produced automatically following a time schedule (weekly in this case), which means they are also being built when there are no changes. Recent example : lineage-17.1-20210305-nightly-FP2-signed.zip.

No, the updates are not produced automatically, there are some weeks were there is not any updates.

The automatic update pipeline can of course be stopped, e.g. due to malfunction or for maintenance. And builds may fail for whatever reason and the failed build would not be offered for download.

You can actually have a look at the build system, it’s publicly viewable to an extent … https://buildkite.com/lineageos.
(Admittedly, I’m not too privy with the system. I’m looking at this like I’m flattening my nose to look at a model railway in a shop window

r/LineageOS - Why are all downloads of type "nightly"?

“the nightlies are produced automatically using the most recent commit on the currently-supported branch of development for each component of the OS. That’s all that officially exists. Despite the word “nightly”, however, each device receives a build once per week (all things being equal) due to limited build hardware resources.”

(That was then, in the meantime they did build the nightlies on a daily basis for certain LineageOS versions and devices, but it looks like it’s mostly weekly now. I don’t follow that closely currently.) 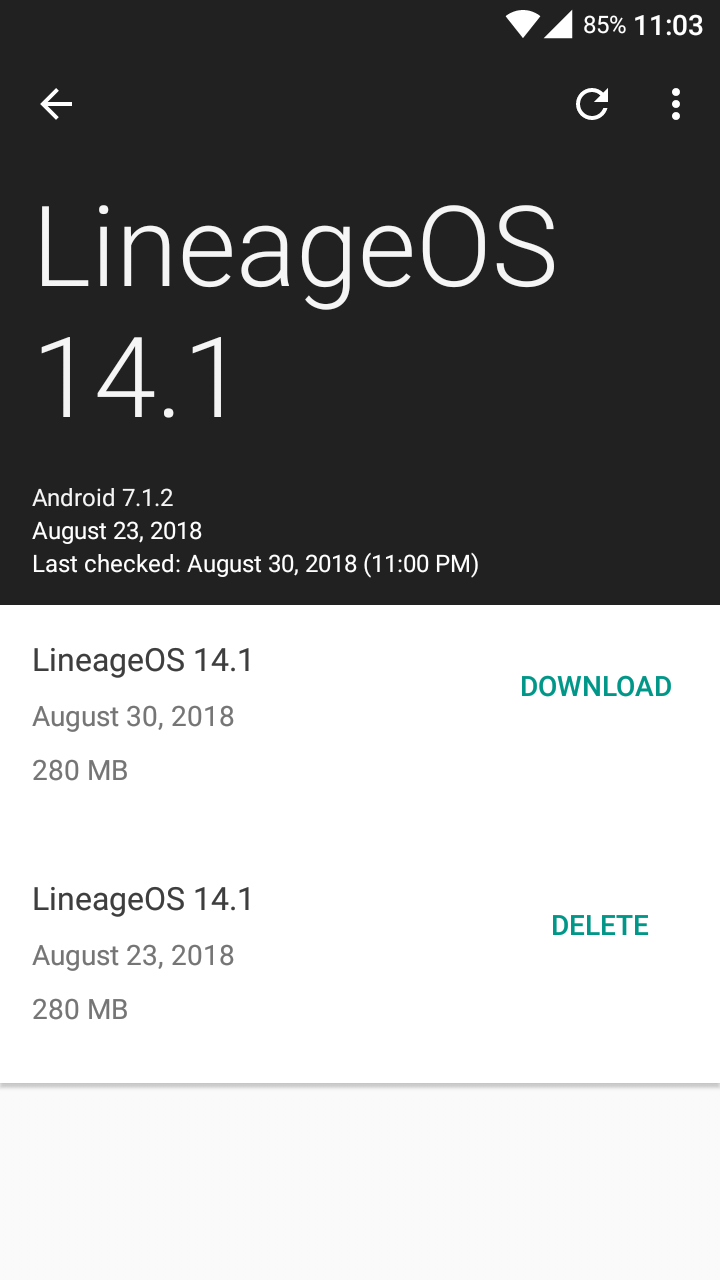 “Hashing the completed build won’t work, the current date is included inside, which means the hash is always different.”

… which also means that such administrative differences could change the file size without any contributed changes.

But you are right. Even without contributed changes the files as they are might be changed administratively, so there are changes, even if those changes don’t change the workings of the OS on the phone.

“What I don’t understand is why are some builds made even if there is exactly zero changes?”

“It’s an item on a backlog a few miles long. Previously (with cm) this lead to a massive influx of ‘where’s my build’.”

So, they were aware that they were doing builds with zero changes, didn’t see it as an urgent problem, and knew from experience that if they fixed this and left out builds this way, people would miss their builds and complain

I appreciate your responses. I’m well aware that availability of Android version 9 is a major step to be able to use FP2 for a while to come and i’m sure this will be appreciated by many users besides myself. I have two samples of apps, which don’t run on version 7: the Swisscard app and the Play SRF app. The Swisscard app runs on version 9, the Play SRF app does not yet run on version 9, but according to the developers this is due to version 9 being in beta right now and will run once version 9 is final. So far version 9 runs very well on my FP2. To the many comments relating to LineageOS. For tech savvy people LineageOS maybe an alternative to the standard OS, but as a market possibly is not large enough ‘to sustain’ Fairphone in the long run.

I have two samples of apps, which don’t run on version 7: the Swisscard app and the Play SRF app.

I know it’s not a guaranteed success, but back in the days of the FP1 I contacted some developer of an app that required 4.4 if there’s a possibility to provide support for 4.2 as well. And he did, explaining what wouldn’t work in 4.2 (which was not much compared to the rest that was working).

The Android 9 roll-out starts today, March 25th, and will continue until April 18th. Since this is such a significant step for us, we want to ensure the update goes smoothly. This staged roll-out helps us monitor the release deployment and react more efficiently, in case of any hiccups.

We effectively use a DIY style to keep the FP2 going strong, enabling people to increase their phone’s longevity.

I wonder if Fairphone support a DIY approach to repair broken bottom modules, and to give them a second life.

I wonder if Fairphone support a DIY approach to repair broken bottom modules, and to give them a second life.

But they could offer a repair service for broken bottom modules instead.