Im a liittle bit frustrated, but its not your fault

So this is the case:
There are here 4 second hand fp2s which when they were received had several problems. The most could be fixed with replacing scree/battery and resets,reboots,charging enz. But the 4 one is here. If you charge it the charging led stays red, it cannot boot normal and if I try to boot in fastboot the led becomes blue, but no Fairphone screens dont appear, I wanted to try fix things and downloaded manual switcher package for Fairphone 2(This after moving around 100 of not accesible topics in fairphone.com and in web.archive.org) after download the script i get says:No fp2 connected. SO I want help. I know the next things:

There has been a topic about red chargings led I cant find, because all links are dead for me
There has been topics about this no start issue, reboot issue.

A strange part is by the way that the most topic are a little bit different. Like some people have same problem, but get a loading screen with blue dots(I dont) .

I understand this is a ommunity forum, but maybe some people can help

Hi Erik,
I moved your post to the help categories.

So do I understand correctly you are trying to manually install the FPOS and after unzipping the folder when running batch for (windows) you get the notification that FP cannot be found? Of so and using windows you most likely need to update the fastboot driver.

Reg the LED when charging: is the battery charging and just the LED stays red or is it not charging at all?

Which android driver should I use? FP2

Steps in short for windows: Reboot FP in fastboot mode Connect to PC Go to windows update Search for updates Additional/optional updates Driver Select and install The driver can then be found in he device manager under Kedacom USB ( similar) not under Android

Ok so its charging. I even get the filling battery picture and yes, the led stays red. I tried indeed to manually install FPOS and the phone couldnt be found. After switching from battery I can start it in fastboot with fairphone screen, but still not detected. Im on windows 10 and in txt is written dont install drivers. It happens autimatically

Not sure which text you are referring to, but you really should do it manually, please see instructions above

to On Microsoft Windows 7 and later:

I would swap the bottom module and see if that helps…

So in windows updater you hit “search updates” and after that still under additional updates-driver updates there is nothing displayed?

Is that the camera mudule on the phone?

No, the bottom module is the one on the bottom where the data cable is connected to…

If the device cannot be found in Windows, no additional updates are offered for it…

This statement at least is incorrect for fastboot driver

No, sorry. I cant press the update button. I hot a cumulatieve update(which trucks at 100% and start again after reboot pc) updates are manager by organisation is because dontspy for Windows 10 Uploading: IMG_20210905_213232.jpg…]()
ca 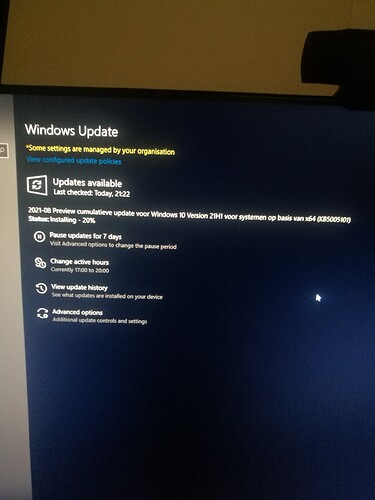 Are you sure you use the correct installation manual, because the official one is the following

Your Fairphone ships standard with an Android operating system (OS). The recommended way to update your Fairphone 2 to the latest software is through the built-in Fairphone Updater app. If you en...

That’s working, because I can Charg for dure and how could i get one?

Because there is an update running, once his is done its again possible

Before It starter I didn’t saw It top, but we are gonna wait until I van het rif of this update

As long as any fastboot driver has not been installed, yet, no updates are offered…

Don’t get what youbwant to say, at least 10-20 user solved their issues after Android 9 upgrade by installing the driver as I recommended