After optimizing my FP2 with FP Open, Xposed, microG and UnifiedNLP (GSM Local Backend and Wi-Fi Local Backend) I have now a perfectly stable phone with excellent battery performance. I tested battery consumption with three setups: Wi-Fi allowed to sleep, Wi-Fi always on, and 4G data instead of Wi-Fi (Wi-Fi turned off), all of them with Google Cloud Messaging turned off. You can see the results in the picture below. Interesting to notice that, despite turning off GCM, Facebook Messaging Lite was still phoning home and receiving messages. Most of my apps, except for a few that need instant alerts, were restricted for background data.

Graphic below showed consumption for this somewhat artificial scenario. Consumption of energy was very low when Wi-Fi is on and set to any of its two modes (flat line between 6h00 and 14h00). Battery stats projected that battery would last for more than 3 days. With Wi-Fi off and 4G on (15h00 to 18h00) battery stats projected that battery would last for 1 day and 3 hours. The two first green bars under “Screen on” represent the time of change of Wi-Fi mode, from sleep to always on then to off. Radio (4G) appears to consume more energy, but I have an impression that Messenger had a role in this significantly higher consumption by artificially keeping radio always on, having less of an impact with Wi-Fi.

Conclusion: use Wi-Fi as much as possible, and “always on” is possibly a better setting under certain use scenarios since it avoids reconnections and doesn’t appear to negatively affect battery. 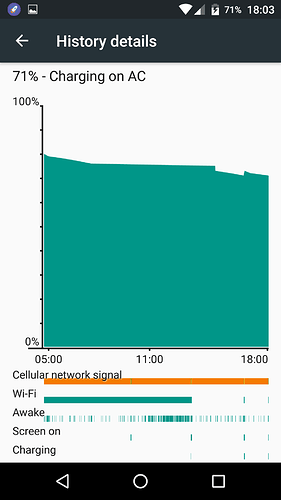 I refined the test with a more realistic setup where Messenger, Telegram and a push E-mail account were allowed to receive instant alerts with GCM on while imposing data background restrictions to most other apps. Battery consumption rose significantly. Below is a graph that shows that battery consumption with Wi-Fi always on, from 21h00 to about 2h00, is slightly higher (steeper) than when Wi-Fi is allowed to sleep, from 2h00 to 10h00. The “awake” bar suggests that the phone woke up more frequently when Wi-Fi is set to always on than when Wi-Fi is asleep.

Conclusion: under realistic conditions Wi-Fi “always on” consumption can be slightly higher if wakelocks and alerts aren’t numerous. In this case setting Wi-Fi to sleep appears to be the best option. The difference between the two settings is however very small. 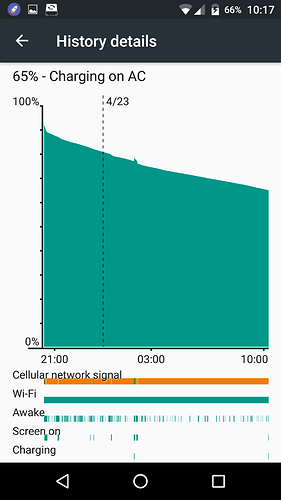 Last test compares battery consumption of 4G data with 2G data under a realistic setup where Wi-Fi is off and the phone is asleep. The graph below shows that battery consumption of 4G data (from 22h00 to 24h00) is clearly higher (steeper) than that of 2G data (from 24h00 to 4h00). Energy savings may come from the elimination of reconnections between 4G and 3G or from the radio circuit being less energy hungry in 2G. Battery stats projected that battery would last for more than 2 days while sleeping if radio data is set to 2G.

Conclusion: I used Automate to create a fiber that changes radio data automatically to 2G when I turn off the screen, and back to 4G when I turn on the screen. It clearly improves battery life when the phone is asleep. 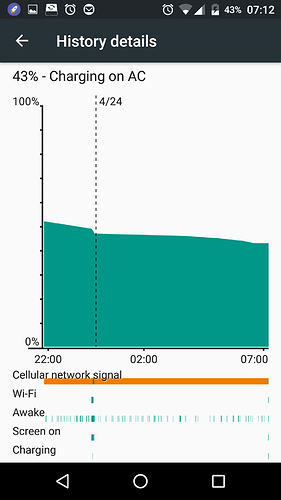 Did you get Automate to work on LOS + microG? Cause the Premium version doesn’t seem to work for me. Can’t get it to install.

Hello, I can’t say since I’m using Open GAPPS. I don’t suppose it can work since it’s a paid app. Evidently there are ways around it, but I won’t advise on that.