Here’s the warranty for the FP2.
Point (h) under “Limitations of the warranty” reads as follows:

damage caused by installing third-party software and/or any malware

So, you will not be able to claim a warranty case, if switching the OS is the cause of the defect. E.g. bricking the phone or destroying the data during installation of another OS.
Fairphone might (or usually does) require you to switch back to the original OS (for the FP2 one of the two official ones), so they can run their tests etc. and exclude the OS as a reason.

E.g. for a broken module, the OS evidently can not be the reason; warranty case if you didn’t break it.

And that’s basically the same, the FP3 warranty is stating.
Your interpretation of point 4.2 i) of this warranty is way out of line; though of course the fear of troubles with installing a new OS might keep some people away.
But then, in my opinion, switching the OS is nothing for the faint hearted anyway; especially when it takes twrp, adb, fastboot and such tools, the user in general never has heard of before, to do this update.

Finally (once again for clarification):
Yes, you still can claim warranty, when you switched the OS.

Warranty should become moot soon enough, the last Fairphone 2s to be sold with two-year warranty (the refurbished New Life Edition) were announced in April 2019 and sold out until June 2019.

So, in other words: would I still get warranty if I switched my OS from one of the OSs on code.fairphone.com ?

The Fairphone 2 Warranty states (in all three versions over time) …

Not much changed about the warranty since your former topic. As long as you can restore a supported OS on the phone, you should be safe …

For an official statement you’ll need to contact Fairphone (via support).

It’s a combined hard- & software warranty statement, so this will likely point towards, for example:

It doesn’t mean that any defects not caused by that software will not be fixed. Though I see how this could easily lead to some burden of proof issues (technically, for problems arising in the first 6 months of the warranty Fairphone needs to prove that it isn’t a warranty case if they feel it isn’t, for problems arising after that the customer needs to prove it isn’t caused by them doing something wrong). This could get tricky in cases where you can’t restore one of the original Fairphone OSes, which is stated a requirement for repair (but note that they mention they will provide instructions to install a supported OS).

The software provision in the warranty is indeed limited to the two OSes Fairphone provide. This means that they won’t fix problems in Software that they don’t provide. This shouldn’t impact the hardware warranty though.

Last night I did the update to 0.14 without noticing that I chose the q-version.
But I still don’t like the fact that I can’t use my custom font like in earlier versions.
Do you think a fallback to pie will be possible without data loss?
also, where would I find the 0.14pie-flash-file? The links in this thread all lead to the source code data files, but not to the flashable zips.

Last night I did the update to 0.14 without noticing that I chose the q-version.

Did you upgrade manually from Pie to Q? There should be no OTA upgrade from Pie to Q as the OTA updater doesn’t support this yet.

I am not sure if this is “new”, but I noticed how fast Wi-Fi would connect/reconnect on /e/OS Q

Given I frequently switch OSes (and my fondness of airplane mode

) on the FP2 I have here, how quickly Wi-Fi connects is something I always notice almost immediately, and with other systems and in the past, always found laggier than now (frequently I’d need to properly disconnect first before a connection succeeded).

Just a little correction: Here is the link for the FP2, since this is a FP2-thread: /e/ image ROM download

Thanks for noticing, copied the wrong bookmark, corrected.

Yes, I upgraded manually. Since the last update before last night I didn’t have the updater in my settings ¯_(ツ)_/¯

It seems to depend either on the build or on the device or both.
It’s the entry above “System”. 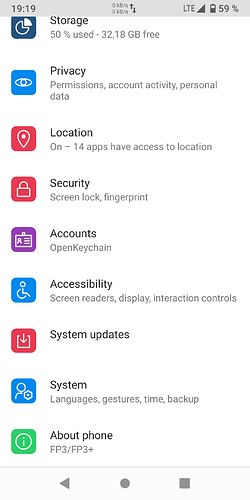 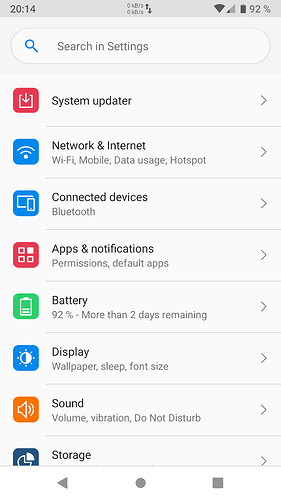 I meant that it wasn’t there after the update BEFORE last nights update. So I cannot check that now obviously

Does this mean I can enter the recovery mode (TWRP), choose ADB SIDELOAD and then flash the Q system image zip with adb sideload filename.zip to upgrade to Q without any data loss?

While describing the procedure, I found out that there is a guide at /e/ …

What I did was to download the .zip (actually on my computer, but of course you can do this in your phone’s OS as well) and transfer the file to the FP2’s SD card. I then booted the FP2 into TWRP and installed the zip using TWRP’s INSTALL button. So in my case, neither ADB nor Fastboot were involved.

But you can confirm that? Or was it a “clean” install?

without any data loss

I can not guarantee anything. What I noticed was that after this initial installation of /e/OS, several apps were already installed that are not part of /e/OS by default (examples: F-Droid, VLC). I had installed these apps on Fairphone Open OS which was installed on this FP2 before I installed /e/OS.

I can not guarantee anything either (obviously : I’m still using pie for now…), but in the upgrade doc it seems to be needed with encrypted phone not with an unencrypted one, or am I misreading?

I’m gonna proceed the upgrade this afternoon and I don’t plan to wipe anything… we’ll see.

What makes you think that?

Well, that’s exactly what I meant : it can be skipped (my english is not so rich…

) my bad for the misunderstanding.
And of course, I agree for the backup.