Dropped phone, stops working and reboots all the time

I dropped my phone (yes, sorry! I was half asleep

)
the first day after it happend, the phone stopped working a few times when put it in my bag or even when I gently put it on the table. The second day (today) however, it stops working almost continuously, even when I’m using it. sometimes it starts rebooting of its own accord, sometimes I have to use the startup button, sometimes I even have to remove the battery to get it to show signs of life. Sometimes I can use it for a few minutes and then it stops again.
I checked most of the topics on here on dropped phones but the trouble is that I’m a totally low-tech person who bought a fairphone out of sheer idealism

I love the modular design but how do I find out what to replace?
I tried the hardware checkup and everything seems to work fine
before doing anything drastic like resetting and all I would like to try the paper-behind the battery trick that is sometimes mentioned, do I put the paper in between the battery and the cover? or underneath the battery itself?

do I put the paper in between the battery and the cover? or underneath the battery itself?

between the short edge of the battery and the battery compartment, so that the battery is pushed more firmly against the contacts. In the ifixit picture below, it’s the side that the finger is pushing against: 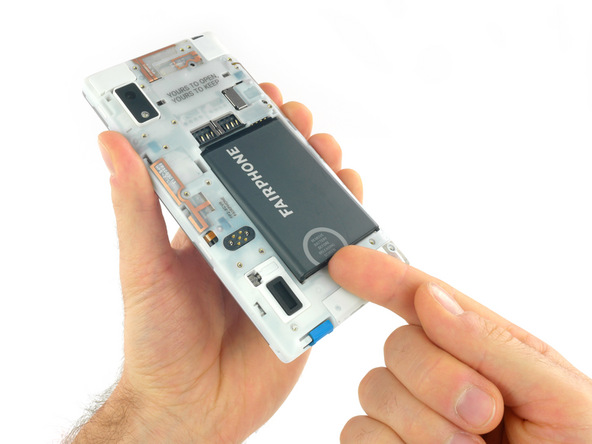 Actually it depends on where you have the (biggest) gap. Take the cover off while the phone is on and see which movement triggers a restart, then put a paper in the right gap to block that movement.