Hi!
I bought my Fairphone 3 last summer so, to me, it’s a new phone. I just assumed it supported esims. But…
I bought one and have no idea how to activate it. How do I activate it? Does FP3 even support esim?
Many thanks!

No is the simple answer

The newer FP4 does

to me, it’s a new phone. I just assumed it supported esims.

Not much, might be incomplete, but the bottom line is: You can’t just assume technical specifications.

Thank you very much for your answers!

Indeed, assuming anything based on thin air doesn’t work haha

Here’s a long list I found with compatible phones:

Download SIM cards directly onto your smartphone | Works in any country | No more plastic, good for our planet :)

It looks legit and I’ll give it a try.

If anyone’s interested, I can update on how it went later.

Hi everyone, I can confirm, that there are already several Fairphone 3, which use eSIM.me and are therefore now equipped with eSIM technology.

Hi, could you share about that? I’m curious if the Fairphone 3 could be modified to be able to make the esims work

FP3s are not equipped with eSiM.

However you can buy eSIM cards that can go in any phone.

From my perspective eSIM technology is not a part of FP3 and the post was advertising a product that can be used to emulate the idea it is not the same as the FP4 which has inbuilt eSIM which doesn’t require a third party or add on.

Maybe others can consider this an acceptable add and leave it in place but given the user name and the one off post I would class this as a spam add.

Why do you state that this is a spam add? Did you even dare to read how it works, before you throw out such things?

Just have a look at the hompage to see how it works in Detail. It seems you will have to pay/receive a SIM card that is equipped with the required technology and you can then load multiple eSIM profiles to it. Just note the FP2 developer are looking into to get it running on the FP2 as well.

Hello,
I must apologies for my lack of tech knowledge. From time to time I read up and ask questions but usually I am traveling and helping on various farm quite disconnect from the tech world, and it’s all speeding up so fast that by the time I come back to the state of trying to grasp what may be useful or applicable to me, there has accumulated far too much information for me to sift through.

I’m beginning to understand now a little bit more clearly how the eSim technology works, however internally is where I’m lost.
Privacy matters to me a great deal and so my next question would be to the best of your understanding would using an esim card cause significant loss of privacy? If I simply shut off the sim card as I currently do when no using them is that any better or worse than an authentic embedded esim?
When I bought my fairphone after following the company for many years I was disappointed to realize it had android loaded on it and had to get help changing it to the E/OS.
I have a chance to attain a FP2 and so if that can utilize the esim tech in a more private way than if I was to get an esimcard for my PH3 I would highly consider that option.

Thank you very much for your clarity.

I was disappointed to realize it had android loaded on it and had to get help changing it to the E/OS.

/e/ and Lineage for example are all versions of Android, with degrees of de googling. Add to that that a) not all code is open source and b) the open source code is so large that there’s probaly lots of options fro security leaks.

Say that I have stayed with the default Fairphone Android and removed more google stuff.

I have a chance to attain a FP2 and so if that can utilize the esim tech in a more private way than if I was to get an esimcard for my PH3 I would highly consider that option.

Also not all networks/carriers support eSIM, so best check with your provider that they support the eSIM

Hi!
So I finally received the esim and installed it and… it works!
I’m now having LTE through 3HK. So happy about this

Have a nice day,

I placed an order however it takes a very long time to receive the eSim. The support is not very responsive.

How long did it take for you?

Being in Mexico, I think it took a month? I thought it was because of the distance. But, if it’s each time like that, they have to know. It’s not ok.

The support was very responsive. It’s weird they didn’t reply to you yet.

I live in France. Finally, I received the esim. It works with 3HK and B&YOU 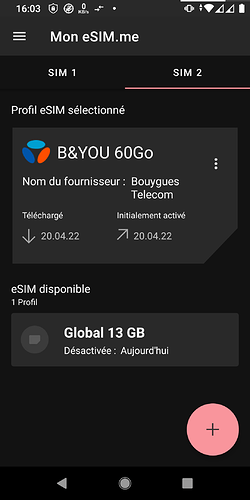 Great!! How long was the delivery in the end?

Around couple of week

I’m curious are there any cariers that actually dont provide normal sims? as far as I know you get the option between normal sim or e-sim you also have the posibility to switch between them for free (which i did before). So I dont understand why people would pay for a serivce that makes an e-sim into a normal sim. as far as i know its mostly just high end phones that support e-sim

I had issues with all the 3 esims I tried to load. And they all came from the mobile provider so, in your case, SFR. Just in case, I’d send an email to both sim.me and SFR and see what they say.

Note that I have one esim that still doesn’t work because, I don’t know, they’re dumb or something. Because of that, I lost my principal phone number :’)