"Do not disturb until next alarm" has disappeared

Hi
Until I upgraded to OS17.07.6 there was the Do not Disturb option of “Total Silence”+ “Until next alarm”. This was a really useful feature, why has it been removed and more importantly is there any chance of getting it back?

I know there are other similar features and options (e.g. scheduling and Alarms Only), but none are the same or as good as this one.

Are you sure? For me it’s still there? Do you have an alarm set, atm?

Yes I am sure. Previously, like you suggest, the option would only appear when you have set an alarm, as a third option, but now only two.

You have the same OS?

I have tested it: The option “until next alarm” is missing although I set one (recurring) for the next morning at 6 o’clock. 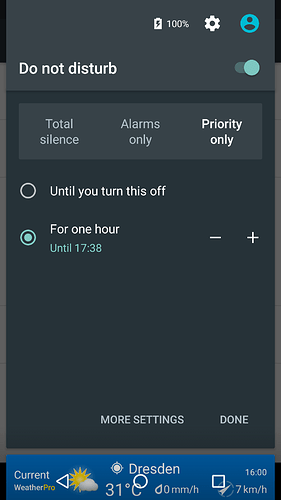 yeah, so scheduling is an option if you regularly keep the same hours.

The reason that this function was great was it is just a one off selection, and the good thing is that as soon as your alarm goes off you are automatically in normal alerts mode.

I have found myself recently getting to work and my phone has been in DND since I woke up and I have missed notifications because I was used to it turning itself off.

That’s really strange. I was sure it’s there. It’s definitely there on my Android 7.1.1 Sony. Will check with other devices. So useful!

Yep it disappeared from my phone too mysteriously… Haven’t upgraded lately, haven’t changed anything… My FP2 is cursed…

TLDR: It’s an Android 6.0.1 bug that happens sometimes near the end of the month. The option should return tomorrow.

I can’t really believe it, but this seems to be a known bug in Marshmallow. I remembered that this happened on my Sony a year ago and found this in a forum

“Do not disturb until next alarm” option disappears every last week of every month, reappears 1st of every month. This is Google’s problem AFAIK, it’s there since Android Lollipop.
Source: https://talk.sonymobile.com/t5/Xperia-Z3/do-not-disturb-until-the-next-alarm-mode-disappear-after/td-p/1123040

More can be read an Android Police, including this work-around:

After a little feedback from our commenters, we’ve found that 1) […] 2) it’s possible to work around it. If you turn off the automatic date function in the Android settings menu and return the date to something either before December 25th or after January 1st, the Until Next Alarm option returns.
http://www.androidpolice.com/2015/12/27/the-until-next-alarm-feature-in-do-not-disturb-mode-is-weirdly-disappearing-from-6-0-1-devices/

It might even be related to holidays? Nowbody nows what Google did here, i can only confirm this is not happening on my Android 7.1.1 devices, neither the Pixel C tablet, nor the Xperia Z5 compact. Do Not Disturb until next alarm Disappeared?? • r/Nexus6P

***Edit 3: People figured out it had to do with the date. Change your date to past the holidays and it will reappear. **~~Why Google did this... I...

The only good thing is that the option it will probably return tomorrow. I hope Fairphone might backport the fix from Android 7? Since there is little chance for an official Android 7 release for the FP2?

@Douwe I think this is something for your FAQ/support team to know about.

@rick Do you think we can get this fix into the Fairphone Android Build?
https://android.googlesource.com/platform/frameworks/base/+/12d3393249f8a6d65ad6960758c4fe089ffc72cf^!/packages/SystemUI/src/com/android/systemui/volume/ZenModePanel.java

Update: As suspected, it’s really the known Android 6 bug and the “until next alarm” option is back today. 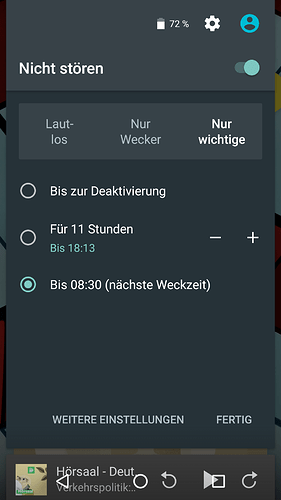 Same for me! WOW

This patch will be in the November releases.