I would pick up the phone and call them. Just have your ticket number ready

I was about to pay when something broke because I had Javascript disabled, so I’ll have to try again later, but it looks like I’ll get my phone back soon

Thanks for your help, support and kind words, it has been an interesting ride

Fairphone support has been great, one of the best experiences I have had so far with customer support, repair center was meh though

That’s nice to hear and hope that this can be solved for all others as well.

That the problem occurs with so many is of course still unpleasant.

Congratulations and long live the repaired FP4! As for me, I’ve been waiting for two weeks for the support to contact me again, but this news gives me hope.

You can try giving them a call, that usually speeds things up a bit

Fairphone support has just contacted me and proposes to send the FP4 back for an out-of-warranty repair, at a price of about 15€, except for more important damages.

Due to the popularity of our new Fairphone 4 and our Android 10 release for the Fairphone 2, we are experiencing a significant increase in the number of support requests.

That’s half of what they have charged me, interesting. I’d like to know what the difference is here

If you send it in to the repair center I’d be interested to hear what they actually charge you, good luck

a price of about 15€, except for more important damages

and I have to add the shipping costs, I think. I’ll keep you informed.

The phone arrived on Wednesday, I had a quick peek and verified it turned on, but I didn’t have time to take a deeper look.

Upon further inspection it turns out that the device still only boots from slot b, not from slot a. I did nothing but unlock the bootloader. The FP4 is my first A/B partition device, so I don’t have any experience here and the information available online is conflicting with some people claiming that this is supposed to be this way while others claim the opposite…
I also had a look into the android documentation but that isn’t to specific either…

Can someone with more experience and/or an unlocked FP4 check if they can boot from one/two slots?

I’ve never been able to boot from more than one slot and I have tried it countless times.

For the longest time I thought that had something to do with Rollback Protection, but according to the Recommended Bootflow… 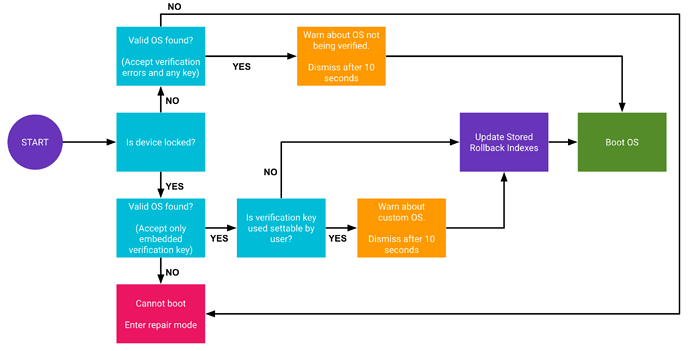 image2408×1228 201 KB
…the rollback index shouldn’t even matter for unlocked devices.
And I just checked, anti rollback protection isn’t enabled on the two unlocked FP4s I have access to.

Hi everyone,
Just to give you some news about my phone. I received a week ago the mail to send back my phone to Cordon SAV. They received it on friday, and today i received the estimate for the repair of the smartphone: 579€ … The price of the phone. And they said that the warranty is not valid.

So i contact again the Fairphone support to understand what is the problem! To be continued in the next episode

Incredible…for sure its no warranty repair, but still no reason for a new device or core module without any explanation. Wondering if they are paid better when they diagnose a defect requiring a core module replacement. Either support should work on communications with Cordon, to ensure they have all information of the case and ensure they adhere to that, or Cordon is def not good for Fairphones reputation in the long run

Oh man, and here I was hoping that the technician that diagnosed my phone was just having a bad day. After I forwarded the information to FP that Cordon would not repair my device it took about a week for FP support to sort it out and make them try again.
I’d reckon it’s probably going to the same for you, since we now know for certain that those devices can be repaired, stay strong

I have no experience with the repaired phone businesses and I really hope FP does not have some weird contract that encourages such kinds of diagnoses. But if they received a flat fee per device handled… I have no idea…

After I forwarded the information to FP that Cordon would not repair my device it took about a week for FP support to sort it out and make them try again.

That’s not a pleasant experience for you or Fairphone. I imagine Cordon try it on as it’s more profit for less work. Pretty sad, rather annoying and just about totally unacceptable. Lost for words.

Juliette, which is very efficient, from Fairphone support just answer :

The repair is effectively out of warranty, as your warranty does not cover damage caused by the installation of a third-party application system.

But she also said :

Don’t worry, I’m the one who manually entered the warranty status here, but note that your warranty is reactivated when the original Fairphone OS is reinstalled on the device.

She is in contact with Cordon to find a solution with them.

The repair is effectively out of warranty, as your warranty does not cover damage caused by the installation of a third-party application system.

Even if the repair would be out of warranty, how can Cordon justify charging 579€ for a phone that’s easily reflashable. You don’t have to pay the price of a new phone to Apple to get your screen fixed out of warranty for example…

These are all criminals… All these third-party service providers no matter where in the world.
They don’t need to be surprised if their reputation is so fucked.

And that passes back to Fairphone. They are having to deal with the fallout.

The problem with this is:
If you outsource these services, then you only ever have the choice between plague and cholera

I juste receive a new estimate for the repair of the smartphone: 29.90€

Now my phone can be fix… As you said, the behaviour of the Cordon Group is really bad and can impact the reputation of Fairphone while their support is doing its best.