Cutting out a Micro SIM: Do providers charge for a new SIM?

Ah. I’ll have to do this before my FP2 arrives.

Ah. I’ll have to do this before my FP2 arrives.

Lazy people like me use the scissors to make a Micro-SIM. My scissors does also not take a fee to do that.

Two problems :
-your sim card may be to old to be 4G compliant
-your sim card electrical contact ( on relatively old sim card) can be too big to permit cutting without literally cutting a half of the chip.

Also, in France, i don’t have knowledge of any operator charging you for a new sim card

In Switzerland no problem… you can change your sim card with sunrise (and any operator I think) as long as you pay for the new one. I did exactly that… because I think that my old sim card was reponsible for my phone getting really hot and battery problems.

I cut mine using a template and my phone rebooted several times an hour until I took it out.

In the Netherlands I had luck. My provider (Hollands Nieuwe) needed to change all the sims just a month ago for reasons unknown to me… Now I have a mini-sim which has breaklines to snap it to micro or nano.
Still one week to go I hope. 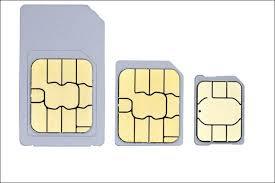 In the Netherlands a new Telfort prepaid (Pay as you go) SIM costs €7,50, for a Pay Monthly contract it’s free.

Cutting a SIM card is easy, there are cutting templates available which shows you exactly how to cut.
I did one where I had to cut through the golden contacts.
No problem, the chip itself is very small, so you won’t cut it.
But you really have to use a template.

However, I had ordered a new SIM from my provider to give him a charity of €10. (Otherwise he won’t earn so much because I rarely phone someone.) The reason is that the contacts are also on the edge of the sim card now (where the metal of the FP2 holder is) and they are worn out. The sim card still works after cutting. I just copied my contacts into the computer.

Generally it is good to get a new SIM card now and then because old SIM cards can cause problems with your phone (similar to what @Jon1 describes).

And the SIM cards the FP2 uses are the smaller version than the FP1 uses, am I right?

And the SIM cards the FP2 uses are the smaller version than the FP1 uses, am I right?

I just walked into an independent phoneshop and asked for cutting my SIM for the FP2. The nice guy took a little press and stamped out the SIM. He gave me both parts back without any fee.
At home I put both pieces together just for interest and it worked with the old phone.

In my town they charge €4 just for stamping…

Free SIM replacement on a Vodafone contract - you just go in the shop and they had over a new one. Got mine in November in expectation of a new FP2 arriving any day … then upgraded my contract in prep for 4G and got “free” unlimited data for a month … which has now long expired before the FP2 has arrived! hey ho.

I also didn’t dare cut my (6 yr old) SIM - but it’s worth a go as if you break it you just have to get a replacement from the provider.

For my current phone I had to cut my standard sim into a nano one, so I picked up a template off the Internet and cut it down. It worked but every time I booted the phone it would not recognise the sim card: had to take it out with phone switched on, place in back in then reboot the phone. Annoying although I don’t switch it off that much. In the end I asked my provider, Virgin UK to send me a nano version of my sim (same phone number) which they did for free within 3 days…

Vodafone in the Netherlands doesn’t charge you anything if you need a different size SIM.

I currently have a 3-in-1 SIM that can be snapped off at the size you want it to be.

Proximus in Belgium doesn’t charge anything if you just go to any of their shops to ask for a new SIM.

I’m not sure if I already have the right size or not. @Lidwien posted an image somewhere in this forum that shows the different formats of SIM cards in a single view, but I can’t find it back. Maybe you’d like to repost it in this topic for easier access for anyone with this question?

I did cut mine with scissors using a template online (which is, in a way a DIY stamping/punching method). I had a 2 year old sim card and so far it works perfectly in my new FP2