Closing all apps at once: Technical vs functional

I was looking for a way to close all running apps at once and stumbled onto this topic: “Close all apps” button .
The answers given in this topic makes me think about what is good from a technical perspective and what is good from a user perspective. The user asks if there is a possibility to add a button to close all running apps at once. Some android versions, on some Korean brand for example, have that option. The replies she or he gets are “no”, with a technical reason as to why this is not an option; apparently it is better for the battery usage to run the application in the background instead of opening and closing it all the time. Is this a good thing to deny a feature from users because of a assumption in usage of apps? This thinking-for-the-user practice is one of three reasons why i switched from the fruity product to Fairphone…

I know from LG G4 running Android 6 this option is available. I am not quite sure what it actually does. I would assume it only kills the GUI keeping the app running in the background. So if it´s no app which is regularly being used such as W****app, a browser, email client etc. I think it is useful. But as it closes all open apps at once without determination it´s not so battery conservative.

I would rather prefer a tool to “force stop” individual apps by an individual black/white list. I had Greenify which caused major troubles after some time.
But manually using the “force stop” option works well for me as I do determine which app I regularly use (per day) like a browser, messenger and which I only use once in a while not needing to stay active in the background such as a pdf/office viewer, navigation, system analyzing tool, sound recorder etc.
It´s data conservative and I am satisfied with the battery performance too.

After all it is not mandatory using such a “close all apps” option if available.

close all running apps at once

This again is a statement which is often interpreted in different ways.
Each so called “task” can have different states. Not every task necessarily means to be a running app. There are many more task active in the background without the users knowledge as they don´t even provide a GUI but still use the cpu, memory and at last consume power therefore.

There can be running, waiting, sleeping, (stopped) tasks and also “zombie” tasks Mr. Smith.
Their states may change permanently without the users knowledge unless he has some kind of supervision tool running (e.g. Top).

An app draining the battery using up all cpu time tends to be Mr. Smith as it´s doing whatever but not being under strict control as the other tasks. Head of the system always is the kernel, but for tasks it relies on a task scheduler.
It ought to take control of the available cpu time to keep the system balanced and (smoothly) operative.
Closing an Android app may switch it from the running state to the sleeping or waiting state. Using the “force stop” option as mentioned above should put it into the stopped state spending any cpu time hence very little battery power.
Any app (respective task) sleeping or waiting may wake up for different reasons switching back to the running state again. This could be due to an user interaction or for checking on new emails, messages or also updating mobile cell information while moving.
There is a lot of action going on in the background which is one answer to the users question why battery performance often turns out to be poor.

I improved the title of the topic and moved it to the appropriate category.

Android, in general, is pretty good with memory management. You will often hear read that “unused RAM is wasted RAM”, i.e. it is RAM that you paid for (it’s not as cheap as normal flash storage), but you are not using.

So what Android does is to move Apps into RAM, when you start to use them and it keeps them there in case you use it again. I think that never Android versions (9?) even try to predict which apps you will be using next.

When you close all apps at once, they get kicked out of RAM and when you start them again, battery is consumed because they have to be loaded back into RAM. You should only do this if several apps are acting weird or RAM gets really sparse and your phone slows down (for example when you are doing heavy multi-tab browsing).

I monitor this behaviour using the app BetterBatteryStats: 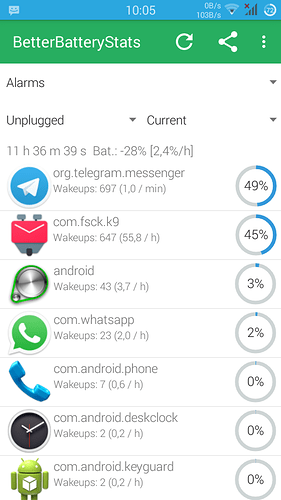 Now, since I still have Android Kitkat this is certainly worse than with newer Android versions because never versions (6? 7?) only wake up your phone periodically when a batch of alarms has arrived (e.g. only one wakeup to check all messenger apps at once). Once a minute, as in my screenshot for Telegram, seems pretty high. Sometimes I don’t get through the day, but my battery is also quite old already.

The measure I take to avoid that apps run in the background is the app Autostarts (it can be found in the F-Droid Archive and needs #dic:root). For example I restrict apps that I seldomely use. This means that they don’t run in the background all the time, but also it means that they never get loaded into RAM (see above) automatically. When I start one of them manually, they might take a bit longer to load. 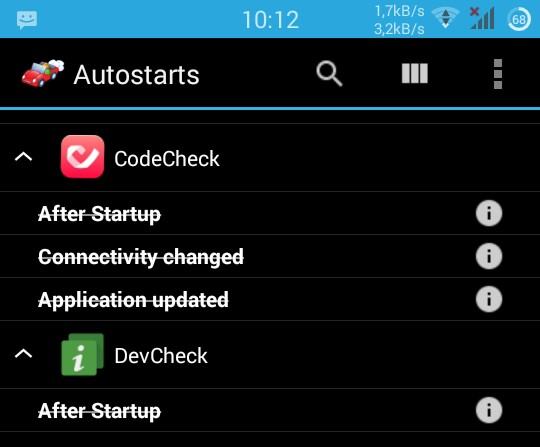 You will often hear that “unused RAM is wasted RAM”, i.e. it is RAM that you paid for

I gladly never met anyone mentioning this.

Linux free (as seen in top and htop) is a bit tricky to read. Linux doesn’t aggressively free memory as much as some other OSes (such as Windows).