Why you did not add this to the Issue list as fixed?

Will we see at any place a complete “change log” / “issue list” for coming updates (which would highly appreciated), or do you only write the big issues down and let it to the FP community to figure out, what you changed, and what you did not?

Because it’s hot off the press, the support article will soon be updated

This is, in general, what the update announcements have looked like:
https://fairphone.zendesk.com/hc/en-us/articles/205679425-Software-update-1-8-7-log-August-2015
Depends on how much detail you need, I guess. If you need a lot of detail: I’m guessing that the fixes will also be applied to the open source code that fairphone publishes, so it will at least be easier to figure out what changed (though not necessarily why). (Well, except for any changes in the blobs)

Side note: from previous experience it’s good to wait until at least the beta test whether some of the fixes actually work for everyone, so it could be that the definitive list will only appear after testing…

This is, in general, what the update announcements have looked like:…

I am aware of these lists of the FP1. I have no exact example but think to remember also there some incompleteness…

Because it’s hot off the press, the support article will soon be updated

OK, than it obviously did not make sense that I reloaded this issue list every second day to check if you already figured out some new fixes, from which some do drive my crazy sometimes while using the FP2…
(at the moment mostly the (in-) compatibility of headsets with mic and the buggy/slowly/hanging dialer app)
Here I hoped for a more frequent up-to-date-information policy…

@therob, the best way to go about this would be to get the changelog from the open source edition. Do you think there is a need to Fairphone to filter that list?

IF the both (the FPOS-OS-edition and the normal FP-OS) containing the same changes it would completely perfect to use this change-log.

But as I did not see the list yet (as it is not ready I guess), I can’t answer.

And if the open source-edition-changelog will include also a lot of small changes, than you can just devide it at the official FP-homepage into “main” and “minor” changes and provide these infos by a expandable list…so all details are there, but only the “big issues” are displayd at the first glance.

Am I not searching correctly? I’d love to know if the update for Fairphone2 that was announced has an “intended” changelog (like https://fairphone.zendesk.com/hc/en-us/articles/205679425-Software-update-1-8-7-log-August-2015)

The reason I’m looking for it is that I’d love to know if the next update will include the latest security update for Lollipop.

Hoping to see the intended monthly security updates be a thing in the future! Thanks for reading

Hoping to see the intended monthly security updates be a thing in the future! Thanks for reading

Currently there are no “monthly” updates. But the Andorid security bulletins give a good overview about whats going on. What’s missing on the FP side are the bug fixes related to the “other” software on the phone (bin blobs, launcher, hardware glitches …).

Thanks for that, fp1_wo_sw_updates!
I’m waiting to see if someone knows which security updates you just linked to will be included…

Google added a new “feature” called “Android Security Patch Level”, so this can also help identify if your ROM got most of the patches. If you trust the person issuing it … and the sources it was based on 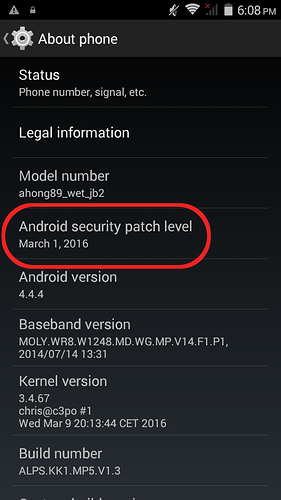