since the beginning of this year I am a proud owner of a Fairphone 4. But since April i no longer get any Software Updates.
Currently I am stuck on Build FP4.FP3T.A.107.20220316 which was released early April. Since then two new Updates came out. I don’t really care about the Bug fixes since everything seems to run fine but the “Security Patch Level 5th of March, 2022” doesn’t really look that secure over 3 Months later. 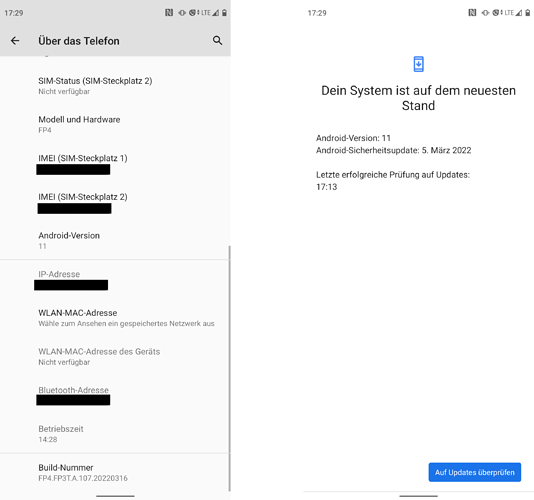 Somewhere I read that the Carrier has to green-light software updates for my phone, so I contacted my Mobile Service Provider. They told me the following:

Has anyone had similar experiences? Any other ideas that might resolve this issue?
I considered trying to install the update manually following the Offline install guide, but I don’t want to lose all my data or accidentally brick my phone… so this would be the absolute last measure.

Yes once Fairphone have resolved the feed back from the networks they then push notification to the users. Some networks and virtual networks can take a long time and have issues still…

For what it’s worth, I see the exact same issue: I’m stuck on March 2022 security updates. My carrier is Digitec Connect, which is actually using Sunrise’s network. I contacted Fairphone support about this, and will also contact Digitec’s support.

@Catwalk, did you find out more yet? Did you try contacting Sunrise support about this again, given that it clearly seems to be a problem specific to Sunrise, despite what they told you?

Good evening, I also have Digitec Connect as the provider of my subscription and have not received a FairphoneOS update until now. On June 20, I wrote to Digitec Connect customer support and received the following response:

"In the case of firmware, it is true that the providers partially cooperate with the manufacturers, for example by passing on suggestions for changes or adjustments, but they have no authority to act as far as this is concerned. Only the manufacturer can release the firmware. The information that the providers themselves release this is not correct according to Sunrise. "

I have not yet written to Fairphone support, but I wonder what comes out of your support request.

@Rocco_Marciello Interesting, do you have your subscription directly with Sunrise/UPC or with a provider that uses the Sunrise Infrastructure like talktalk, yallo or digitec connect?

I just got an answer from Digitec Connect, which says Fairphone is to blame:

I can understand that it worries you that there seem to be newer updates that you unfortunately haven’t received yet. The manufacturers do cooperate with the network operators, such as Sunrise, when it comes to the firmware, but the manufacturer itself decides when an update is released and not the network operator. This means that you would have to approach the manufacturer to find out what the status is. I would have liked to give you a more positive answer but neither Sunrise nor we can release new updates.

Let’s see what the Fairphone Support has to say. Fingers crossed that they won’t just point back to the carrier… I’m also trying to find more people with a Fairphone on Sunrise networks to see if they are affected too, but haven’t been able to so far.

@Catwalk i have the subscription directly with sunrise

I just found this thread and can confirm the connection between not receiving any updates and the carrier sunrise (using an ALDI mobile sim). My FP4 was also stuck on the march or april update.
I was able to insert a sim card from another provider (swisscom) for testing and the updates got delivery immediately to the device. I am now on FP3W.A.128.20220516.
Looking at https://support.fairphone.com/hc/en-us/articles/4405858220945-FP4-Fairphone-OS-Release-Notes, it seems that FP4.FP40.A.142.20220628 was just released. However, my FP4, again on the sunrise network, is not picking up this update.

I understood that some of you have contacted the carriers without any result. But has someone opened a support case with fairphone now? Or is this forum thread something FP support will participate in?

Whereas Fairphone do look in now it’s usually only to check up on their own topics. It’s always best to contact them if you want them to be aware of you experience and views.

Fairphone will hopefully know which carriers the updates are scheduled for, but not when.

@banafp i have solved this like you, after insert the Sim-Card from another provider it shows that an update is available.The funny thing is that the SIM card is from my holiday in South Africa. Network never found it but it shows me an update

I have also plugged in another SIM (Swisscom) in my Fairphone after your feedback and the update has indeed appeared. I then did not install it and changed the SIM back to digitec connect. Subsequently, the update disappeared again… 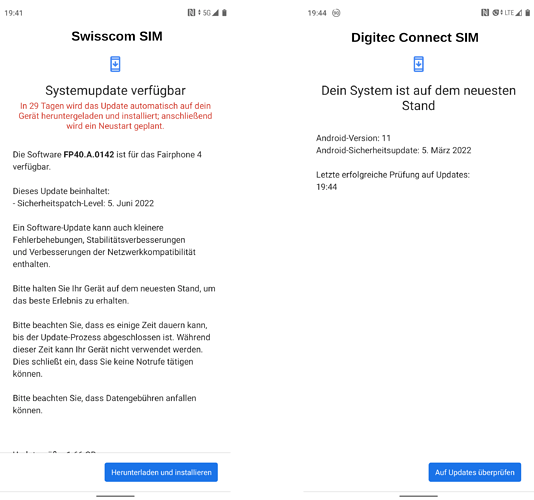 @The-Compiler, have you already received a response from Fairphone support?

@Catwalk
Exactly what i did, i hope this topic will be solved asap

I also got a Wingo SIM from a workmate (Swisscom network) and was able to install the update with that. After doing so, everything still seems to work fine even on the Sunrise network.

Guess if this isn’t resolved soon, I’ll need to get a Salt/Swisscom prepaid SIM from somewhere just so that I can do updates

I have Digitec Connect and therefore the Sunrise Network.

I have encountered the same problem. Wondered why I didn’t receive current updates, but then forgot to investigate this issue.

But its true, I was also stuck on the version from march.

Luckily, I have a old eSIM installed from Wingo - even if no subscription and network connectivity, the activation lets me update to the latest version of july.

Today i received a Update notification for the newest update.

I can confirm. I have received an update notification as well - on sunrise network. Very strange. I hope it stays that way