Could I have bought an incompatible card? The one that I have is a Samsung 128 EVO Plus. That’s what’s on the card itself. Other info on the packet days that it has 128GB. microSDXC UHS-I Card. Class 10 4K UltraHD.

In my experience, I have tried several times and after very carefully pushing the card in with my little finger a little further than the end of the frame, it clicked.

Hi @Theo7 Do you have an old SD card that you can try?

Nice to know at least you have formatted it outside the phone, and not by the infernal Internal option provided

Yes, I do. I have a micro SD card in an adapter in my camera.

The old one won’t fit either

The end of the card doesn’t reach the frame. I have tried angling it a bit from side to side and up and down.

Perhaps I will give it another go.

I have just taken a pic to show how far I can insert the card before it reaches some sort of stop. You will notice that I have removed two of the screws in hopes that it might allow something to line up. It didn’t. 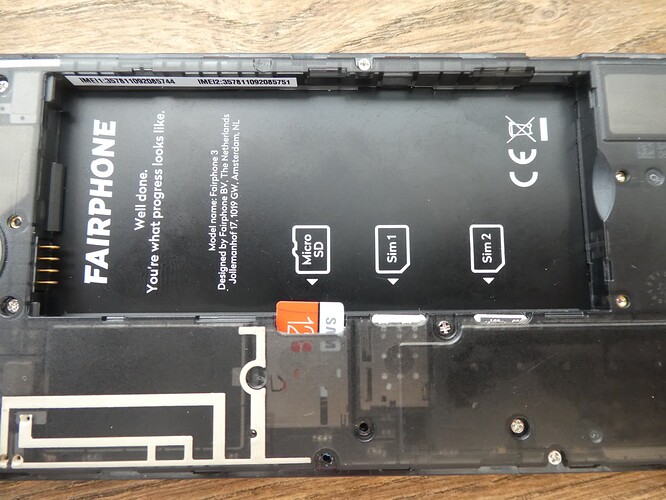 I am not sure if you are inserting it the right way. When you insert it, it should be directed in a way ressembling the shape of the Micro SD symbol next to it.

Maybe it needs to be inserted with the writing on the backside?

UPDATE: Ah, nevermind. I compared with my own (Samsung) SD card and from your picture it seems that you did it all right.

Hi Nick
a) can you fell the spring when you push it in, your picture shows about how far it will go before you have to push against the spring.

b) I don’t know whether it’s the angle of the picture but all the cards seem a little out of line,

c) You definitely shouldn’t have to remove any screws to see if that helps.

Do you know anyone else with an FP3 that can assess if the spring is just stiff or there is something wrong? and
how long have you had the phone as clearly Fairphone will want to know as soon as possible if it is a manufacturing fault. #fairphoneangel

I have followed the little diagram and made sure that the position of the cutouts match.

So I am certain that I have it the correct way around.

I agree, Amoun. The cards do look a little out of line in the picture. Both Sims are working fine. It’s just the SD that won’t go in.

There is no indication of pushing against the spring. I am coming up against a hard stop.

Are you sure that is a standard micro SD card as they have a ledge/flange on the top outside edge so you can pull them out of non spring type slots .
Here’s a picture to show what I mean }~ to the right you can see the extra height. Maybe you could also take the SD card out an show it in it’s totality. I’ve this weird idea that it’s not a standard SD card. Is the shape the same i.e. it narrows at the insertion end, if not it won’t go in and definitely is the wrong sort of card, and I’ve never seen another type.

Actually when I look at the image of yours more intently l think I can see the raised edge. Oh well!

One other thought where did you buy the phone, from the Co-op or a UK based shop as you could take it there/back to be looked at.

No. I bought it on line. Do I will have to get in touch with support.

Not going to Cornwall. I have to confess I am quite pleased not to be going. It will be sooooo crowded!

Thanks for all the help and advice.

I am feeling thoroughly negleted by Support!

Ieuan suggested that the SD size was out of spec abd that I should try another, which I did. He asked me for a photo of both of the cards that I had tried, which I supplied a week ago and now nothing!

I have, of course, checked the zero error on my vernier calipers.

The measurements are fractionally shy of the standard spec.

I suspect that the socket on the phone is faulty and it will have to go back or I will have to repair it mysef if that’s possible.

Do I need to take bite the bullet, ditch the Fairphone and get a normal phone?

My reading are that the micro card should be no bigger than 15 x 11 and the thickness 0.7 (0.6 to 0.8) It appears your cards are slightly on the large side.
http://www.supertalent.com/datasheets/5_112.pdf

But of course the slot maybe damaged? Does the card go part the way in or not at all.?

The spring to hold the card in the slot could be no longer in position. The question is, how did you remove the old card? If you did not push it in first to proper release and remove it afterwards, but pulled it out under force, chances are that the spring is loose and blocks any further insertion. If this is the case, go to a repair shop, they can fix things like this…

There has never been a card in the slot before.

I think that the repair shop is the way to go. It’s still in guarantee but there is only a couple of weeks to go so I will risk invalidating it.

It goes about 2/3rds of the way in. I was expecting a spring but there was none.