It’s just a silly idea, but what do you think about changing the colour of the like symbol from red

Edit: Please vote in the poll

Why? What’s your thinking?

LOL can’t say I’m bothered either way, just wondered if there was any other reason

Exactly! We should in a second step also change the skin colour of the emojis to blue.

I only got aware that I always use

on the forum instead of

when I wrote a heart in my posts. The blue one feels more appropriate for the Fairphone forum.

I can live with both as long as the red one is still available in the emoji supply. I do think though that red is the more natural and intuitive colour connected with the heart.

I do think though that red is the more natural and intuitive colour connected with the heart.

That.
Using blue seems rather cold-hearted

And why is your heart in “I❤Jesus” pink, not blue?

I see it as black/gray. I guess it’s a Laurel/Yanny situation (or depends on your OS).

I’m a total blue/green/white kind of person who’s very rarely much fond of the colour red, but I think in this particular case, the heart should remain red. If I get it right, we are solely talking about the like button right under a comment. It has a grey contour by default, red countour when you hover over it and turns opaque red once you have pressed it. I think if it was blue, it would not stand out sufficiently to remind you that you already pressed it. So mainly for functional reasons, I’d opt to keep it as it is.

I think if it was blue, it would not stand out sufficiently to remind you that you already pressed it.

And why is your heart in “I❤Jesus” pink, not blue? 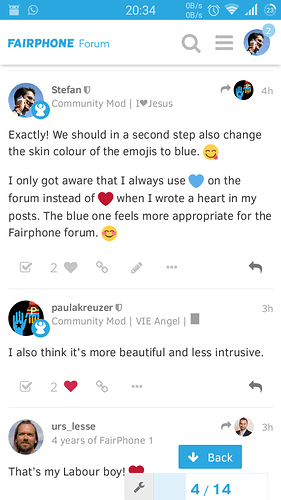 Screenshot_2018-08-31-20-34-41540×960 107 KB
Screenshot taken on my FP1. I do have differently coloured hearts in my keyboard, but I think emojis cannot be used in user titles. It is the Unicode black heart (Wikipedia) in this case. Your viewport must be exchanging it with a pink emoji heart.

Edit: Emojis can be used in user titles, but I do like the black heart more.

@roboe, wow you were fast in creating an add-on! Unfortunately it doesn’t work in Firefox Mobile after a successful installation. The like symbol is still red here.

Your viewport must be exchanging it with a pink emoji heart.

It’s showing the same (pink vor red, definitively not black) ike for @TobiasF on my FP2 using Fennec, no addons or changed forum settings. Whatever my “viewport” might be and do…

It’s your operating system (or, in some cases, your web browser) that’s replacing the

U+2764 HEAVY BLACK HEART with its emoji representation, as @Stefan mentioned above.
Emoji are part of Unicode (i.e. they are encoded as normal characters) and the system replaces them with its picture. Usually, emoji chars are “new characters” in empty spaces of the encoding, but in some few cases, they replace already filled characters. You can observe this behaviour e.g. with card suits: 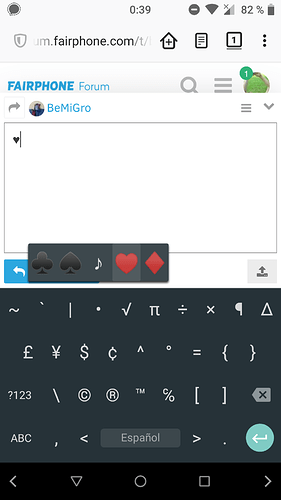 These existed before emoji got into Unicode, and have been since emojified. A system that doesn’t support emoji will render those chars as per the font used, instead of using their emoji picture. This may be not easy to observe, because this forum software (Discourse) also replaces emoji characters it finds on replies (but not other texts like user titles) with their Twemoji picture for compatibility and consistency.

You can learn more about how emoji work and a bit of history in this favourite post of mine written by Veekun (and all over their blog, in fact): Apple did not invent emoji

Unfortunately it doesn’t work in Firefox Mobile after a successful installation. The like symbol is still red here.

An update is on the way,

It was an issue with specificity. If you are curious, some responsive media query enabled a redundant rule in Discourse with greater specificity that overrided my custom rule.

wow you were fast in creating an add-on!

It’s just a CSS sheet with a simple JSON manifest inside a ZIP file! You should try it, it’s easier than you may think.

for a trip around the

) how to implement them into the Forum while they’re