Battery life on FP2 with Android 9

A quick update on battery life - I switched off Location, uninstalled a few apps, and clamped down on apps’ network access even more strictly using NetGuard. I’m not sure which of that helped, but I’ve gone back to my old battery usage pattern which I had under Android 7, where overnight use flattens out.

Here you can see the changes taking effect on the third night: 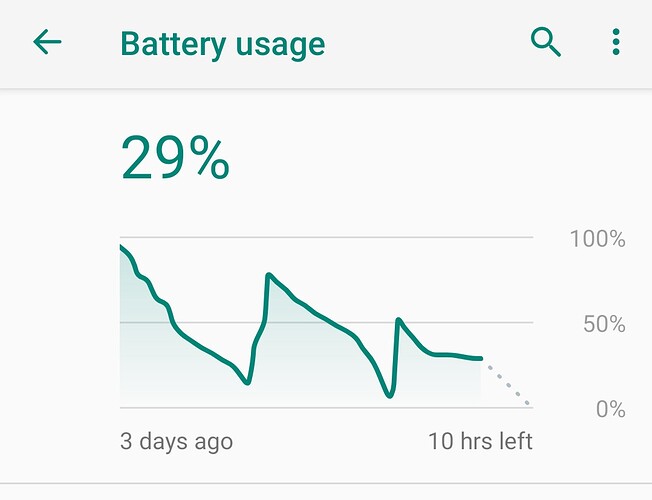 And a single night’s power usage: 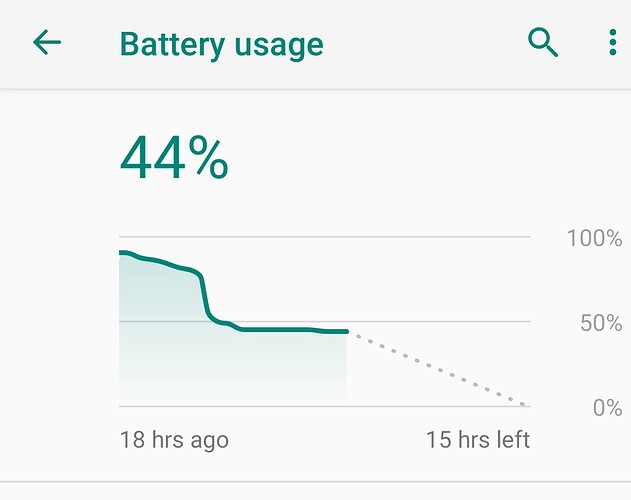 Still running a proper multi-day test, but hoping to get a few more hours out of one charge than under Android 7 at this rate.

4 Likes
FP2: Battery issue after update to 21.01
Redefining longevity: Android 9 now available for Fairphone 2
Battery FP3 suddenly bad
At night, is it better to switch off the phone or to put it in airplane mode?
amoun April 14, 2021, 11:40am #2

I think a new topic[ Battery life on FP2] would be a good idea, you could ask @moderator to create and move you post

@moderators Hope I’m going about asking this the right way - would it be possible for you to move my post above to a new thread, “Battery life on FP2 with Android 9”?

Just to be clear.
Looking at the first image I note the two rises in “capacity” what causes them? It looks like charging as the recovery is quick.

And then in the second image is there is no charge and the levelling off is night time usage.

If I’m correct then the continuing drop (first two) in capacity in the first image continues much as daytime use ???

On the first image, the first peak (3 days, left of chart) is the initial charge to ~95%. It then drops constantly with use, but also overnight. The second peak is a recharge to around 80%, which then also drops down to nearly 0. The third peak is me charging up to ~50% and then some evening use, but then it levels out overnight instead of dropping down. (Each night I set my phone to airplane mode.)

The second image starts at a fresh recharge to ~95%, a gradual drop off during the day, then a rapid drop off during evening use, and then a fairly flat line for the overnight usage.

And yes, overnight use in the first two cycles does seem to carry on as per daytime use. I can’t believe keeping Location enabled would have that effect, so maybe it was a rogue app…

A quick update after a couple of weeks. My last charge has lasted about 66 hours under light use (checking emails and texts mainly), draining from 90% to 5%, with Android 9 and a fairly new battery (new from when I bought it, AccuBattery estimates a capacity of 2,359mAh).

That, for me, is amazing! I don’t charge past 90% to avoid battery wear, but might do a one-off 100% charge just to see how long it lasts for

Battery experience after one week with Android 9:

Until last week (running Android 7) my battery (FP2-BAT02, 2440 mAh) drained fast to zero when reaching about 30% capacity. I assumed that it was weak due to its age of ~3 years and my bad habit of letting the phone plugged into USB of my notebook at work the day over. I know that’s a bad idea and I promise improvement.

After installing Android 9 the drainage was even worse and the percentage varied between restarts, so I feared I had to buy a new battery. But before disposing it I tried the following, with success until now:

As a result, the third charging went smothly from 0% to 100% and lasted significantly longer than before. The battery seems to be recalibrated and drainage is nearly like at the beginning. With all services switched on all the time and moderate usage including Spotify, some surfing, WhatsApp, E-mail, public transport app, tracking of hikes the battery lasts a hole day!