Oh no, I hope my cover stays pretty

if it doesn’t, I think I’ll paint the letters on

If mine doesn’t I’ll try to remove all the remaining letters. But all is fine until now

Indeed! The glue is so easy to peel off BTW. It’s that soft rubbery stuff so the letters really do just peel off, and with a craft knife you can lift the glue off without damaging (it pulls away). It’s really not suitable for this kind of use. Am not sure why they opted for this solution over printed letters since they went to the trouble of embossing/molding the letters into the case. And how did that not come up as an issue when the staff have had them in their hands before mass production? …

Was wondering if who ever go the back cover replaced experience the letters peeling off issue again with the new covers? What did Fairphone change in the new back covers to avoid the letters from falling off again?

I went from owning a FAIRPHONE to owning a FON in a few months. Which was pretty funny at first, but now I own a FO and people are not sure what to think of it.

It’s covered by the guarantee

I sure hope so, but a guarantee is of little use if I need to use it every four months!

Mine was replaced and the letters are slightly larger, therefore less likely to move and better stuck on the plastic. But still not perfect yet, indeed: I’m afraid they could leave again later on …

I moved some posts here from Vote for your favorite color - Fairphone 3 Cases! to keep it on-topic over there.

I can’t remember when the last time I’ve seen or looked at someone’s back cover brand logo. I would imagine most people when seeing the name “fairphone” would think it is some cheap chinaphone anyway.

I don’t know about that, but I don’t think I’ll get a new back cover should my letters peel off too. My phone can function without them and getting a new cover would then be purely cosmetic, which would go against my resolution to acquire less unnecessary stuff. I think I’d try some silver paint instead.

I’ve been on full stealth mode for about a month now and it actually looks kinda cool! Considering filling in the letters with nail polish and changing it up every now and then!

How about rainbow colours?

Let us see a photo or two if you like how it works out.

Hello, I have my Fairphone 3 for three months now and now the F ob the back starts to fall off. Does someone here know what I can do that it doesn’t fall completely off?

Hi hanngiraffe, I moved your post here so you can see what others have contributed about this issue so far.

“Change is in your hands”

Lost the “F” today as well. Decided to go “stealth mode” too and indeed it looks cooler. The brand name is on the front screen anyway if anyone asks which phone it is, so no biggy. It is a waste of money and effort on FairPhone’s side however to keep putting this shiny-white-letter design on the back cover. I hope they will find another way for the next iteration of the phone.

Perhaps it was a more environmentally-friendly way to letter the back, and/or cheaper in production.

I was a logo designer before I made a career change and here’s my humble opinion. The “Change is in your hands” stands out much better than the FAIRPHONE logo itself, I respect the simplicity of the brand, but to most people it would mean nothing, just one of the thousands of random brand names.
Plus names don’t really matter, something iPhone users need to come to terms with.

So it would make sense to get rid of the sticker logo and keep it embossed(maybe scale up a bit), then make the back cover more transparent, it seems the one of the FP2 is more transparent than that of FP3 so you get the idea.

I agree to keep the embossed logo without extra high lighting. I would however move it upwards about a cm so the visible lighter grey board circuit does not interfere with the F and the A as much.

Today I went from stealth to code red!

Yeah, I need to up my nail polish game and find a more robust way to fill the letters. It was fun though and I already am thinking about the next color scheme!! 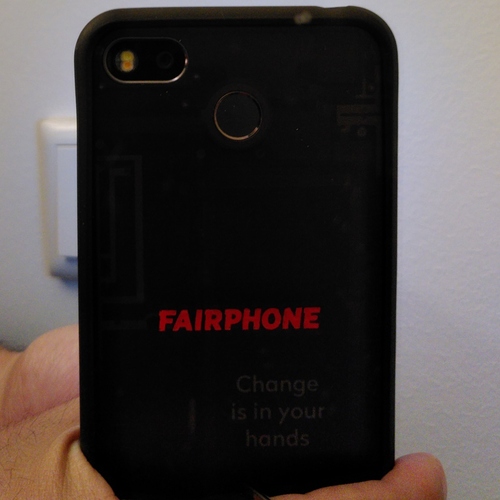 I thought I was immune but I lost the I today. Restuck it for now.

I was wondering if it was possible to get new letters for the back cover of my fp3. I lost an “R” this morning! 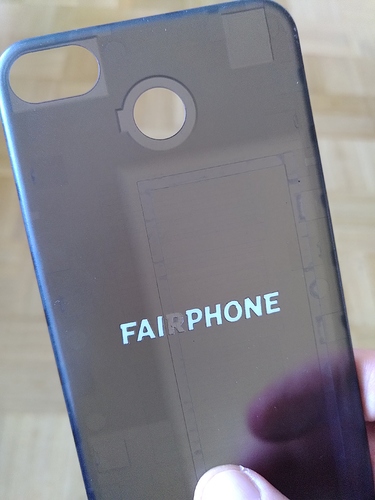