Anyone have a NagerIT fair mouse?

Does anyone have (experience with) a Fair Mouse made by Nager IT. I might buy one, but I’m wondering how the build quality is and if it feels comfortable in your hands.

3 Likes
:pencil2: List of fairly fair electronics projects and devices
Thinking further: what about other "fair" electronics?
fp1_wo_sw_updates May 21, 2016, 7:09pm #2

Does anyone have (experience with) a Fair Mouse made by Nager IT.

Nope, judging by the look I think it will feel like a slimmer version of a standard Logitech OEM mouse. I think Susanne Jordan is not trying to hype her project using a perfect marketing mix and I like this. It’s just a plain OEM mouse. No extras

The build quality looks good material-wise. But I cannot see a thumb rest or other supporting structures. Maybe feedback from different hands could be useful?

I have one and it’s ok. A normal, very simple cable bound USB mouse. Two buttons and a wheel. The middle button is optional, so if you’re used to use it, don’t forget to order this extra. Sometimes when scrolling, the wheel makes noises that sound a bit like a real mouse

Well, I like it, I think it’s beautiful with this green illumination and even the squeaking sound is funny…

I would say it’s rather small and comfortable. I have a Microsoft Wireless Mobile Mouse 1000 as well and I notice almost no difference when I switch between them. Of course, the NagerIT mouse is more reliable, because it’ s cable bound and never runs out of battery, nor has conection problems because of metal objects next to it.

I’ve made bad experiences with the build quality. My NagerIT mouse started to pass two clicks to the PC instead of only one (so it was double-click instead of single click). I sent it in and they repaired it quickly. I had asked for instructions on repairing the mouse myself, but they had ignored my request.

Now, about half a year or one year later, the same problem starts again. I’m not satisfied…

Well, I once had a mechanical problem, I can’t remember what it was, maybe the same as yours. When I wanted to open the mouse and started to loosen the screws, it worked again. So maybe you could try to play around with the screws… 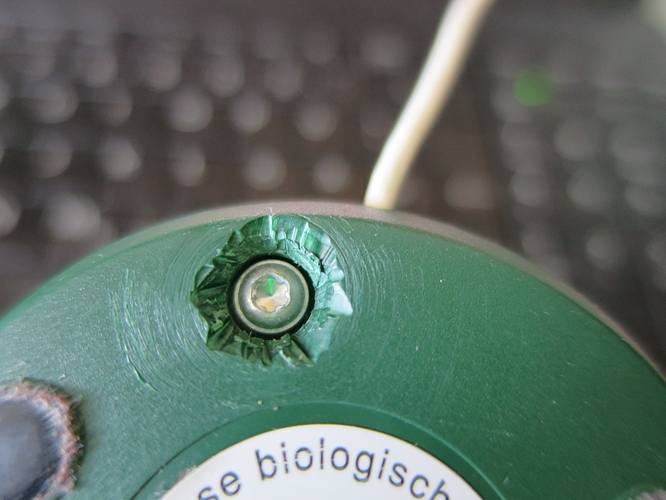 Use it at work, really enjoy using it and at least once a day I get reminded why I’ve bought it and why it is so important to have products like it out there. The housing is made from sugar cane for 80% and only the rest is mineral oil based (hope I got the numbers right). Got aware of this detail only after the purchase and I am really happy that having the mouse every day in my hand let’s me discover more details about the complex topic of fair and/or green electronics. So if you read this you’ll figured out that I am really fitting into their target group (…not to mention my day job). For a couple of days I drove my co-workers crazy because also my mouse produced a mice sound. I had to find quickly a solution or otherwise the Fair Mouse would have become an endangered species at the office and used http://wd40.com/ although I would have liked to have used http://www.ballistol.com/. The mouse survived, the sound is gone and only occasionally I am a bit under the impression that the right-click does not work as good as it should… but it might also have other reasons (hardware/software mix) and I have far too much pleasure using it than getting annoyed by it in any way. And to make this a “full” confession: I even like the “trade-fair” special design (white/green with marbled white/green button) I bought at this www.fairgoods.info fair in the meantime

Thanks for the replies.
I see there’s a translucent version with a LED inside. Does anyone know if the non-translucent ones have a LED inside as well? If so, what parts of the mouse show the LED light then?

I don’t think that the NagerIT mouse has extra LEDs, but that it’s the green laser light the mouse uses for tracking the movements. on the surface. My all-green NagerIT lets out light at the bottom hole and a bit leaves the mouse between the buttons.

My NagerIT mouse started to pass two clicks to the PC instead of only one (so it was double-click instead of single click).

This is normally a bad sign. I only had this problem with really old, non-brand mice. The micro switch brand Nager uses (kailh) is normally rated for 1-3 million clicks I think. I wonder if it was the switch or related to the hardware that connects the mouse button with the switch. Reading yours and @Irina_Spitznagel comments together it sounds that failure could also be related to a “fitting” problem (switch, case, and the mouse button above?). Would be interesting to know.

Checking their website, I see some interesting news (new cases, open plans for the use with FreeCAD/based on Catia5), but it looks like they use Facebook as their main communication channel ;(

It’s that a “Apple” loves you pentalobe screw I spot there? Pretty un-user friendly. [Update: The screw was added later as a fix, not by NagerIT]

It’s probably the only screw they found that could cover the huge hole I dug, trying to fix the mouse myself…

It’s probably the only screw they found that could cover the huge hole I dug, trying to fix the mouse myself…

Good to know! I was wondering about this

Normally the manufacturer hides the screws under the little plastic feet. But I can’t really figure out what kind of screw they use. It doesn’t look like standard Philipps or Torx, it seems to be a bit more “tamper proof”, I wonder why. Do they have to do it this way? It’s just a mouse.

I don’t think that the NagerIT mouse has extra LEDs, but that it’s the green laser light the mouse uses for tracking the movements. on the surface. My all-green NagerIT lets out light at the bottom hole and a bit leaves the mouse between the buttons.

I am wondering why you think it isn’t torx?

I am wondering why you think it isn’t torx?

As far as I know a pentalobe screw is often mistaken for 5-point torx screw drive, but the corners of a pentalobe are round. In the pictures I see, they seem to be round. Torx looks more like a star. But it’s hard to tell from the pictures, but Torx or Phillips would make much more sense.

Anyway, I don’t want to start any rumors, I was just wondering.

My best guess would be TTAP

A ‘improved’ version of Torx. Make sense because one is able to to stick the screw onto the driver.

“TTAP, which is also hexalobular, is designed to minimize wobbling without the need for magnetic bits, a feature that can be important to certain industrial users. Standard Torx drivers can be used to drive TTAP screws, but TTAP drivers will not fit standard Torx screws.” (Wikipedia)

I bought the first NagerIT mouse in 2013, and I was happy with its quality and feeling. Therefore, I decided to order additional NagerIT mice for relatives and computers at work. The first mouse, which is nearly three years old and heavily used, still works as new.

Just ordered the mouse, the version with the black buttons and transparent body. I’ll write a short review when I’ve used it for a while.

I was just able to repair my NagerIT mouse following this great tutorial! It took me just 20 minutes and my mouse is back to normal (let’s see for how long…

So for the future: If your mouse suffers from double-click instead of single-click, it is most probably just this tiny little copper spring that loses tension over time.

Takes a while for it to arrive though

Payment was done three or four days ago so I’m waiting for the shipment now.