After doing the updates from Cherry 1.6 to 1.8.7 and restoring the backups with Titanium Backup the day before yesterday, Titanium Backup starts with the warning that my “Android ID” has changed and asks me if I want to restore the old ID. The app suggests to restore it, but I’m not sure if this would really be a good idea. I’ve hardly found any information about what this Android ID is good for, but in another forum somebody reported severe problems after restoring the old one. Here’s a screenshot of the warning: 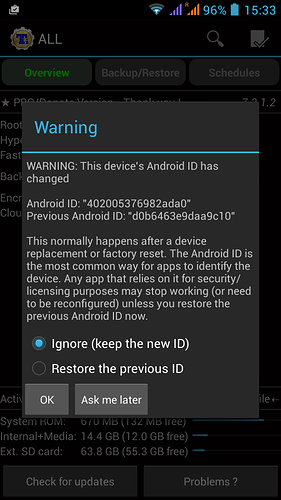 Until now, I’ve always chosen “ask me later”, and it seems that everything works fine with the new ID, but I would like to take a decision. What should I do?

Normally all Fairphone’s have this serial number in the software “0123456798ABCDEF”.
However this gave trouble with some apps (Navigon if my memory is not mistaken).

So a fix got introduced that should change this serial number to the actual serial number of your phone.
Could you check if this is the case for you?

If this is the case then I would recommend to keep the new ID, although I don’t know much about Titanium backup (maybe someone else here does). Also I don’t know if you use any apps that make use of the old “0123456789ABCDEF” serial.

Thanks for the answer, but it’s not the serial number that changed. I checked this already and my serial number, even after the update, is still the generic one (0123456798ABCDEF). It’s very hard to find some information about this “Android ID” (in German “Android-Kennung”). Maybe it’s not important at all, but this warning scares me a little bit…

@Techaddict: I thought the device ID is normally randomly assigned on first boot, and not related directly to the serial number. Or is the device ID lost as part of the fix for the serial number? (By the way, my serial number didn’t change when upgrading to 1.8.5, even though the fix was mentioned in the release notes for that upgrade - not an issue for me, but still.)

@Irina_Spitznagel: Are you by any chance using a FP1 First Edition and did you apply the storage layout upgrade? That would effectively be a factory reset, which leads to the device ID changing as well.
If others are reporting issues restoring the ID, and everything is working fine for you now, I would just keep the current ID. Maybe check that any paid apps you have still work - though most these days are tied to an account rather than a physical device, if I’m not mistaken.

Yes, I have FP1 First Edition and applied the unified storage upgrade the day before yesterday. Until now, all my paid apps seem to work, but I haven’t tested them thoroughly so far.
But this strange “Android ID” isn’t the device ID either, that one is different, I looked it up with a special app. Well, according to another app it is in fact the “Android Device ID”. I’ll just wait…

The Android ID is used by Google Services / Google Play to link your Google Account to your device. That’s why you need to generate an Android ID, if you want to e.g. use Blankstore

Thanks for this explanation! So I guess if my Google Play works perfectly now, I should keep the new ID.

I also tend to get confused about this, because there are so may id’s. (GSF, the Google service framework, also has one - you can fake it in Xprivacy, e.g.).

As far as I can see, it’s an unique identifier, and in theory, some apps should stop working if you change it. However, as far as I remember, all paid apps can be installed on three devices (anyone, please look this up and don’t blindly trust my words, I’m traveling and I’m not going to search for the info now). This would mean that after the third change of a device, or the third hard reset plus re-install of Google apps, you can’t use the app next time.

Also, your GSF id might be tied to it. I’m not sure, but this would mean that in some messengers, you would have to update your device token. Threema, e.g., has an option for this in the troubleshooting section. So does TextSecure.
HTH. =)

Hey guys pls help me i am in a serious troble. By mistake i changed my android’s id without backing it up. And i dont remember my default android id . After i changed my id then i cant link any of my games to my g+ account especially the clash of clans and boom beach so pls help me