Hello there,
I had to replace my SDcard what I used as Adoptable Storage. I simply ejected it, assuming that all data on the SDCard is moved to internal but what happened only partial. Looks like that app data in Android/data was moved but anything in DCIM, Downloads, Documents etc is gone but luckily I made a backup in Recovery (TWRP 3.3.0). Next time I follow 6.0 marshmallow - My adoptable storage is full. How can I move the data to a bigger MicroSD card? - Android Enthusiasts Stack Exchange.

Once I inserted the new SDcard I migrated the data again. During this process, the progress bar jumped from 80 to 20 and to 80 per cent again several times and used storage on the SSCard was less than before but I didn’t care. Later I came across some strange things. WhatsApp wasn’t able to open/store images, screenshots failed to be saved (can’t save screenshot due to limited storage device) furthermore I was curious where e.g. the offline maps are stored as there isn’t that much space occupied on the SDCard

So I did some checks and figured out that the used storage figures in settings are non-sense, see below:

Furthermore, I noticed that why I boot into recovery, the SDCard isn’t recognised anymore in when booting back into System. I have to remove and reinsert for fully functional system&apps 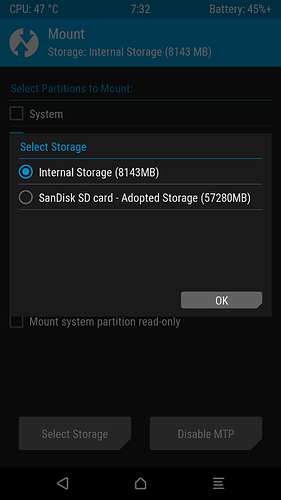 I made similar experiences. To make it short. The adoptalbe storage is just crap.
I soon will back up my data and reformat my SD Card as external storage again. That is way more uncomplicated.

are u unrooted? How to you move apps to the ext SDCard or ensure otherwise that user data /cache is installed on it?

How to you move apps to the ext SDCard or ensure otherwise that user data /cache is installed on it?

With an SD card as external storage … you don’t do this at all.
You live with 32GB of phone storage for everything that needs to be in Internal Storage and you are otherwise happy you avoided a real pitfall as is proven in this forum time and again.

As your use case included …

going to install some offline maps

… OsmAnd for instance, while being installed as an App in Internal Storage, lets you set the directory for its additional data (including offline map data), and you can set it to the external SD card, too.

On the downside, an external SD card will not be available to Android’s encryption, as it is not part of the data partition. But there is a possible alternative to that, too.

I haven’t given up yet.

I did some test it looks like that the new SDcard is faulty, it cannot be used as Adoptable Storage. Each time I’m using it, the phone loses it after one hour at the latest. The only way to resolve it, is to remove and reinsert it.

So I inserted my old one, with corrupted sectors, what works like as expected, so I can exclude the phone as a troublemaker.

I reckon the old and bad SDcard caused a mess in the storage allocation, as there were many red lines about bad sectors when I flashed an update in recovery.
Even when migrating data space calculation didn’t follow exactly.
The only things to resolve it is: 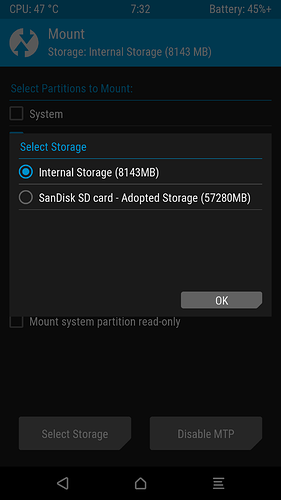 May I try another model but which?