Windows 10 update necessary or not

Hi all,
I am using a Windows7 version of operating system but as Facebook recommends, this will not work in the future and we need to migrate to Windows 10. How far do you think this is essential?

Hi and welcome to our Fairphone community forum.

this will not work in the future

Do you have a source for that?

All I know is that from today on Windows 7 will not get any security updates anymore. I think that is a very valid reason to either upgrade to Windows 10 or switch to a different operating system that is still updated regularly.

BTW, I found your choice of category (Help > FP3) and tags (openos) a little misleading, I think the question is rather unrelated to the FP3 and the Fairphone Open OS. Strictly speaking in a forum for users of Fairphones I’d almost consider it off-topic

I guess “Discuss > The Industry” would be the best fit here.

The Fairphone 3 doesn’t care which OS and which version of it you use on your computer.

If you want to connect your computer to the Fairphone 3, however, you would have to check whether the necessary tools are working on your computer’s OS.

Generally speaking, as long as your current Windows 7 is connected to the internet, you should of course migrate to an OS which continues to get security updates, be that Windows 10 or be that any Linux you might consider.

Windows 10 has come a long way since its first version, it somewhat matured, but is not without faults, of course.
I personally think the criticism it still gets from Windows 7 users is often biased and exaggerated, and often based on not knowing how current Windows 10 actually behaves.

Users staying on Windows 7 for supposedly avoiding Windows 10’s extended telemetry must have stopped updating altogether long ago, because Microsoft backported the Windows 10 telemetry via updates to Windows 7 and 8.1 long ago.

Even worse:
Microsoft is advertising to buy a new PC, as they do not advise to install Windows 10 on an “old” PC, even though that is possible.
And if you use Office 365 (which I don’t), you are forced to switch to Windows 10, as you otherwise will not receive feature updates and security updates for Office 365 will end 2023 when using Windows 7 / 8.1.

That really makes me consider switching finally to Linux.

Problem is, that Microsoft - in the beginning - tried to make everyone switch to Windows 10 with popups and free updates. Now, that you have to switch, to have a secure OS, you have to buy it

Microsoft don’t advertise it, but you can still upgrade an existing Windows 7 installation to Windows 10 for free. Just internet-search it.

I read conflicting info about whether that also works for clean installs, but that was some time ago, I don’t know the current status of that.

That really makes me consider switching finally to Linux.

I guess there never was a more obvious opportunity to consider this than before upgrading Windows 7 to Windows 10.
I checked out some Linux distros myself and I ended up with Linux Mint on dual-boot for playing around.
Over time I’m eliminating reasons not to make the switch one by one, but at the same time I’m a pretty content user of Windows 10 Pro (which makes a difference) … my choice, even if I don’t like aspects of it.

Well, I did not switch to Windows 10 because of the new design and the more resources it needed

My main grudge since Windows XP were the start menu experiments, but thankfully Open-Shell (formerly Classic Shell) reliably takes care of that for me for many years now, cutting the start menu back to the good old Windows NT 4 look if I so choose

.
Then some sensible settings here and there for simplicity, and there I go.

Apart from the obvious touchscreen optimisation I don’t see much difference, to be honest, and I rather like the clearness and simplicity coming from this optimisation.

Regarding resources … any PC I upgraded (and there were some) ran Windows 10 without any noticable speed drop or else compared to the Windows 7 it replaced.
I think it really helps to have an SSD as the OS harddisk instead of a conventional harddisk. Most PCs I upgraded had that already before the upgrade, because an SSD is the most potent booster of otherwise older PC hardware (to a certain degree) compared with exchanging/improving other components.

Please do not take recommendations from Facebook. Else their algorithms can push you in any direction they want (e.g. Microsoft most probably pays for advertisements on Facebook).

I read conflicting info about whether that also works for clean installs, but that was some time ago, I don’t know the current status of that.

According to this article in the December 2019 issue of the c’t magazine that still works, too 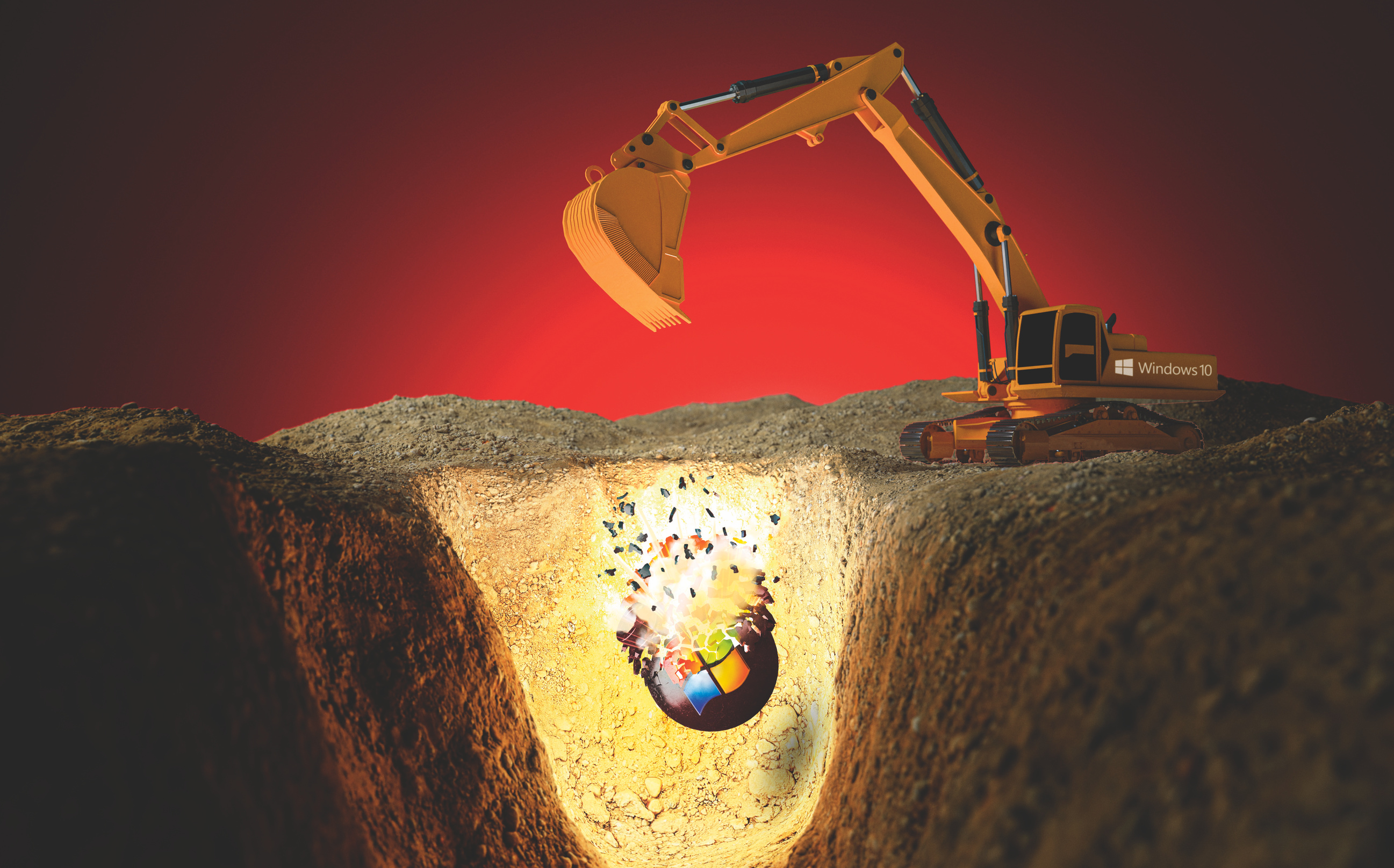 Article is in German and behind paywall, though

For the security aspect alone, I think it’s very important to stay on a supported operating system. However, you can maybe install something like Ubuntu. This is a sort of slideshow on how to do it.

Discover how easy it is to install Ubuntu desktop onto your laptop or PC computer, from either a DVD or a USB flash drive.

There are lots of varieties of it, like Xubuntu for older hardware and Linux Mint which looks more like Windows.

Thoroughly recommend taking a look about, there’s the option of dual-booting if you have the hard-drive space, so you don’t lose Windows programs you may need.

Article is in German and behind paywall, though

The Guardian has a sensible article now …

Support for Windows 7 has ended, leaving Marcy wondering how they can protect themselves

You likely need to ensure your OS is up to date (you might not have to if the computer is not on any network ie. airgapped). Windows 7 no longer gets security updates (unless you got an expensive extended support contract).

For example, BlueKeep was recently a large threat:

NSA advisory urging Microsoft Windows administrators and users to ensure they are using a patched and updated system in the face of growing cybersecurity threats.

And now recently another one:

(Queue joke it said “Windows 3.11 or higher so I installed Linux”

I remember that joke as “Windows 3.11 or better so I installed Linux”

Woops. Yeah, that was it!

Microsoft don’t advertise it, but you can still upgrade an existing Windows 7 installation to Windows 10 for free. Just internet-search it.

Thx a lot for that hint.
I hadn’t realized that. Now I am on Windows 10 Pro as well and everything went just fine.
I will try Linux maybe a bit later.