Wi-Fi Calling on FP2 on Android 10

I’d like to re-open the discussion on FP2 and Wi-Fi Calling - a previous thread on this topic is old and I wondered if the recent upgrade to Android 10 has changed things: How To set up Wifi Calling?

I can’t see the option for Wi-Fi Calling on my handset, but I’ve got a feeling that the SIMs that I have maybe don’t support it. Is there anyone out there with any insight into this?

As debated on the topic you linked, the reasons for which Wifi-calling and VoLTE are not available on the FP2 are partially unclear. It may be due to some firmware lacking, to some software lacking (but this seems rather improbable to my understanding), or even because the chip just doesn’t support it. An update to another major android version could only change the software part (which I repeat, seems rather improbable), since hardware doesn’t change and firmware isn’t updated since the last update of A6 on the FP2. I have seen nothing hinting any change in this, neither have I heard of a FP2 on which VoWifi or VoLTE worked.
So the answer, I fear, is no…

Take a look at WiFi Calling on Lineage OS?. Follow the steps and Discover if you have support. Maybe this info is still accurate do you can check.

I don’t think that’s quite correct. This is just some generic software button.
In the case where the provider did provide both, the following was shown (post under the one you showed):

You are right, the test menu shows the functionality. In my case it says Wifi calling is “not provisioned”. According to their website vodafone UK is providing WiFi calling, but it has to be enabled. I will see if this is possible.

Maybe this info is still accurate do you can check. 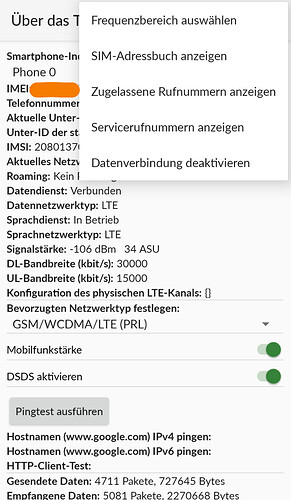 The information in the post you linked is missing (and my povider provides support for VoLTE and VoWiFi AFAIK).

It has hardware support. Look at this . FP2 has the snapdragon 801:
https://www.qualcomm.com/products/application/smartphones/snapdragon-8-series-mobile-platforms/snapdragon-processors-801

It even has volte instead of 4glte garbage

So no, there isn’t hardware support for VoWiFi on the FP2. If it has been proven to work on some specific Samsung devices with the same processor, it may be due to some custom chip or arrangement from Samsung which FP probably didn’t have.

Second, VoLTE is listed indeed in the specs sheet of the CPU, but this doesn’t mean it has hardware support on the FP2. Device manufacturers negotiate with Qualcomm to have all features, and they may not have negotiated to support VoLTE. Then, even if there is hardware support for VoLTE, you also need firmware support, which might very probably not be the case for the FP2.

Sorry, i thought we were talking about volte.
Then its pretty clear why vowifi isnt supported. The case of Samsung is indeed very weird. I doubt that VOLTE isnt supported, because it would be very weird to remove that part.

I doubt that VOLTE isnt supported, because it would be very weird to remove that part.

Well, I think the work to add support for it was simply not done firmware-wise. Hardware support isn’t enough for it to be available on the phone