Unfortunality I dont find someone how has the same issue on his Fairphone 2.
If I use a APP with a black Background I have some white dots on this black background. They are not on a fix position… they “walk” around. So it can’t be a Displayerror. If the colour changed the dots are gone…

Did someone know everything about this issue?

If you do a screenshot (volume down + power button) are the dots on the picture as well? 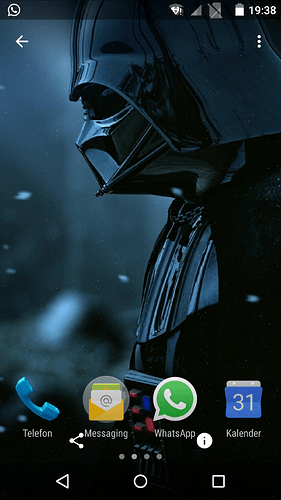 That’s actually a good thing. That means it’s not a hardware issue.

Could it be your background is simply a animated image and the dots are snow falling?

Yes, it good news about the hardware.
No, definitly not… This happens also in other Apps… par example WhatsApp or ZEDGE…
I dont like Live Wallpapers… they needs too much Power…

Than it’s probably some strange App that causes this.

Why I have this also on the Desktop? Not only in Apps…
I have this issue also in Google Play…

Yeah but an app could create an overlay over your screen even if you’re not in that app.

Oh really? I didnt know it. Intesserting. I’ll test it if a app the reason of this issue. Thank you for your help. I’ll post my results here.

Bad News… I rested my phone to factory defaults and the problem is still existing…
I think i open a support ticket.

Or do you a have a other idea?

I rested my phone to factory defaults

Do you mean you made a hard reset? Really strange.

I have no more ideas, but a video of the phenomenon would interest me.

Now I made a Video with this Issue…

I am really the only one with this Issue?

FYI. My phone should be fixed by the support.

I recieved my fairphone back yesterday. the support has replaced the display.
I startup the phone for the first time and the whit dots are still there… so, nothing has changed or fixed.