As you are the go-to guy he will turn to for help, even if remotely, just stick with what you know I’d say.

I mean, you can hardly install Fairphone Open OS or LineageOS and send him on his way to wherever you are not around in person on a daily basis, and say “Oh, by the way, even though I installed this for you, I don’t know much about it apart from that it’s an idealistic choice. Perhaps I can’t help you when there’s trouble, perhaps nobody around you can, but isn’t it interesting? I like it. Have fun!”

Seen like this it seems obvious, but I was more specifically wondering about the system’s stability and assuming it would be quite similar to FPOS in most points, especially I have 3 months to try it out and get used to it myself… Unless it’s very hard to reinstall FPOS from Lineage OS or FPOOS in case it would reveal itself to be to troublesome?

How does he send his pictures?

I was wondering if there was any need for him to install apps that do not come with Fairphone Open OS from the start. To me Fairphone Open OS (or LineageOS) seems less troublesome if you have no Google account and never need new apps.

Unless it’s very hard to reinstall FPOS from Lineage OS or FPOOS in case it would reveal itself to be to troublesome?

It isn’t hard to reinstall the Fairphone 2.

Given a similar situation recently, I went for a compromise: LineageOS with fdroid privileged extension to ensure that updates hapen automatically, and Aurora Store in case the person wants non-free apps (at least those which do not need google services).

I think this could make a big difference. I have read that some banking apps are a hassle under non-Google variants of Android.

edit PS: make sure to set lineageos update interval to once a month, I assume any “non-tech person” does not want to be bothered with an update every day

Given that your own Fairphone 3 has Android 9, LineageOS (Android 9) on the FP2 might resemble more what you use yourself now than FPOS and FPOOS (Android 7).

What about bugs and other software issues? Are there known main problems known to remain on FPOOS or Lineage OS?

Sorry to bring this up, but just to make sure: Do you know how to backup and restore an OS in TWRP? I’m asking because that is an excellent method to change between different OSes much more easily than to erase and re-install them (no need for connecting it to a computer).

I have already reinstalled the entire FPOS once (with a computer), when it was erased -but not my personal data- from a failing update (made through the Updater app, though), so I think I could handle it, I know it asked me for a place where the OS was in the phone’s memory or SD card (and the file wasn’t there, hence the need of a computer)… I guess I could learn from the FP’s support page tutorials and wikis posted here as well in case of problem…

What I mean is that if you know how to use TWRP to backup and restore an OS, you can easily change between all these OSes (the versions are newer now) without a computer (and quicker): 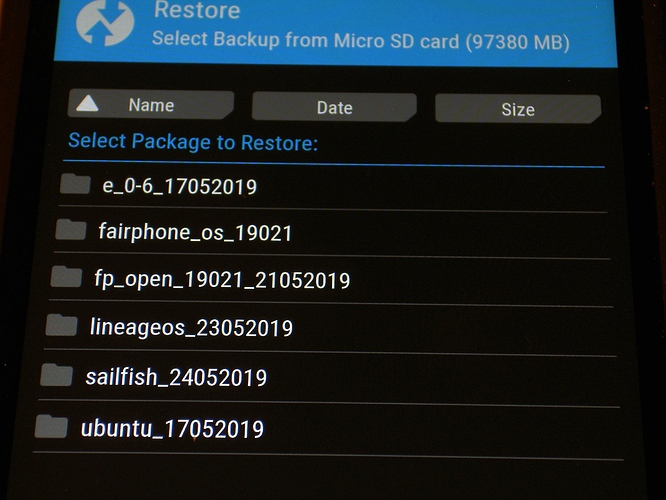 I guess I can download all these OS installation files and then switch easily as long as they are on a SD card (or even in the internal memory), isn’t it ?

Well, the first installations of FPOS and FPOOS must be done using a computer (fastboot etc.). LineageOS can be installed without a computer, if my memory is right. But there are a few things to know … if you want, I can ask my “teacher”

if he is willing to explain everything to you (in French).

Well, the first installations of FPOS and FPOOS must be done using a computer (fastboot etc.). LineageOS can be installed without a computer, if my memory is right.

Why not, I’d like to give a try with these OSes, thanks !

I will let you know if he is willing to

and they end up in a “pictures” folder, too?

It depends on what TWRP has access to in the moment you take the screenshot.

Under normal circumstances there will be a Pictures or Screenshots folder (can’t have a look right now) with the screenshots in the selected Storage.

But during e.g. an initial boot of a freshly installed TWRP, when TWRP doesn’t know its Storage yet, I’ve seen it put screenshots in its own root directory (or similar, can’t have a look right now).