Hii Everyone,
I am very much eager to post that which OS is better or best from another regarding mobile.
Specifically which is better OS between IOS or Android.
Would you please suggest both pros and cons of these two?

You know you are on a forum for an Android phone called Fairphone here right?
So many users here only have experience with Android - at least recently.

Also when it comes to software most users here - especially the regular ones - will prioritize freedom and privacy over features and convenience. So here is my answer from exactly that perspective:

According to studies Google Android is worse for privacy than iOS, but a Google-free Android - as you can easily install on a Fairphone - is of course much better.
For the Fairphone there are Open OS, Lineage OS and /e/ as Google-free Android variants.
There is also Sailfish OS and Ubuntu which are separate operating systems.

For people coming from iOS - and liked it - I’d recommend /e/ as that closely mimics many of the iOS features and the appearance.

In my opinion, iOS is probably very convenient for non tech-savvy users. However, if you like to change anything you don’t like, so it fits your needs better, you’re going to have a bad time with an iPhone, since you can customise hardly anything.
Moreover, Apple’s environment is a walled garden with a wall stronger than even Trump could wish for. Everything works, but only as long as you only use Apple devices. It’s practically impossible to conveniently use Apple stuff together with other devices, they lock people on purpose by making everything else incompatible. And therr is planned obsolescence, meaning that old iPhones are artificially made slower so that people buy new onee more often.

Android on the other hand is often controlled and by G00gle and therefore very bad privacy-wise, but you are able to uninstall that by rooting your phone. It’s also open source and very customisable.

Oh, and then there’s this: 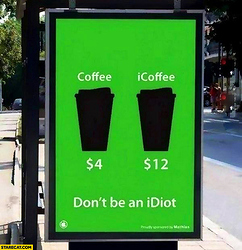