When was/will be the latest firmware update for FP3

somewhere I read, that lineage OS doesn’t provide devices with latest firmware updates. Sound reasonable, as far as I understood: lineage OS for a specific device is kind of an adaption of vanilla android - the hardware layer was developed only once, when the device was joined to the device list…
I would like to know, if the official Fairphone ROMs offer any firmware updates within the OS updates.
This could be a reason to return to stock ROM after years with lineage OS.
Thank you for reading…

that depends on the developer who maintains LineageOS for the respective device.
Custom ROMs for FP3 (and also FP4) normally do include those firmware files.

Hello All, A short update on what’s happening with respect to LineageOS 18.1 for FP3: We have a huge set of changes lined up(https://review.lineageos.org/q/topic:FP3-stock-R-changes). This would help fix most of the reported issues(the Bluetooth audio, the camera). As part of this change, we are now migrating to Official Android 11 proprietary blobs + new and up-to-date kernel source. Since it’s a huge change we are currently involved in an in-depth validation phase to make sure everything wo…

So if you’re using the official LineageOS, iodéOS or /e/OS, you should get firmware updates.

But this is not the case if you use LineageOS4microG, as these builds do not contain firmware blobs.
I once just adb sideloaded the official LOS over LOS4microG to get the newest firmware blobs and then adb sideloaded LOS4microG again.
But keep in mind that a downgrade usually doesn’t work. So the LOS build must be newer than the originally installed LOS4microG build. And to be able to sideload LOS4microG over LOS again, this build must in turn be newer than LOS. Otherwise, the operating system will not boot.
This process worked perfectly for me without any loss of data. Nevertheless, it is preferable to make a backup beforehand.

Thank you, #HolosericaCaligo for your detailed and qualified answer. I actually used lineageOS4microG - and have for some time. So I’m sure some firmware updates have passed by my FP3.
The method of adb sideload described by you sounds like an interesting alternative - technically I dare to do it. However, I see a problem: before a new build of LOS4microG is released, often some time passes. In addition, I have not yet found out how I can determine the build number of the LOS4microG BEFORE the installation - this should be higher than the build number of the “fresh” LOS. Is there a way to avoid boot problems after the sideload?
Kind regards…

On the stock OS side, Android 11 FPOS will be released pretty soon I think.

You can determine your installed version under Settings → About phone → Android version
I use iodéOS, so my latest version is 2.4-20220411-FP3. the numbers in bold stand for Year-Month-Day. 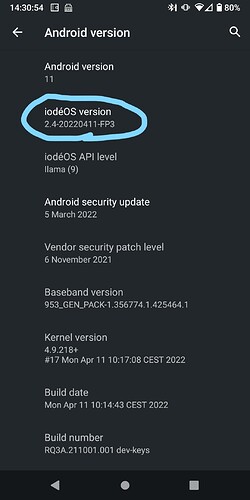 Is there a way to avoid boot problems after the sideload?

If you do this in the right order, there should be no boot issues. But of course there is always a small risk of data loss. You could make a backup of your data first, e.g. with SeedVault. I also prefer to make another backup of my data partition with TWRP.

oh, and one last thing: you don’t have to start your OS after flashing the original LOS build. I think you then can directly flash the latest LOS4microG build, maybe reboot once into recovery in between

I wouldn’t trust the dates if you are comparing releases from different ROMs! That might be true for LOS4microG if they only implement the microG fixes into upstream LOS and rerelease that same package, but you can’t compare for example iode and LOS that way.

Just because something was released later doesn’t necessarily mean it was built on a newer codebase, there is absolutely no guarantee for that, the codebase and cadence can differ extremely between different ROMs.

I wouldn’t trust the dates if you are comparing releases from different ROMs! That might be true for LOS4microG if they only implement the microG fixes into upstream LOS and rerelease that same package, but you can’t compare for example iode and LOS that way.

That is of course correct. I wouldn’t compare iodéOS and LOS either. It was just an explanation of where to find the build date, as I currently have iodéOS installed on my FP3 (and the version name and build date usually match).

But in my experience, the build date is the most important thing for a working LineageOS. If you flash a build that is newer, it will almost certainly work If you flash a build with an older build date than is currently installed, you should usually get a warning when flashing first, and after that you would end up in a non-working OS with a warning about corrupted data.
By the way: flashing between LOS and iodéOS does not work, I tried it once ^___^

Hello @HolosericaCaligo !
since yesterday, the latest LOS for FP3 is available and I’m going to try updating with your methode, described above.
I have one more question about this procedure: did you install the latest LOS with or without flashing GAPPS? I think, flashing without GAPPS should be possible, because the sideload of LOS4microG will bring all the needed libraries. Is that correct?
Kind regards…

since yesterday, the latest LOS for FP3 is available and I’m going to try updating with your methode, described above.

The latest LOS build for FP3 is lineage-18.1-20220509-nightly-FP3-signed.zip, so it is from last Monday.
The latest LOS4microG build is still lineage-18.1-20220403-microG-FP3.zip which is more than a month old. Therefore, this procedure will not work until a newer LOS4microG build is available.
(assumed, that you have already installed that latest 20220403 build…)
The last LOS4microG building process for 18.1 builds kind of stopped in the middle. But since this morning there is a new process for 18.1 builds, so you might just have to wait a few more days

I have one more question about this procedure: did you install the latest LOS with or without flashing GAPPS? I think, flashing without GAPPS should be possible, because the sideload of LOS4microG will bring all the needed libraries. Is that correct?

Yes, I would definitely not flash GAPPS, it could cause chaos. 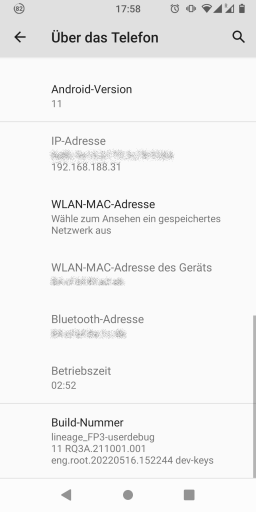 Edit: Just one annotation: after the first sideload of LOS the phone refuses the second immediately - without reboot into recovery (direct out of recovery). Running the LOS recovery, I found the advanced option to reboot the recovery. After this, the second sideload of LOS4microG was smooth and straight.