What will your next smartphone be? [poll]

Wattson.ch has a poll asking their readers what their next Smartphone will be. (scroll down a bit)

Care to help showing how popular the Fairphone is these days?

Edit by @Stefan: The poll’s question in English is:

From which manufacturer will your next phone be?

They are asking for the manufacturer, so that’s OK!

My next phone will surely be a Fairphone.

I also want my next smartphone to be a Fairphone, but I hope my present Fairphone will last for years

I also want my next smartphone to be a Fairphone, but I hope my present Fairphone will last for years 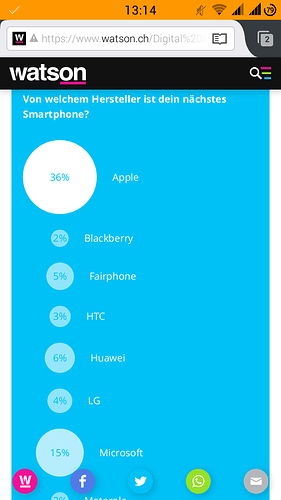 I have my Fairphone 2 just since last Friday and I’m satisfied with it. So I have not thought about the next smartphone yet. And when my FP2 reaches its end of life, I will first ask myself if I was satisfied with Fairphone and my FP2. If yes, I will stay at Fairphone if Fairphone still exists. If no, I will switch to another manufacturer who provides updates for a long time. But I hope I will not have the need for switching my smartphone in the next few years.

I’m getting excited. Since everybody else is watching the FP2 counter (I don’t because I did not order one), I’ll be watching that poll…

It’s all in German

So I could blindly click, but please let us know about what they conclude when the poll is over.

sure, but from seeing the results, I was afraid that the poll subject could be “Which brand has the best user restrictions” or “Who makes the best unremovable batteries ?”.
In that case I would mostly agree with this poll

I’m sorry, I had to vote a second time to see the current result on my computer…

Can we trust a poll about a phone with a geek userbase, who is truly able to clean the cookies from their browser and vote several times

Do you think Apple fanboys know how to do this? They are Apple fanboys because they don’t care about modifying any software, aren’t they?

if fanboys vote with all their I-things, phone, tablet, watch, … they will end with a lot of votes.

Can we trust a poll

How would I be able to look 6 years into the future? That’s how long I’m hoping my FP2 will last me!