I have a problem with the Messenger app that comes with Facebook.
When typing, at normal speed, after 3 or 4 words, suddenly the screen will zoom in on its right-hand half, obliterating the rest of the window. If I exit my text entry using Back, the problem remains. I have to exit everything, and even press the power button and go back in, to clear the problem.
I will try to attach two photos of the screen, to illustrate.
As a side problem, phone dialling is also very slow to respond to keystrokes. I can’t bang a number in, I have to creep through it.
Anyone got any ideas?
NB This time I understand that you are not paid employees of Fairphone and I so will be polite if you can’t sort it out!!

Can you post screenshots (instead of photos)? You can do so by pressing Volume-down + power buttons simultaneously. 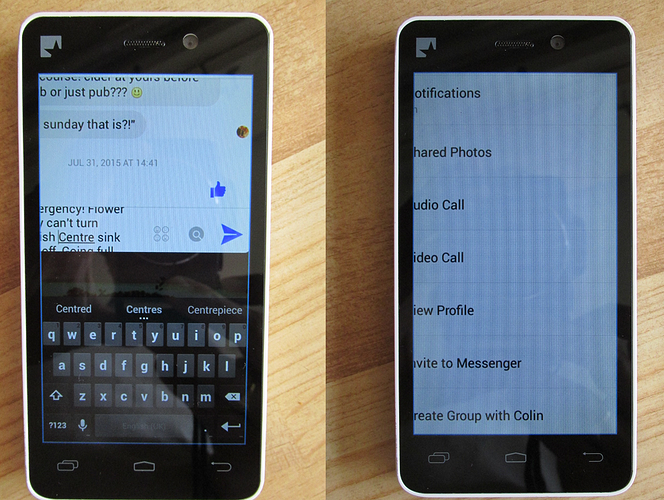 The problem always brings this blue rectangular screen outline with it.

Go to settings > accessibility > magnification gestures and turn them off. (They are activated by pressing three times on the screen.)

Brilliant!
Why was that only being triggered by Messenger, and nothing else?

It should not be triggered by the keyboard (I can’t trigger it by typing.) Zoom is only activated when I press three times in any other part of the screen. So maybe you accidentally do so in FB messenger? Or is it reproducable, if you eg type “???”?

PS: this is also stated in the magnification gesture’s screen:

Note: Magnification gestures work everywhere besides the keyboard and the navigation bar.

This topic was automatically closed 4 days after the last reply. New replies are no longer allowed.