Volume down button on the phone doesn't work after installing e/os 1.0 stable

My understanding is, when the phone is shut down you only press the Vol-Down button, did you try that?

For recovery did you try the officially way

You should perform a factory reset of your Fairphone: To protect your data when you are giving your device to someone else (i.e., selling, gifting, lending, recycling, or repairing it); or T...

Edit: as a workaround you might be able to extend the shut down menu to add recovery and Bootloader in Addition to system. Its a LOS feature that should be available on e OS on the FP3 with Iode 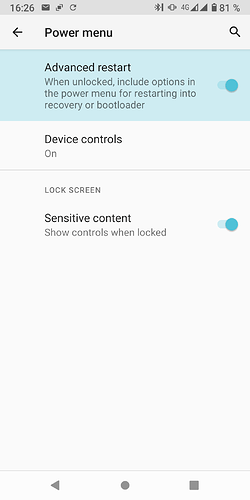 In the past it was in the developer settings

There are (at least) two ways to get into fastboot with button combinations:

Hi
RE your second point.

Even easier, from a powered off phone hold Vol. Down and plug in a USB-cable (charger is fine, doesn’t need to be connected to a PC) and you’ll end up straight in fastboot

Does this work with every cable or just most?

I’m thinking that if a cable for charging has resistors across the power lines then the phone will be able to respond as if it were negotiating with a charger and effectively ‘turn on’ as if to charge. However if the cable is an older straight through type with no such included resistors it will not work as in point 2.

I doubt the mere presence or pressure of the connection will give any signal to the phone. Mind you, there may be no such cables, or at least in modern circulation. Just checking the theory.

I don’t think the cable matters in this scenario.
Every cable capable of charging the phone will turn it on and since this is basically just a fancy way of pressing the power button I don’t see a reason this schouldn’t work.

Edit: I checked the cables / chargers I have lying around and so far they all work

OK I still don’t see how, unless “Every cable capable of charging” has the inbuilt negotiating resistors. Have unsuccessfully searched

My caveman brain just tells me cable goes in, phone turns on, must be working

@yvmuell and @hirnsushi : Thanks for your tips. I will try them tomorrow and will tell you if it works.

Its a LOS feature that should be available on e OS

To be more detailed it can be found exactly here in settings on /e/OS 1.0:

Thanks to all for your help. I followed the tips from hirnsushi and the usb-c cable is necessary if I want to use the volume down button only to access bootloader screen. I wrote the tip down on a piece of paper to remind myself later. So, I installed e/os correctly because the device state tell me ‘locked’. Now, I can use my phone with the new custom Rom.