Thank you for the advice. I purchased a new battery which I installed yesterday. I charged it to 100% before turning on, however I am still having problems. I have had 2 spontaneous reboots in the last 90 minutes, and the battery seemed to drain awfully fast last night when it was on flight mode. I’m also still getting invalid file download when it boots up (I think it’s part of it checking for system updates but it doesn’t say what application even when selecting and holding the download notification which isn’t up for very long.) I’m wondering if I need to do a reset and reinstall of the OS?? Or is the next version going to be available soon? Thanks for your advice. Nathalie

You might have a #wakelock . Plus, a hard reset isn’t a bad idea from time to time, after you’ve done a thorough backup.

FP1 running #kitkat alpha fell down, battery fell out, and I got this after booting: 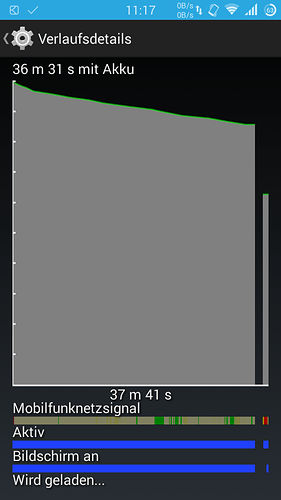 My battery is half a year old, and it was not a software issue that caused the reboot, but my fault.

My problems are similar to saraest:
It reboots on its own.
It’s not always reacting to the power button or it takes a long while.
The phone can be very slow in general (especially while updating apps, that’s so frustrating! Is it possible to stop the updates and only doing them when I like?)

I’m planning to replace my battery, but I’m wondering if that will fix all the problems. Should my power button not be replaced as well? Or can it be the software that needs an update or reset?

My phone has the same problems with rebooting and unresponsiveness.

It is not always though, my phone rebooted also when I was sleeping.

I have 3 sets of batteries, a 2 year old one and 2 new ones. I switched them several times to check if it is indeed the battery, but it didn’t change anything.

There are various possible causes and I ask you to see the #troubleshooting guide:

Please come back after you’ve tried the methods there and tell us more details.

I also have the exact same issues.

what is the #wakelock that has been mentioned, and how do i resolve it?

If you do tags correctly (wait until you can click and #wakelock::tag appears ), you can read all topics that are tagged #wakelock .

Unfortunately your #wakelock is not clickable.

A wakelock appears if an app needs background time from the CPU. Usually that is only seconds, but sometimes a malfunctioning app makes an indefinite wakelock that drains your battery.

Thanks - don’t understand tags, but will try.

Here is a short intro to tags:

We are using tags now Meta

Hi everybody, The Tags Plugin has been installed on the forum and will be used from now on. We will figure out, which tags will be used, as we go. Definition of tags They clarify content of a topic (e.g. #fp1 and #fp2 for #hardware:repairs topics ) and/or they tag a project, which has no subforum (yet!?) (like efct16) and/or they occur more than once (like moderators). Some special tags are unique, such as #dic:recoverymode . You can find a list of tags here: https://forum.fairphone.…

Hi everyone, my FP1 has the same issues for a few months now:
random reboots, unresponsiveness for seconds or minutes and fast battery draining.
I already replaced the battery last year and the one I have is not bloated.

I also did a hard reset a few weeks ago because of the reboots and the unresponsiveness. I thought that could help. Unfortunately it even seems to be worse especially with the battery problems.

id a hard reset a few weeks ago because of the reboots and the unresponsiveness. I thought that could help. Unfortunately it even seems to be worse especially with the battery problems.

I have the exact same issue. Did the wakelock thing work?

Since yesterday, my FP1 has crashed 5 times - the screen freezing in the middle of using an app and without the phone being able to reboot or power down using the power button. I then have to take out the battery to reboot. This has happened while using the facebook app, the snapchat app and also in the pull-down menu with notifications. I had several updates of apps that day or the day before.

I posted about this same issue the other day. My reboots are generally very quick though. The unresponsiveness occasionally is only solved by removing the battery.
It seems there are quite a few who are having this issue now.

Hi, increasingly in the past few weeks I'm struggling to get my phone working from the black screen. Sometimes it will light up first go, sometimes it takes a couple taps of the power button. Other times I have to remove battery. The phone is on as the LED indicates a message. Also, my phone is regularly restarting when I am proforming a task such as using an app or beginning to make a call. I'm not convinced it is a proper restart as it only takes a moment or two. Please don't tell me that …

@Jane_Elize It is not the same issue apparently. These problems can be caused by a thousand things and we here in the forum aren’t very good in fixing them remotely.

So I’m still having problems, despite a new battery and a factory/hard reset. Battery life is much better now - thank you! But still getting random reboots. They appear to be linked to apps updating (all different apps) because when it happens there is a download of an update that comes once it is back up again. I can’t prove that this is 100% but I’m fairly sure. I noticed that doing a hard reset resets everything but doesn’t reinstall the OS to base level - I’m wondering if we have a corruption in my OS somewhere. I’ve been waiting in case I get an OS update but 10 days later I’m getting annoyed with it now! Additionally the power button doesn’t always respond correctly but if I hold it down for 10 seconds or so it does, but this is only about once a day - the reboot is several times a day and driving me mad!! Any suggestions???

A hard reset usually rules out any software related issues (OS is reverted to unmodified status).

The power button can be repaired. If you don’t want to do this yourself, contact a #localrepairshop .

I had similar issues. I deleted the Facebook app and I have not noticed the reboots in a couple days. I have been accessing it through the browser. I can’t say that is definitely it and I don’t use other apps like snapchat to know if they are linked.