I dont kno why but

works in my case , i tried it several times with dd if=/storage/sdcard1/cwm-fp1-kk.0.1.img of=/dev/recovery but this doesent work.

Chris updated version 0.96 if im correct. What did you mean with Chris did not update his mod since 2014??

Do you mean this http://forum.xda-developers.com/fairphone/orig-development/rom-cyanogenmod-11-4-4-4-kitkat-t2862874??

Sorry, missed that. You’re referring to his (other) KitKat port. Note that it is NOT a CyanogenMod port. You probably meant to post in this topic:

It works still great! Thanks a lot!
I now tried the Nova launcher and it works much faster and smoother as with the original launcher, at least for me.
The problem is that the Nova launcher is not open source and uses internet. I do not like this, so I blocked all Internet for it with xprivacy and it still works

Just for your information…

I have installed Verion 0.96 Yesterday and nearly everything seems to work well! Thank you very much for the good work!!!

The only Problem I have is with pairing Bluetooth LE Devices.
I have a Suuntoo Ambit 3 Peak and a VivoFit2 Device. Both appear as devices under Settings/Bluetooth but the Apps (Movescount from Suunto and Connect from Garmin) are not able to detect ore pair them.

Any Hints - or anything I can do to support you and your work?

I think Fairphone should hire you ti improve their Customer Service!

One issue I have noticed: My battery seems to drain faster than with the stock firmware.
(But this is entirely subjective - I have no measurements to prove this. Or the end of life of my second battery is coming nearer. Or it’s the weather - more sun light -> brighter display.)

Or it’s a calibration issue maybe?

With the original firmware I experienced a slowly declining battery charge stopping at ~ 15 % and staying there for a while before quickly dropping to zero.

With flashing this firmware I tried recalibrating the battery (I used an app called BatteryCalibration to delete battery stats) and this led to a more realistic decline of the charge that android displays. Furthermore I now always charge my phone to 100 % before flashing a new firmware.

Janxgeist -> I have the same problem you, I have a Suunto Ambit 3 Sport.

Have you got to run your fairphone with movescount?

Thank you and Best regards

I don’t know either. But I know that the updater script in each of the update packages checks one of these and stops if it is set to something different. If you change it by yourself, you have to change the update script (inside the ZIP file) as well each time you update.

With the 0.9.7 update my Fairphone 1 does not start the OS. It hangs on “Loading…”. When I reinstall 0.9.6 my phone boots without any problem. Anyone with the same problem?

Loading/Rebooting looks ‘normal’ here. I used adb sideload to upgrade from 0.9.6. I do not have GAPPS installed.

Have you ensured that the checksum is correct? Normally I would recommend to try a clean install, but 0.9.6 -> 0.9.7 worked here. Upgrading/reinstalling xposed worked as well.

The upgrade worked for me, too.
One weird thing I’ve encountered: After the upgrade my phone didn’t reboot. Instead it shut down. I had to manually turn it on again.

Thanks for your replies @YtvwlD and @fp1_wo_sw_updates! I did not sideload the zip, I used the CWM bootloader. I will try it again with sideloading, hopefully that helps

I will try it again with sideloading, hopefully that helps

Maybe you can also tell us how the installation looks like.

Normally you should see something like that on your computer:

and something like this with the green robot on your cell:

You could also try to clean the phone’s cache from the recovery. It could be that you have some strange app that has dex issues.

And if nothing else works, data as well. But keep in mind that this will remove your data (all settings related to applications).

I use recovery wipe data and wipe cache if a phone “hangs” during a boot. Normally you can see this in the adb logcat message, but just cleaning them is often easier than explaining whole process. I also have lost track how the whole stupid java stuff works anyway.

Hello Oslalo,
actually I got the stock rom 4.4.4 to run on my Fairphone 1 and was able to download and install the Movescount App, but I’m still not able to do the pairing between the Suunto Ambit 3 and the Phone.

Updated but been using the FP2 (

) so now that I’m waiting for my FP2 to be repaired, I come back to my favorite phone!!! 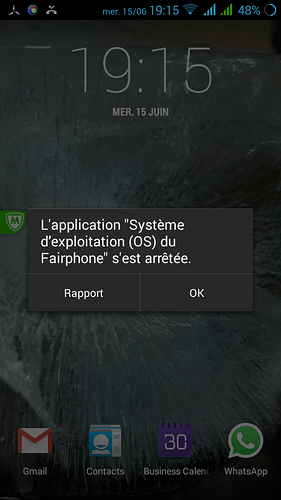 I don’t know why…

Maybe that it this OS interacts poorly with the FP launcher?

I probably missed something, but where can I upgrade to 4,4,4 Kitkat, officialy provided by Fairphone ?

OK, sorry Chris, I found the answer on the blog.

And thanks for the great job you did.