United Nations’ Momentum for Change climate change award: Fairphone one of the winners

I just found a blog post of the UN Climate Change Newsroom published recently on the winners of the United Nations’ Momentum for Change (climate change) award and was happy to see that Fairphone is one of them.

I think it is worthwhile to have a look at the other winners as well: 16 Game-Changing Climate Action Initiatives Announced

Edit: I just added the link to Momentum for Change. Thanks to @kevr1990 for adding the specific link on Fairphone.

Why hasn’t Fairphone made a song and dance about this?

Here’s some details from them on Fairphone in particular.

Not sure either - perhaps they are just really overwhelmed

But I’m surprised it didn’t make their latest email. Maybe they’ll make up by livestreaming the award ceremony later

4 posts were split to a new topic: Facebook to Forum connection / Microblog

Do you refer to the email about the delayed delivery? I saved it locally on my home computer and may not have read it carefully enough since I already read the blog post before getting the mail… I’ll check later.

It included (at least) two press links referring to the UN award: eco-business.com and univision.com. 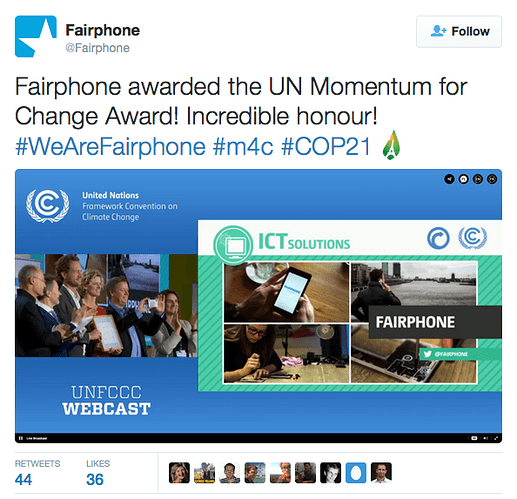