Unable to use 3G or LTE with o2 Sim card

Hi there,
I can’t get connectivity via 3g or LTE at my main sim card which is an o2 -contract card.

At celluar netwok settings I can’t choose the "preferred network type"
-its set to “mode: 2G only” (with my second card -a vodafone- 3g/LTE is
set by default and works without problems.) in the case of the o2 card
its grey colored and I can’t take any actions.

Here is what I did so far:

Nothing helped so far. Would be really great to have a solution here.

Any one else has similar problems? 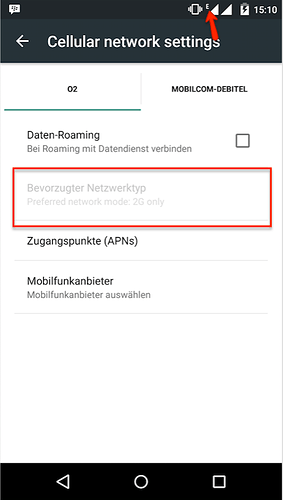 Do I get you right?

Your second SIM is set to 3G/LTE and your first doesn’t work at 3G at the same time?

I think that’s pretty much normal behaviour. The phone has only one modem, so you can have only one data connection at a time. I do not have my phone yet, but you’ll have to set second SIM to 2G before setting SIM1 to 3G.

I think that the phone can only use 3G or 4G of one SIM at once. The other one only can use 2G. So if you want to use it with your O2 card, you have to change it in the settings. Your screenshot looks so different to my FP1 settings so I can only guess that you have to switch it off in the settings of your other card in order to be able to switch in on for O2.

@retsifp you made my day!!! Works know! -I turned the 4G mode to 2G for the second sim card, afterwards I was able to switch the mode at Sim card one (o2)