Unable to get 3G

I have recently bought a fairphone 2 with the Phone Co-op and have never been to get 3G. I have followed the instructions on the video on the website and have check the APN setting many times but still nothing. I have also tested my sim card on a different phone and the 3G works fine. Fairphone have just sent me a replacement phone but still nothing. The only connectivity I get is “H”.

H stands for one of the technologies commonly known as 3G. Often it’s said to refer to HSDPA, which is part of HSPA. Or, as wikipedia puts it:

Perhaps your other phone just uses a different indicator, or doesn’t discriminate between the 5 or so different flavours of 3G?

Edit: Just in case this is relevant: I just heard that iPhones will always show a 3G icon (for any of the 3G types), but for H or H+ connections show an additional indicator. In Android there is only icon to show the connection, which can then be H or H+ for those types of 3G connection.

Ok thank you. Yes it only ever shows H or E, or often has no connectivity altogether. Does H also refer to 4G?

Does H also refer to 4G? 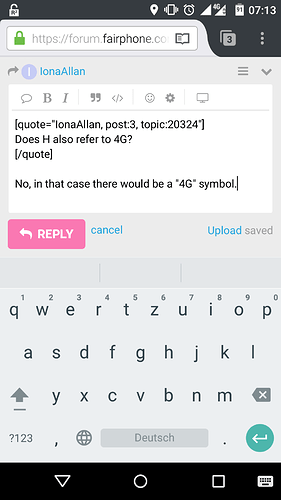 Ok well I don’t seem to ever get 4G either even although I have spoken to my provider (EE/Phone Coop) and they have said I shouldn’t have any issues with 4G in the area I live in.